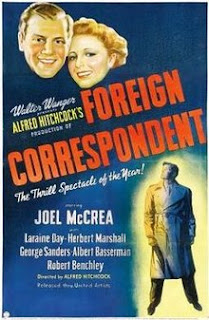 In 1940, Hitchcock was new in America, after a parade of successes in Britain. 1940 was a red-letter year for the master, directing not one but two of the films up for Best Picture. The Oscar was carried home for his masterful gothic adaptation of Du Maurier’s Rebecca, but equally memorable was Foreign Correspondent, a stirring, heartfelt thriller about the build-up to war in Britain, a passionate cry for American intervention and brilliant propaganda contribution to the British war effort (even Joseph Goebbels tipped his hat to it).

John Jones (Joel McCrea) is the new foreign correspondent in Europe for the New York Morning Globe. Given the pseudonym “Huntley Havestock” (because it sounds better), Jones is picked out because he’s a hard-boiled crime journalist, practised at winkling out a story, rather than the cozy posh boys usually sent out to Europe. In Amsterdam, Jones attends a peace conference hosted by leader of the British peace party Stephen Fisher (Herbert Marshall), where eminent Dutch diplomat and architect of the fragile European peace Van Meer (Albert Basserman) is due to speak. While Jones falls in love with Fisher’s daughter Carol (Laraine Day), Van Meer mysteriously falls to show at the dinner – and arrives at the conference the next day only to fail to recognise Jones and immediately get assassinated. Suddenly Jones finds himself in the middle of a dangerous game of spies with only British journalist Scott ffolliott (George Sanders) and Carol to help him.

Hitchcock’s Foreign Correspondent is a masterful spy caper, in the style of many of his early successful works such as The Thirty-Nine Steps, superbly assembled by a genius at the top of his game, with access to funding and techniques beyond what he had in Britain. Hitchcock went through several versions of the script – there were no fewer than nine writers who worked on this film, four of whom are credited – but it matters not a jot when the script they finally came up with matched such superb, zingy, screw-ball style dialogue with such brilliant set-pieces. 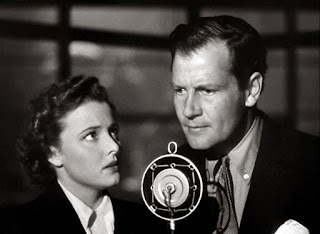 The film also had a serious purpose as well. From the start, this is a cry of one of Britain’s most prominent ex-pats to his newly adopted nation to join the effort to preserve Western civilisation against the onslaught of Nazi oppression. Joel McCrea’s Jones – a part written for Gary Cooper, who forever regretted turning the role down – is the quintessential American, disinterested in the world, sure of America’s place in it, who has his eyes opened and passion ignited by seeing up-close and personal the dangers from the agents of totalitarianism. The agents of the enemy nation – probably Germany, a country that is referenced in passing, but the film deliberately keeps it shady in an attempt to appear even-handed – are ruthless, brutal and unscrupulous. Their plans are fiendish and they are bent on world domination. But all this is worn very lightly within a caper framework that has as much interest in Jones falling in love with Carol as it does with foiling the baddies.

It also plays neatly on Jones’ very old-school American obsession with fair-play, and bringing down the baddies no matter what. Witnessing Van Meer assassinated before his very eyes, Jones is determined to go to any lengths to ensure both that justice is done and he is the man who gets the story. At the same time, Jones also has an honest and homely sense of romanticism about him. The film gets a tonne of comic and romantic mileage out of the cracking dialogue between McCrea and Loraine Day as Carol, with the sort of intelligent, witty banter that wouldn’t seem out of place in a screwball comedy, with Jones’ blunt “I say what I mean” attitude crashing beautifully against Carol’s more English rectitude.

Hitchcock shows himself a brilliantly adept director of comedy – something he doesn’t get enough credit for – in these sequences between the two of them sparring over the course of the movie. And it’s not just them, but also his work with George Sanders – cast against type as a cool, noble British agent – brilliantly hilarious as the curiously named “ffiolliott” (the sequence, mid car chase, where he calmly explains to the befuddled Jones while bullets fly why his name deliberately has no capital letter is hilarious). Comedy is a rich vein in Foreign Correspondent and it works so well here because it lightens both the drama of the thriller elements and the political message of “pro-intervention”. 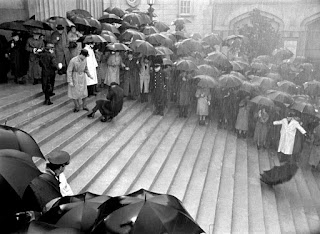 The thriller sequences are just as superb. The assassination sequence is a stand-out, a shooting on a rain soaked series of steps outside a conference, with the assassin making his retreat through a crowd of on-lookers carrying umbrellas under hot-pursuit from Jones. Hitchcock takes his camera above the crowd, meaning we only follow its progress through the disruption of the umbrellas, before the two men emerge (bullets flying) and move straight into a breathless car chase through the Dutch countryside. It’s a masterful sequence.

And it’s far from the last. The film has a superb series of tension-filled sequences, from Jones playing an elaborate game of cat-and-mouse in a Dutch windmill, trying to avoid being seen by the German agents occupying it while finding out as much as he can about their plans, to Jones reporting what he has found to a man we already know is a double agent. Edmund Gwenn, cast well-against type as a jovial, remorseless assassin, gets a brilliant sequence of attempts to kill Jones without putting him on guard, culminating in a vertigo inducing sequence at the top of Westminster Tower. It’s the second such sequence, Jones already having to climb over the roof of a hotel in Amsterdam to escape assassins (along the way brilliantly hitting the neon sign of the Hotel Europe so that it reads “Hot Europe”). Hitchcock tops it all with a brilliant plane-crash sequence shot with chutzpah and daring and is a technical marvel considering the resources available in 1940. 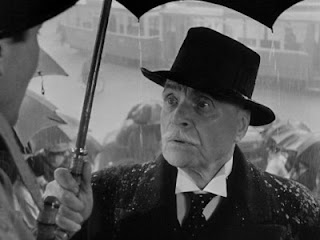 All this excitement and adventure helps to deliver the message of the film as strongly pro-interventionist to encourage the Americans to enter the war on the side of the Allies. Van Meer (a fabulous performance from Albert Bassermann of old-school nobility, made even more astonishing by the fact he didn’t speak a word of English and learned it all phonetically) has a brilliant, impassioned speech – all the more affecting for its  lack of histrionics – that condemns the brutality and violence of the dictatorships. The film is capped with Jones’ Ed Murrow-style broadcast from Blitz-besieged London. Both sequences raise genuine lumps to the throat – McCrea’s delivery is perfect – and the final sequence is all the more astonishing when you realise it was conceived and shot before the Blitz even started.

Not that the film is completely obvious in its allegiances. The turn-coat Brit in the film is a complex, even sympathetic figure who is merely serving his actual home country in the best way possible. He’s largely presented as reluctant to commit crimes, but believing that they must be done and is even allowed a heroic death. His identity perhaps is fairly guessable (he even has a Germanic dog!) but it still works very well in the film.

Hitchcock draws superb performances from the cast – helped by that script of zingers. McCrea is just about perfect, Day very sweet, Sanders is brilliant, Herbert Marshall’s Stephen Fisher a brilliant portrait of arrogance and tortured duty, Robert Benchley very funny (and writing his own scenes) as Jones’ colleague who’s struggling to stay on the wagon, Harry Davenport superb as Jones’ His Girl Fridayish editor. Basserman was Oscar nominated – and deserves it for his big speech – but it could have been any of the cast. Hitchcock’s Foreign Correspondent is often overlooked among the master’s many, many triumphs. But any pro-interventionist, anti-German film that has even Joseph Goebbels singing its praises must have a fair bit going for it.
Email ThisBlogThis!Share to TwitterShare to FacebookShare to Pinterest
Labels: Action Films, Albert Basserman, Alfred Hitchcock, Edmund Gwenn, Eduardo Cianelli, George Sanders, Harry Davenport, Herbert Marshall, Joel McCrea, Laraine Day, Robert Benchley, Spy thrillers