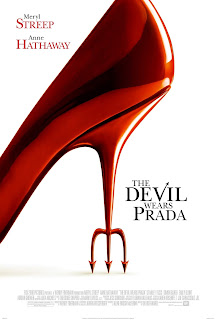 Miranda Priestly (Meryl Streep) is the lord of all she surveys. Ruling the fashion industry from the editorial office of her magazine Runaway, she can make or break careers with a pursed lip or a raised eyebrow. And, while barely raising her voice beyond a whisper, she expects total obedience and deference in the office, with her assistants little better than personal slaves. It’s a tough world for wannabe journalist Andrea (Anne Hathaway), hoping for a big break from her connection with Miranda. Andrea looks down on the world of fashion, and longs for a serious journalism career – but will her ideals survive the temptations on offer…

The Devil Wears Prada is your pretty standard morality tale of the moth brought too close to the flame: the hero struggling to resist the temptation to jack in their principles and dreams in order to win the praise of a domineering bully and secure riches and fame. We’ve seen it all before, and to be honest TDWP doesn’t really do anything different from this formula, other than introduce it into the world of fashion and making both the tempter and tempted a woman.

And it works where it does because it has some pretty impressive women in these roles. None less than Meryl Streep, who seizes on the role with a quiet relish and has the confidence to underplay scenes that lesser actresses would tear into as if their only dinner that day was the scenery. What’s notable about Streep’s Miranda is that she is so calm, so quiet, so assured, so unflustered that she only needs the slightest gestures and hints to break people around her. It’s the ultimate confidence that comes from supreme power – she knows she never needs to raise her voice, that people will fall silent to listen to her. Streep also mines her considerable comic talent to lace her many moments of cruelty and selfishness with an arch, dry humour.

It’s no wonder poor Andrea has such a rough time in this film. Only in Hollywoodland could Anne Hathaway be considered a dumpy frump, but the styling of her as a someone with no sense of fashion whatsoever (at least initially) does at least make her stand out from the rest. Andrea’s plotline follows what so many other “moth to the flame” plots have followed, moving from snide indifference to her job to all consuming obsession as she begins to parrot the same values and opinions of her master. She even has a partner (usually the woman’s role, so very nice to see it reversed) who complains about her not being at home enough. 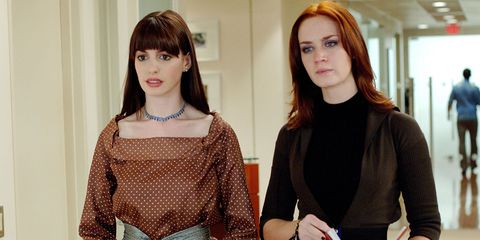 The film avoids cheap shots at fashion as well which is refreshing, stressing at every point that it is a world of legitimate art and expertise and has made an important contribution to the culture and society of the 20th century. No wonder so many fashion famous faces cameo. Andrea’s scornful disregard for fashion is punctured early on as being an inverted snobbery and part of her desire to project an image of herself.

The real issues here are workplace bullying – although the film never really delves into it that much and is eager to leave no real resolution. Emily Blunt – who is extremely good, with more than a hint of desperation and depression under her cool, arch, British exterior – as Andrea’s fellow assistant shows early on how environments like this chew people up and force them to become sharks or die. It’s a suggestion the film is not keen on exploring in real depth though, preferring a far lighter, more traditional story as we wonder whether Andrea will be seduced by the darkness or will return to her roots of integrity and journalism (one guess which way she goes).

Even at the end though, Andrea is still desperate in some way for Miranda’s approval and to be acknowledged in some way by her. It’s a feeling that the film shares. It wants Miranda to turn to it and praise it, it’s scared of really calling her out on her behaviour, instead wanting to cut her as much slack as possible. It wants to see her triumph and, even at the end, to take a wry pleasure from Andrea forging her own life. It’s as besotted with her as the characters are, and for all it shows that Andrea doesn’t do well from spending time with her, it still seems to want to show that under it all “she is human”. It dodges the bullet of actually dealing with bullies and monsters, and instead takes the line of saying “yeah sure she was bad, but she had great style so you can’t not like her.” Which means, in a way, it follows the same line that in real life allows charismatic geniuses in the workplace to continue behaving any way they like.

Which isn’t to say this isn’t a fun film with decent performances and lots of good jokes. Streep gives Miranda a huge degree of depth – we have moments of her loneliness and isolation from her family – but it’s a film that could have done more to show the negatives of how working lifestyles like these affect people. I guess that would have made it less fun though.
Email ThisBlogThis!Share to TwitterShare to FacebookShare to Pinterest
Labels: Adrian Grenier, Anne Hathaway, David Frankel, Emily Blunt, Journalism, Media satire, Meryl Streep, Simon Baker, Stanley Tucci