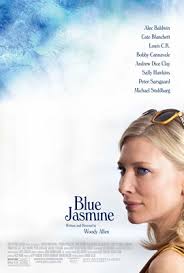 Every so often an actor intersects with a director and, such is the actor’s brilliance, they seem to take the film by the scruff of the neck and almost carry the director along to success. Such is the case with Blue Jasmine, a film so seized upon, so wonderfully played and brilliantly observed by a truly phenomenal (she won every award going) Cate Blanchett, you feel Woody Allen just let the camera record her work and carefully built the film around her.

Allen’s film, easily one of his best of his troubled later years, is a modernised remix of Streetcar Named Desire. After a Ponzi scheme scandal leads to her husband Hal’s (Alec Baldwin) arrest and suicide, Jasmine (Cate Blanchett) finds herself landing in the poor end of San Francisco and sharing a house with her sister Ginger (Sally Hawkins). Ginger’s marriage to Augie (Andrew Dice Clay) collapsed after Hal’s dirty dealings destroyed their lottery win landfall. Jasmine, teetering on the edge of a nervous breakdown, living half in the present and half in an imagined version of her own past, soon clashes with Ginger’s new boyfriend Chili (Bobby Cannavale) and eventually finds hope for a second chance with diplomat Dwight (Peter Sarsgaard) who is oblivious to her background.

The parallels between Blue Jasmine and Streetcar should be pretty clear to anyone reading that summary, and Allen draws some neat modernisation parallels (and thankfully, and wisely, drops the rape plotline that ends that play) between the two. Placing Blanche/Jasmine as the trophy wife of a corrupt businessman, who has shut her eyes to his dealings and let her own intellect drain away in shallow frippery, works really well. Not least dramatizing very well the cultural shift from this extreme wealth (detailed in a series of cleverly interwoven flashbacks) to the relative poverty of normal life.

But the film really works from the super-intelligent, hyper-brilliant, eye-catching wonderfulness of Cate Blanchett in the lead role. This is one of those performances for the ages, a tour-de-force of fragility, self-pity, self-deception, hostility, undirected anger, desperation and pain that dominates and shapes the entire movie. Blanchett is particularly effective because she never, ever overplays the role, but let’s these complex, contradictory emotions play constantly behind her eyes and slowly seem to dribble out until they dominate her entire body. Several times, Allen plants the camera and allows us to simply watch Blanchett go through various stages of mental collapse in front of our very eyes, with this amazing actress able to seemingly fall apart in slow motion in front of us.

Jasmine is a complex and fascinating character, in some ways hugely unsympathetic. She’s a massive snob, she certainly feels the world owes her something (she flies into San Francisco first class complaining she has had to sell everything just to make ends meet, while dragging Louis Vuitton luggage behind her), she lies when she needs to and treats everyone around her with a slight air of condescension. But she’s also  incredibly vulnerable, and carrying a great deal of guilt and pain, as well as only barely able to deal not only with the loss of her privileged lifestyle, but also her growing (but denied) realisation that the price of the lifestyle wasn’t worth the having it.

The film throws her into a series of contexts that show her at her best and worst, as victim and as fantasist. Getting a job at a dentist’s reception desk – a job she seems to only barely have the patience or aptitude for – she is forced to see off the unwelcome advances of her creepy boss (played with a passive aggressive sleaziness by Michael Stuhlbarg) with horror. Later though, she wilfully deceives Dwight (a fine performance of assured arrogance by Peter Sarsgaard) about her background and character. She is partly right in her assessment of her sister Ginger having a very low opinion of herself, so only pairing herself with men who treat her badly; but Chili is also right about her having no regard or time for her sister when she was wealthy.

The use of flashbacks throughout the film works very well to show us Jasmine before and after her economic crash. What’s fascinating is that her fragility is an ever-present, kept suppressed under a shower of gifts, but quickly coming to the fore when Hal’s (has there been a better role for Baldwin than this jovial, greedy cheat?) serial infidelity is bought to her attention. It also serves to remind us to keep Jasmine at a certain distance, her own evaluations of what her past life was like frequently not squaring with the version we see.

All of this hinges on Blanchett’s brilliant work, but she’s not alone in delivering a fine performance. As her blousy sister, moving like a weathervane from person to person, changing her opinions quickly depending on her recent experiences, Sally Hawkins is possibly at her best here as well. Andrew Dice Clay is excellent as an honest Joe who hovers over the film like an object of destiny. Bobby Cannavale does some very good work as a feckless but sort-of honest Stanley Kowalski.

Allen’s direction is calm and almost in awe of Blanchett, and that’s fair enough because whatever you look at, it comes back to her striking genius in the film. Blue Jasmine may remove some of the depth that Blanche has (with her life of pain and guilt in the play’s backstory) but it substitutes that with a gripping exploration of a long-running mental collapse that is so movingly and superbly brought to life by Blanchett you can’t help but be engrossed by it.
Email ThisBlogThis!Share to TwitterShare to FacebookShare to Pinterest
Labels: Aldren Ehrenreich, Alec Baldwin, Andrew Dice Clay, Bobby Cannavale, Cate Blanchett, Louis CK, Michael Stuhlberg, Peter Sarsgaard, Sally Hawkins, Woody Allen