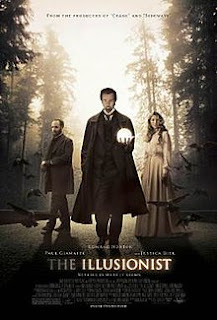 In 2006, The Illusionist was the other film about nineteenth-century magicians that wasn’t Christopher Nolan’s The Prestige. As such it got rather overlooked, which is unfair as this is a handsomely made, intriguing little puzzle which doesn’t reinvent the wheel but does what it does with a fair amount of invention and beauty.

In turn-of-the-century Vienna, the illusionist Eisenheim (Edward Norton) is a revelation – a mystery character whose past is investigated by Police Inspector Uhl (Paul Giamatti) under the orders of Crown Prince Leopold (Rufus Sewell). The Crown Prince feels Eisenheim’s illusions – which suggest at times dark truths in the Prince’s own personal life – are a serious risk to his position. On top of which, there is a secret past romance between Eisenheim and the Prince’s intended wife Countess Sophie (Jessica Biel), and the Prince is not a man to be crossed. So begins a cat-and-mouse game of trick and illusions between Uhl and Eisenheim.

The greatest thing about Neil Burger’s period piece is the grace and beauty with which it has been filmed. Dick Pope’s mixture of sepia tones and candlelit blacks makes for a series of gorgeous images, contrasted perfectly with Philip Glass’ beautiful score. Both contribute hugely to creating an atmosphere of mystical unknowingness around the Vienna locations, and give the film something in every scene to delight the senses.

What works less well is the slightly routine scripting and filmmaking that pulls the film together. For all the beauty with which it is presented, there isn’t quite enough of the original or – for want of a better word – the magical about what we see on the screen. The story is just ever so slightly too familiar, the points it intends to made – be it about the nature of power, or magic, or love, or hope – never quite coalesce into a coherent and clear message that really feels like you are being told something or shown something you haven’t seen in several movies before.

Instead we see that behind the eyes of even the most obscure and unreadable conjurer there is deep and abiding love – love that will push them to do wild, even morally questionable, things. For others like the Crown Prince, that love is tied in altogether with possession and power and that there is no place for truth. Illusion is in all things: from Eisenheim’s entire life to the Prince’s front as a man of the modern world and his desire to become a dictator. Maybe that might be as close as the film gets to a deeper meaning – that illusion hides and protects our truths.

As Eisenheim’s tricks get closer and closer to mesmerism and séance, the film suggests that it is a human need to want to see the truth behind tricks. The crowds who see Eisenheim raise the dead in flickering images want to believe it, that they could talk to their own deceased loved ones. Even in his early magic tricks, the less poetic characters of the film see value in the tricks only when they feel they have worked out the illusion behind it. Both are looking for a form of truth in the illusion, but the truth behind the trick is often deeper and more complex than the mechanical process by which it is done.

It’s a shame the film doesn’t tackle these ideas more, and settles for a more traditional “love across the divide” romance, but perhaps it doesn’t quite engage because Eisenheim and Sophie aren’t really interesting enough characters. Edward Norton plays Eisenheim with grace and intelligence, and draws a lot of depth and emotion from scenes that often require him to wordlessly stare. But juggling a character who deliberately conceals the truth and his intentions at every single turn seems slightly to have straitjacketed Norton, an elliptical actor at the best of times. There is something unknowable about him in this film which, while perfect for the character, makes him one you can’t really invest in. Similarly, Jessica Biel (a last minute replacement for Liv Tyler after filming had started) certainly looks the part, and gives Sophie a warmth, but she never really makes an impression as a character. Rooting for these two star-crossed lovers is difficult because we never get a sense of who they are.

Instead the film is dominated by hard-nosed rationalist Inspector Uhl, a man with a curiosity for conjuring, an appetite for power, a determination to get things done, but finally more than a bit of humanity. Paul Giamatti is excellent in the part, playing a role that emerges as the audience surrogate, trying as hard as we are to work out what is real and what is illusion. He doesn’t put a foot wrong with Uhl’s affable professionalism nor his ability to switch to business-like harshness. He’s also adept at playing a man who is the third smartest character in the film, but believes himself to be the smartest. You could also the same for Rufus Sewell’s (also great and clearly having a ball) Crown Prince, a bully who thinks he is an enlightened man.

It’s Uhl whom the film finally bonds with the most, and it’s his attempts to piece together what’s going on that becomes the most engaging thing in the second half of the film. For all the beauty of its making, and the skill that has gone into creating the optical illusions (some of Norton’s sleight of hand tricks in this movie are extraordinary), it’s a film that doesn’t quite satisfy. When the final reveal occurs in the film’s closing moments, you won’t quite be as satisfied as you would expect, perhaps because you won’t really care about Eisenheim or Sophie. Burger has made a handsomely mounted but strangely cold film.
Email ThisBlogThis!Share to TwitterShare to FacebookShare to Pinterest
Labels: Aaron Taylor-Johnson, Eddie Marsan, Edward Norton, Eleanor Tomlinson, Jessica Biel, Neil Burger, Paul Giamatti, Rufus Sewell