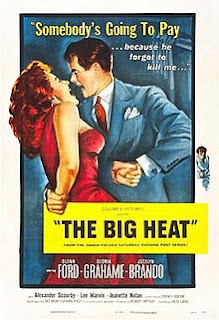 Films like Fritz Lang’s The Big Heat were generally seen at the time as easy-to-overlook pulp thrillers. Today however, they are seen as classics and few look as ahead of their time as The Big Heat, a skilfully constructed, almost nihilistic, revenge thriller that turns its view of America into that of a land big, grim and full of corruption.

Detective Sergeant Dave Bannion (Glenn Ford) is called in when a senior policeman is found to have committed suicide. All is not what it seems though: the wife Bertha (Jeanette Duncan) doesn’t seem as sad as she should, there are conflicting reports that the death might be suicide and the dead man’s possible lover is found brutally killed shortly after Bannion talks to her. Bannion is a stubborn, bull-in-a-China-shop type, so he quickly assumes smooth local gangster Mike Lagana (Alexander Scourby) is connected up in all this, not least after his wife Katie (Jocelyn Brando) receives a threatening phone call. But Bannion’s methods lead to tragedy, and he soon finds himself going rogue to find justice, with the eventual help of Debby Marsh (Gloria Grahame), gangster’s moll of brutal sadist and Langana lieutenant Vince Stone (Lee Marvin).

Lang’s film is a strikingly un-rose tinted view of America. The very first shot of the movie is a gun, and violence is endemic in this corrupt world, where justice is for sale. We barely see a character who doesn’t have some whiff of corruption. Bannion finds cops doing guard duty outside Lagana’s home while he throws a party and half the higher-ups in the department are either in the pocket of the gangsters, or determined to do as little as possible to rock the boat. The lives of the families of those causing trouble for this system don’t account for much either, with any unpalatable truths brushed firmly under the carpet.

Thown into the middle of this is Glenn Ford’s Detective Bannion. At first glance Bannion looks like exactly the hero we would want – a straight-down-the-line type who says what he thinks, and determined to let nothing stand in the way of, or water down, his investigation. Better known for comedies, Glenn Ford is very good as this bullish man, who very clearly thinks of himself as “the only good cop in town”, and whose determination to stop at nothing very soon tips over into recklessness. Because reckless is what he is: Bannion is fixated on revenge after a tragic attack on his family, and he has no compunction – or even it seems moral awareness – that this path causes danger and consequences for other people around him.

Bannion’s situation is largely self-inflicted – is it sensible going straight to the house of a leading local gangster and threatening and humiliating him? – and Bannion turns out to be largely a destructive force for those who meet him. Most affected are the four female characters he interacts with in the film. A mixture of innocent, corrupt, in denial and cruel, all four of these women find themselves thrown into often mortal danger, with Bannion barely stopping to consider the risks to them. Bannion, it becomes clear, is the ultimate ends-justify-the-means kind of guy, willing to accept collateral damage of almost any kind if it means he can take down the bad guys who have done him wrong. It makes for an intriguing anti-hero at the film’s centre, with Bannion increasingly resembling a sort of proto-type Dirty Harry, the hard-boiled cop who’ll do things his way and damn the consequences.

Mind you, it doesn’t mean he isn’t right about the corruption in this damn dirty town. Preening gangster Mike Lagana (played with a wispy arrogance by Alexander Scourby) has everyone in his pocket, and couldn’t give tuppence for any small fry causing him problems. First introduced lazily in bed setting in chain events that will cover up the reason for the suicide of a leading policeman, he has fingers in every pie. He’s also – the film economically suggests – sexually indiscriminate and a bit of a mummy’s boy to boot, sure signs of cadism in any 1950s detective story. His decadent home and personal cowardice (for all his speed in ordering deaths) make his corruption probably even more galling for straight-shooter Bannion.

In fact, I’m not sure Bannion can even accept Lagana as a “worthy foe” and he increasingly zeroes in on Lagana’s number two, the brutish Vince Stone as the man he intends to take down. Played with a star-making swagger by Lee Marvin, Stone is a force of nature, an act-first-think-next-week kind of guy, who terrorises people around him and will resort to anything from fists to pots of boiling coffee to exact obedience. Marvin scowls and prowls his way through the film like a caged bear, constantly on the verge of violence. It’s a brilliant performance.

It also makes clear why he’s pushed Debby – played with a wonderful fragility behind all her femme fatale looks by Gloria Grahame – so far under his thumb. As she says, why intercede against anything he does when she could be next to take a beating. Grahame is excellent as a woman who has suppressed her conscience about what is going on around her, and learned to use her sexuality as a tool for getting what she wants. Watching her slowly begin to come to life as a moral force provides one of the film’s finest stories – her desire to do the right thing and get revenge, a firm contrast with Bannion’s more hardline goals.

All of this is packaged neatly and without fuss by Lang into a superb indictment of America. Every official is at least shady, if not outright bent. Every scene bubbles with the possibility of violence and danger. The innocent are swiftly trampled and the heroes need to bring themselves down to the same brutal, intimidating rough and tumble as the villains to have any chance of cracking the crime. Bodies pile up, lives are ruined, but at the end you still wonder if any of it will have any lasting impact. For Lang it feels like America is a constant spiral of danger and corruption that begins and end with a gun. Either way The Big Heat is a true classic.
Email ThisBlogThis!Share to TwitterShare to FacebookShare to Pinterest
Labels: Alexander Scourby, Detective story, Film noir, Fritz Lang, Glenn Ford, Gloria Grahame, Jeanette Nolan, Jocelyn Brando, Lee Marvin, Thriller