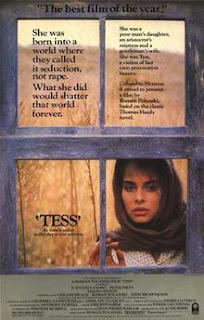 At first sight it looks like a rather odd project for Roman Polanski: a faithful adaptation of a Thomas Hardy novel, shot in sumptuous period detail. But look a little closer and you’ll see it’s a neat fit for the director’s interests. A human interest story that revolves around the man’s capability for misusing, abusing and disregarding his fellows. With isolation, despair and depression thrown into the mix (what do you expect, it’s Thomas Hardy?!) and a depressing conclusion (again, it’s Hardy…) it feels less and less like an anomaly in its director’s CV. On top of this, it’s the film Polanski planned to make starring his murdered wife Sharon Tate (the film is dedicated to her memory).

Tess (Nastassja Kinski) is a young girl growing up in 1870s “Wessex” (Hardy surely the first major writer to create his own universe of interlocking stories in a fictional location). Her life is thrown into chaos when her father (John Collin) learns his family descends from the ancient lineage of d’Urbervilles. Tess is sent to find work and, maybe, fortune with her “cousin” Alec Stokes-d’Urberville (Leigh Lawson). But instead of a place at the family table, she finds herself charmed and then seduced (and perhaps raped) by Alec, leaving the house disgraced and pregnant. A few years later, she meets would-be-farmer and idealistic parson’s son Angel Clare (Peter Firth) – but their marriage cannot survive revelations of her past. As Tess’ life unravels, she is thrown into ever more desperate situations that entangle both men in her life with fatal consequences.

Polanski’s film is shot with a wonderful eye for period and makes extensive use of the “magic hour” (just after sunrise or just before sunset) to place some truly gorgeous images on the screen. Despite this, the film never compromises on the grinding lack of glamour in poverty, and few period dramas have had such an eye for mud, uncleanliness and shabby huts and bedding arrangements than this one. Polanski spent years making the film in several carefully selected locations, designed to make France look as much like Dorset as possible (for obvious legal reasons, Polanski had to rule out filming on location in England).

In this, Polanski creates a heartfelt drama of human suffering, with Tess repackaged as a sort of “every-woman” sufferer, whose entire life is shattered by a passing comment made to her father by a distant clergyman (a man whom we never see again). It’s part of Polanski’s theme of how events that we have little or no control over can shatter our lives and change the entire path of our existence. Tess frequently finds her life changed or altered by the actions of third parties (from the parson who speaks to her father, to the parish do-gooders who find the working boots she has quietly taken off to make a good impression for people she never meets and take them to a poor house – the sort of stunning moment of bleak “blow-upon-a-bruise” that the film does so well) and has no real power over what happens to her.

When she does finally take decisive actions with the two men in her life, both events rebound with tragic consequences on her – first with her rejection by Angel and then by her final escape from the influence of Alec. In between, we see her drifting gloomily from location to location, never able to find the energy, will or strength to make her life her own. Polanski’s film seizes on Hardy’s themes that we become trapped in our own fates, events spiralling constantly to leave us ever more at the mercy of factors over which we have no control. Tess is an isolated character, with few friends and confidantes, and whom society has left behind. It’s a film that follows an individual in a monolithic society with its own rules and structures, that makes no room for personal circumstances when rushing to its judgements.

Making Tess an innocent victim meant Polanski needed to cast someone who would not bring too much overt “actor” presence. Kinski, only 16 when filming started, brings a very natural innocence and gentleness to the role. She is certainly completely believable as a young woman who cannot truly understand what all these men who take such an interest in her really want, and feels unable to impose herself (just as Kinski struggles to impose herself on the film) on her life. That Kinski is not the strongest actor in the world, and that her accent erratically drifts between Dorset and Dutch, is counterbalanced by this gentle, unprocessed innocence. It matches perfectly Polanski’s idea of Tess as a victim, trapped in a perfectly constructed world. 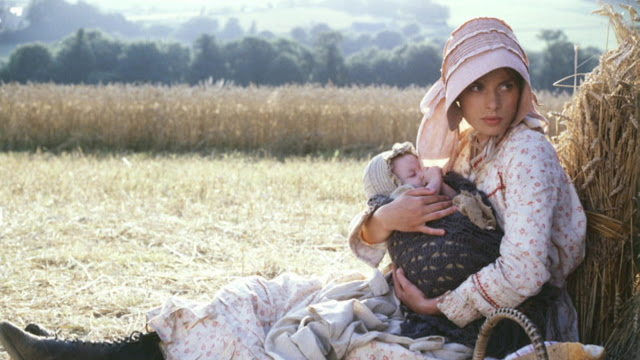 It also allows the two men in her life a bit more scope for some domineering acting. Peter Firth does a very good job as the idealistic Angel who turns out to be nowhere near as liberal or understanding as he would like to think he is, until it is way too late. Firth walks a very neat line between sanctimonious, naïve and pompous. He also makes a great contrast with Leigh Lawson’s corrupt creepiness as the pervy Alec, all moustachio-twirling charm and caddish manner, but hiding a desire beneath to be the decent, better man.

Polanski positions Tess as the constant victim pulled between these two men, from the beautifully filmed misty forest glade where Alec forces his attentions on her, to the eccentrically furnished would-be family home (complete with lascivious elderly maid, giggling about the possibilities of the couple’s wedding night) where her marriage to Angel falls apart. It’s a film where Polanski throws in many lovely touches that ground the film in a particular time and place, from that giggling maid to the ominous sound of hedge-clippers when Angel arrives at seaside hotel in search of Tess. Every moment of the film feels realistically placed in Hardy’s Wessex, and it’s crammed with small sequences and moments that stick in the mind.

It’s a film with a masterful understanding of time and place (it rightly won Oscars for cinematography, costumes and production design) but uses that to build a story of a woman made an internal victim in a society that thinks it cares, but really doesn’t. Tess is a woman whose life is buffeted and changed by the actions of others, and who cannot escape from the dark shadows of being trapped in her own destiny. You can see why these themes appealed to Polanski – and perhaps this helps explain why the film feels like such a darkly personal one, right up to its near final image of Tess as a sacrificial victim laid out at Stonehenge.
Email ThisBlogThis!Share to TwitterShare to FacebookShare to Pinterest
Labels: John Collin, Leigh Lawson, Literary adaptations, Nastassja Kinski, Peter Firth, Roman Polanski, Rosemary Martin, Suzanna Hamilton, Thomas Hardy