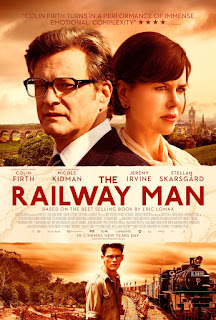 There is perhaps nothing harder to do in life than to put the past behind you and forgive. We all seem to be hot wired to want revenge and to seek it against all odds. It’s rare indeed the man who learns to put the rage against the past behind him and to extend the hand of friendship.

Such a man was Eric Lomax (played here by Colin Firth). In the 1970s Eric meets and falls in love with Patricia (Nicole Kidman). The two are married, but Patricia soon discovers Eric is still plagued by memories of his imprisonment as a young man (played by Jeremy Irvine) by the Japanese during the Second World War, and in particular a prolonged period he spent being tortured by the Japanese secret police for building a radio. Lomax is unable to begin to talk about his experiences, even as trauma causes his life to deteriorate. Fellow ex-POW Finlay (Stellan Skarsgård – very good in a small but vital role) is the only one who has even the faintest idea of his experience, but cannot persuade him to even speak about his past or try and move on. After discovering his torturer Takashi Nagase (Hiroyuki Sanada) is alive and well and working as a tourist guide in the very camp where Lomax was tortured, he travels to Japan, torn about what he should do.

Teplitzy’s film is powered by several marvellous performances, not least Colin Firth who is excellent in the lead role as the deeply repressed, tormented Lomax who in his heart has never left the prison where he suffered unbelievable torment. The film is a carefully structured, and deeply moving, character study of how atrocious and inhumane actions trap us all – both the victims and perpetrators – in patterns of suffering where we feel our own humanity drain away. Even handed, honest and generous, like Lomax’s book, it’s an engaging and moving tribute to the strength of the human spirit and our capacity for generosity.

Not least because when we finally meet the aged Nagase, he is far from the monster we expected. Like Lomax he too is haunted by the past, but where Lomax cannot escape the horrors he suffered, Nagase is plagued by guilt and disgust as he realises his actions as a young man were far from those of a righteous soldier, but rather a brainwashed pawn in a brutal army. Nagase, like Lomax, is desperate to purge himself of memories of this past, and has worked his whole life to try and make amends for the suffering he has caused. No simple good guys and bad guys here – both torturer and tortured are dehumanised, scarred and traumatised by the actions they have carried out.

Teplitzky films that torture with an unflinching honesty, that leaves you in no doubt about why it has had such impact on Lomax. Jeremy Irvine is very good as the young Lomax, scared, vulnerable but brave and self-sacrificing who puts himself in the way of danger to try and protect his friends and then goes through savage beatings, interrogations and water boarding for information he doesn’t have. It’s difficult to watch, but never sensationalised and the traumatic pointlessness of these methods is abundantly clear.

These memories, slowly revealed, are all too apparent in any case in Firth’s blasted face.  The film slowly reveals his psychological damage, with the opening sequence in fact suggesting a far lighter film ahead. The opening follows the meeting of Lomax and Patricia on a chance train journey. Playful and charming, these scenes work so well due to the wonderful chemistry between Firth and Kidman. It plays off in spadeas the plot gets darker and more disturbing. Kidman is very easy to overlook here in the “wife” role, but she invests it with an emotional honesty, a supportive woman eventually driven to the edge of her capabilities.

After the lightness of the opening, Terplitzky introduces the past literally like ghosts, with Lomax caught in a sudden delusion of himself being dragged through the hotel on his honeymoon, screaming in panic, to be carried to his torture danger. Throughout the film, the image of his torturer as a young man appears at various points (including at one point in a field as a train passes behind him), a constant reminder of how the past is here and now for Lomax.

It builds towards a sensational series of scenes as Lomax confronts Nagase, powered by two exceptional performances from Firth (barely able to control his anger, rage and pain) and a beaten down, distressed performance of shame from Hiroyuki Sanada, who matches him step for step. Sanada is superb as a man who confronts his nightmare – a man from his past – but also overwhelmed with the opportunity this gives him for amends.

That’s what the film captures so well. This tension between past and present encapsulates the universal theme of our desire for revenge and our human need to connect coming together. Lomax and Nagase had every reason to kill each other, but their reaction to seeing each other is surprising, moving and a deep tribute to the human capacity to connect and move on. Grief and the past will destroy us all if we let it. The heroic examples of both Lomax and Nagase show us this doesn’t need to be the case.
Email ThisBlogThis!Share to TwitterShare to FacebookShare to Pinterest
Labels: Biography, Colin Firth, Hiroyuki Sanada, Jeremy Irvine, Jonathan Teplitzky, Nicole Kidman, Sam Reid, Stellan Skarsgård, World War Two