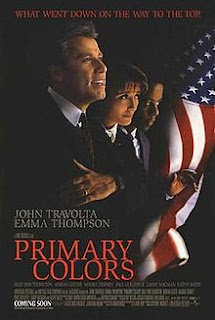 In 1998, America was engrossed in what seemed like a never-ending series of scandals around Bill Clinton, with Clinton facing impeachment. The news was filled with Clinton-Lewinsky Scandal catch-ups seemingly non-stop. Surely in the middle of that, a film that charted earlier scandals about Slick Willie would be a hit? Well Primary Colors proved that wrong. A thinly veiled portrait of the Clinton run for the White House, based on a novel written by Joe Klein who followed the Clintons on the campaign, it tanked at the box office. Possibly due to audiences having Clinton-fatigue – but also perhaps because it’s a stodgy, overlong and slightly too pleased-with-itself piece of Hollywood political commentary.

The film sticks pretty close to real-life timelines. John Travolta is Arkansas Governor Jack Stanton (Travolta does a consistent impersonation of Bill Clinton both vocally and physically during the whole film), who’s running for the Democratic Presidential nomination, supported by his (perhaps) smarter, ambitious wife Susan (Emma Thompson, doing a neat embodiment of Hillary without impersonation). Eager young black political operator Henry Burton (Adrian Lester) is recruited to help run the campaign – and finds himself increasingly drawn into the secrets of the Stantons, not least Jack’s persistent infidelities that seem to go hand-in-hand with his empathy and genuine passion for helping people. As scandal builds on scandal, the campaign to run for President becomes ever more unseemly.

Primary Colors asks questions that, to be honest, are pretty familiar to anyone who has ever seen a Hollywood film about politics. We’re presented with a Clinton-Stanton who wants to help America to re-educate itself in a modern world, who weeps with emotion when hearing a man recount his struggles with literacy (a fine cameo from Mykelti Williamson), who wants to rebuild America’s economy and build opportunities for all. And at the same time, he can’t keep it in his pants, is quite happy to dodge as much as possible the consequences of his actions, and is blithely disinterested in the impact his infidelities have on other people. Essentially the film wants to ask: at what point does a man’s personal behaviour and morals start to outweigh his good intentions?

It just takes a long time to ask it. A very long time. Primary Colors is a film that could easily be half an hour shorter, and you would miss very little. It’s a stodgy, overlong, smug drama that takes a gleeful delight in how clever it’s being making a film about the Clintons that-isn’t-about-them. It’s weakened as well by using an overly familiar device of putting a naïve and well-meaning audience surrogate character at its centre. We’ve seen this growth of disillusionment before, but Adrian Lester (in a break out role) fails to make Henry Burton a really interesting character – he’s little more than a cipher that we can project our views onto, and Lester is too reserved an actor to make him a character we can effectively invest in as a person. Instead he becomes a largely passive observer that more interesting characters revolve around.

Those characters being largely the Stantons themselves. John Travolta does a very good impersonation of Clinton, but he offers very little insight into the sort of person Clinton is, his motivations or his feelings. Like the character, the role is all performance and you never get a sense of how genuine his goals are and how much ambition is his main driver. As scandals pile up, Travolta is great at capturing Clinton’s sense of hurt that anyone would question his morals (even as his actions display his fundamental lack of them), but the role is short on depth.

Emma Thompson gets less to play with as Hillary. In fact, she disappears from the second half of the film, after an affair plotline between her and Lester was cut completely from the film (something that makes certain scenes, where actors are clearly responding to this non-existent plotline, amusing to watch). But she manages to make the role something a little more than impersonation, delivering a whipper-sharp, ambitious woman who has buried her resentments about her husband’s betrayals under a wish to achieve a higher goal.

The rest of the cast deliver decent performances, but the stand-out is Kathy Bates as a long-time Stanton friend turned political fixer, who sees her idealisation of the Stantons turn to bitter disillusionment. Bates at first seems to be delivering another of her custom-made “larger than life” roles, but as the stuff hits the fan she layers it with a real emotional depth and complexity. It’s a caricature role that she turns into something real, a woman who feels genuine pain at seeing her deeply held political convictions and ideals being slowly disregarded by her heroes.

But then we get her point. Don’t we all feel a bit like that when we think back about Bill Clinton? The more we learn about his affairs and sexual scandals – and the more that #MeToo develops our understanding of how powerful men can abuse their power to take advantage of star-struck young women – the less sympathetic he seems. The film too suffers from some really out-of-date views of male sexuality. Billy Bob Thornton’s political fixer exposes himself early on in the film to a female worker, but this is shrugged off as “banter”, as opposed to a criminal offence – and the film largely avoids giving any air time to Stanton’s principal victim, the teenage daughter of a black restauranter whom he may or may not have impregnated. Stanton casually uses his power to gain sexual favours – one of his earliest acts is casually picking up a gawky English teacher who’s giving him a guided tour of her school (a funny cameo from Allison Janney) – but this is largely categorised as a personal weakness that doesn’t impact his suitability for the Presidency, something that feels more and more uncomfortable.

However, Primary Colors’ real problem is that it is overlong and a little bit too pleased with its intricate reconstruction of semi-true events. Although there are funny lines and decent performances, the film lacks any real zip and it gives no real insight into modern politics (other than perhaps deploring the compromises politicians must make) or the Clintons themselves. Instead it settles for telling us things we already know at great length and making safe but empty points about modern America. Far from exploring a Faustian pact where we accept deep personal failings in politicians because we believe that, overall, they could be a force for good, instead Primary Colors is all about turning shades of grey into obvious clear-cut moral choices.
Email ThisBlogThis!Share to TwitterShare to FacebookShare to Pinterest
Labels: Adrian Lester, Allison Janney, Billy Bob Thornton, Diane Ladd, Emma Thompson, John Travolta, Kathy Bates, Larry Hagman, Maura Tierney, Mike Nichols, Mykelti Williamson, Political dramas, Political satire