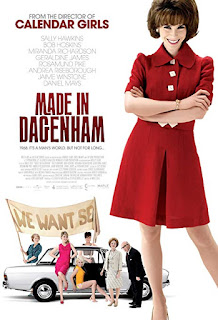 You’d like to think a film made ten years ago about a strike for equal pay in the 1960s would be more of a history piece than something that still carries real relevance today. But this is still a world where women are often paid less than a man, and where their work is often devalued or held as less “important” than their male counterparts. Made in Dagenham looks at all these issues with a rose-tinted, feel-good stance that aims to entertain first and make you think second. Nothing wrong with that, but it means the film is largely just a crowd-pleaser, when you feel it could be more.

At the Ford factory in Dagenham, the female sewing machinists are not paid as skilled workers, and are forced to accept less work. Frustrated at the patronising attitude from their all-male union reps, and encouraged by foreman Albert (Bob Hoskins, lovely in one of his cuddliest performances), the women decide to go on strike for equal play, led by Rita O’Grady (Sally Hawkins). As public attention builds, the Ford owners in America mobilise for a battle and the strike attracts the interest of Secretary for Employment Barbara Castle (Miranda Richardson), someone who knows the struggles a woman faces in a man’s world.

It’s no great surprise based on the fluffy, charming tone of this film that Nigel Cole’s previous credit was Calendar Girls. (Also no surprise that, like that film, this has been turned into a crowd-pleasing stage musical.) William Ivory’s script deftly sketches out some familiar movie-dynamics for its characters, establishes clear heroes and villains, gives us a good sprinkling of information and “things to think about”, mixes in at least one tragic sub-plot and provides a steady stream of high points, heart-string tugging moments and punch the air moments. As a piece of writing playing to the masses, it’s pretty flawless.

It’s in love with the 1960s details, with nostalgia dialled up to 11, with a love of the look, feel and styles of the era and plenty of sound cues mixed in that will have you tapping your toes. It’s all designed for you to have fun, and if that means some of the deeper questions get a bit lost at points, that doesn’t really matter.

And there is more than enough enjoyable material to be seen in setting up a series of bigoted or patronising men (gamely played principally by Kenneth Cranham and Rupert Graves) and seeing them knocked down. You could argue that a slightly braver film would touch at the implications of what Richard Schiff’s corporate big-hitter says about equal pay: make it more expensive to make cars here and we will make our cars somewhere else. (In fact it was pretty hard to forget that, watching the film today, as Brexit has already caused at least three major car factory closures in the UK. In fact the film is very happy to talk all about equal pay for women in the Western World but never even raises the question of how we are quite content to have people in the third world slave away in conditions far worse than this for a few pennies an hour.) But that’s not the film’s point, and instead it’s all about those male-female relationships.

Sally Hawkins does a good job as a woman slowly growing a social and political awareness and then turning that new-found enlightenment on her own domestic life with well-meaning but of-his-time husband Eddie (a sweet but cluelessly sexist Daniel Mays). It’s all conventional stuff, but Hawkins and Mays play it very well.

The real meat actually comes from plotlines elsewhere. Rosamund Pike is excellent as a woman with a first in history from Oxford, reduced to wheeling out nibbles for her patronising husband and keeping her ideas to herself. Geraldine James and Roger Lloyd-Pack get the tragic plotline of a couple struggling with his post-war undiagnosed PTSD, which gets most of the heart-string tugging.

Eventually all is made well by Miranda Richardson’s Barbara Castle, floating into the picture to wave a magic wand and save the women’s bacon. Richardson thoroughly enjoys herself in a rather cardboard role, at least two scenes of which are solid exposition, in which Castle’s lecturing of two uppity civil servants is used to introduce the political context. By the end you won’t be surprised that good triumphs. But it’s a film which largely only looks to put a smile on your face, and doesn’t really look at the wider implications or injustices of unequal pay. To the film’s credit it has a final montage of the real Ford women talking about their lives and the battles they had to be respected, which gives it a bit of extra depth. A truly brave film would have found a few minutes – and that’s all it really needs – to look at the wider issues (then and today) economically and socially, and to make us think a little. As it is this just entertains, which is what you want, but it could be more.
Email ThisBlogThis!Share to TwitterShare to FacebookShare to Pinterest
Labels: Andrea Riseborough, Bob Hoskins, Comedy, Daniel Mays, Geraldine James, Jamie Winstone, Miranda Richardson, Nigel Cole, Richard Schiff, Rosamund Pike, Rupert Graves, Sally Hawkins, Social issues