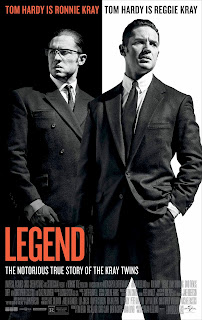 Tom Hardy is the sort of actor who, if you could find a role for him in your film, you certainly would. So how about getting the chance to cast him twice? That’s the happy situation Brian Helgeland was in here, with the chance for Hardy to play not one but both of the Kray twins. The buzz around Hardy taking on both roles was so strong that the film itself was almost completely forgotten in the crush. This was perhaps easy to do since the film is pretty mediocre at best, a confused mess that can’t decide if it wants to wallow in the undeserved glamour of the Krays or whether it wants to explore the darker currents below the surface.

The film covers most of the career of the Kray brothers – the seemingly more grounded, ambitious Reggie and then the more impulsive Ronnie, recently released from psychiatric prison. The Kray brothers balance competing demands: Ronnie is essentially happy where he is, king of a small pond, while Reggie has dreams of expanding a criminal empire across the Atlantic in partnership with the Mafia. Meanwhile, various gangland opponents and the police stalk the brothers, while Reggie’s relationship and later marriage to Frances Shea (Emily Browning) slowly collapses.

Helgeland’s film is a fairly bland piece of film-making that wants to have its cake and eat it. It wants to enjoy the criminal undertakings of the Krays, their clubland cool, charisma and charm. But it also wants to make clear that these are violent criminals who have very few moral qualms about anything they do. It’s a printing and an exploration of the legend, but the problem is that it never actually becomes particularly interesting, despite the best efforts of everyone involved. Perhaps everyone became too blinded by the pyrotechnics and undoubted skill of Hardy’s double performance that the overall film itself got a bit lost.

Hardy is superb, turning the brothers into two highly distinctive personalities who both seem like two halves of the same shattered personality, whose character traits slowly merge and even swap over the course of the film. Hardy also develops a key physicality and style for both characters that is very similar but also clearly different in both cases. So you get Ronnie, Churchill-bulldog like, with a muscular, growling heaviness that stinks of paranoia. And Reggie, smart-suited and slicked back, with a confident thrusting demeanour that falls apart over the film into a weasily fury.

Both these progressions make perfect sense, and Hardy is so skilled at playing both halves of many conversations that you forget while watching the film that you are looking at one actor playing two roles. Astonishingly – and perhaps the biggest trick he pulls – he turns this tour-de-force double role into something that feels so natural you don’t notice it happening. And the bond that ties the two brothers together into a descent into hell is so strong that even when beating the crap out of each other they still seem like two halves of one messed up personality.

Hardy is of course so brilliant, the rest of the skilled cast basically only get a few beats to sketch out various gangland figures and coppers. Excellent actors – Eccleston, Thewlis, Bettany, Anderson – are picked out to do this, but none make much of an impression. The thrust is always the strange dance of personality between the Krays, two brothers who effectively destroy each other with their actions, but are so closely bound together that the one cannot survive without the other.

It’s psychology like this that you wish the film could explore, especially as Hardy takes both brothers to dark and bitter places that makes both of them openly vile and terrifying to imagine meeting. Helgeland chooses to explore much of this – particularly Reggie’s darkness – through a rather tired voiceover led structure via Emily Browning’s Frances Shea. There is nothing wrong with Browning’s performance, but the predictable and rather traditional structure that this gives the story – not to mention the rather clumsy scripting – ends up dragging the film along.

Helgeland makes a decent job of directing this film, and it looks fine, but it is strangely underpowered and unengaging at every turn, a bland piece of gangland history that only really catches fire when both Hardys take the stage and this superstar actor lets rip. Away from him, there is a soft-focus nostalgia in its look back at the sixties, which confuses the attitude the film has towards the Krays, and a ticking off of historical events that gets in the way of creating a compelling narrative.