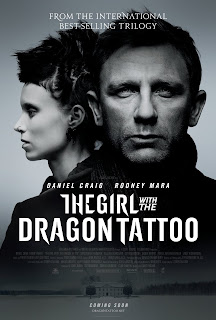 At the time of its release, there was a slightly cool reaction to David Fincher’s The Girl with the Dragon Tattoo. Most reviewers were already familiar with the story twice over, firstly as the best-selling thriller then as the Swedish film starring Noomi Rapace. Perhaps fans were similarly slightly indifferent, while newbies had already declined the first two options, as the film struggled to crawl its way to breakeven. However, rewatching it, I feel this intriguingly well-made film deserves to be mentioned in the same discussion as another adaptation of a pulp thriller made 20 years earlier: The Silence of the Lambs.

Mikael Blomqvist (Daniel Craig) is a crusading financial journalist and co-owner of Millennium magazine, whose career is in ruins after his article about the CEO of a major company leads to him losing a costly legal battle for libel. He is approached by retired businessman Henrik Vanger (Christopher Plummer), who asks him to investigate the 40-year-old disappearance of his niece Harriet Vanger, who vanished on their privately owned island estate. Blomqvist is hired after an exhaustive investigation into his personal life by emotionally challenged hacker and private investigator Lisbeth Slander (Rooney Mara), who is facing her own problems of gaining her independence from her position as a ward of the state, represented by her vile guardian Nils Bjurman (Yorick van Wageningen). As Blomqvist investigates, eventually with the help of Lisbeth, the trail takes a very dark turn suggesting a sinister hand behind the disappearance not only of Harriet but also of a number of other women around Sweden.

Fincher’s crisply made, icily cold movie embraces the coldness not only of wintery Sweden, but also the film’s chilling subject matter. There are very rarely – if ever – flashes of colour or light, with the world taking on an oppressive blackness and grey or windswept bleakness. It’s a perfect metaphor for the horror of what people do to each other. It’s brilliantly assembled, as you would expect from Fincher, and made with such consummate skill and excellence that its professional chill becomes almost oppressively unsettling, much like the plot itself.

Re-watching it I was put very much in mind of The Silence of the Lambs. That too was a masterfully made adaptation of a pulp novel that found a poetry and depth in the book, framing it around a series of unconventional relationships, with a female lead pushed into a role that sharply defies expectations. Both have at their centre a dangerous figure whose interests align with the other characters. Brilliantly, here the role of dangerously unpredictable genius and unexpected female role are both taken by Lisbeth Slander. (In fact Lisbeth is like a fusing of Clarice and Lector into one character).

Like Lambs, which tapped into the 1990s obsession with the power of psychiatry and self-analysis and used it as the key to uncovering and defeating criminals, this takes our fascination with computers and the internet and uses that as silver bullet for finding criminals. Just as in the 1990s psychiatrists seemed to have access to some sort of mystical alchemy no one else could understand, so the film shows Lisbeth’s hacker skills as some sort of super power that can blow down secrets and accomplish things no one else can do.

The film also echoes Lambs in its fascinating look at the place of women in the world. The film revolves around historical violence against women – when we finally have the killer unveiled he confirms women have only ever been his targets – and the film is heavy (in often wordlessly narrated flashbacks) with ominous feelings of danger from a domineering male culture. The world clearly hasn’t changed that much either. The killer continues to operate, everyone in a position of influence we see is an ageing man, Lisbeth’s ward is a vile sexual abuser. But, in this milieu of threat to women, Lisbeth becomes a sort of icon of a woman living life on her terms and taking control of her own life.

Impressively embodied by an Oscar-nominated Rooney Mara, Lisbeth is the sort of character you would normally expect to be a man: surly, anti-social, difficult, prone to violence, sexually indiscriminate, determined to always be in control and decisive in her relationships. She quickly takes the lead in her relationship with Mikael, professionally and later sexually (right down to her telling him where to put his hands during their passionate but also functional sex scenes). Mikael meanwhile takes far more the traditional “female” role: dedicated, hard-working, maternal, competent but better placed as the assistant to a true genius. Daniel Craig gives him a slightly rumpled middle-age quality, combined with a feckless recklessness that lands him in trouble.

The film is Lisbeth’s though, and Fincher brilliantly uses early scenes to establish her defiant, independent character. From snatching her bag back (brutally) from a would-be mugger on the underground, to a surly, blunt lack of respect she shows to a client, she’s painted clearly as a person who will respond how she wants, regardless of any “rules”. But Fincher also makes time to show her vulnerability. Lonely and insecure, she has worked hard to kill any vulnerability in her and protect herself from emotional pain. To see the small notes of tenderness she allows out – from her reaction to a former guardian suffering a stroke to her increasing emotional investment in Mikael – is strikingly engaging.

And we definitely see her suffering. If we had any doubts about one of the themes of this film being about how powerful men abuse and control women, the sub-plot of Lisbeth’s abusive warden (played with the pathetic, creepy relish of the small man enjoying what control he has by Yorick van Wageningen) hammers it home. The four key scenes between these characters cover a mini-arc in themselves from abuse of power, assault, revenge and power shift. Lisbeth may suffer terribly – more than she expects, much to her shock – but the sequence not only shows her ability to survive but also to turn the tables to her advantage. You could argue that this sort of rape-revenge fantasy might trivialise the impact rape has on real people – but it’s crucial for the theme of the film that there is hope that the sort of scum that abuse their positions can be stopped and that victims can survive and thrive.

And you’ll need this as the film expands both into the past and the present day into a series of increasingly grim cases of historical abuse and murder. Fincher presents all this with the same brilliant, non-exploitative control that Jonathan Demme managed in Lambs. Despite the horrors of the themes, there is no lingering on anything graphic. Instead Fincher uses the tension of slowness, of steady camera work, of careful pacing to let tension and unease build up as we feel something is horribly wrong but never can be quite sure what. The final confrontation with the killer is not only deeply unsettling for it being one of the most brightly lit sequences of the film, but also for the middle-class banality of the villain’s taste (you’ll never listen to Orinoco Flow in the same way again) and the fascinatingly business-like approach he brings to his deeds of slaughter.

The Girl with the Dragan Tattoo is such a well-made film that perhaps that’s its greatest weakness. It’s a little too easy to see a lack of personality in it, a professionalism, a clean perfection, a master craftsman quality, that you feel you are watching a studio picture made by a great director. And maybe you are: but then you could say the same about many of Hitchcock’s film, a director Fincher consciously echoes here. Superbly acted not just by the leads but by the whole cast (Plummer, Skarsgård and Wright are excellent while even Berkoff gives a restrained performance) The Girl with the Dragon Tattoo is the sort of film that will surely only be considered in a warmer and warmer light as time goes by.
Email ThisBlogThis!Share to TwitterShare to FacebookShare to Pinterest
Labels: Christopher Plummer, Daniel Craig, David Fincher, Embeth Davidtz, Geraldine James, Goran Višnjić, Joely Richardson, Murder mystery, Robin Wright, Rooney Mara, Stellan Skarsgård, Steven Berkoff, Thrillers