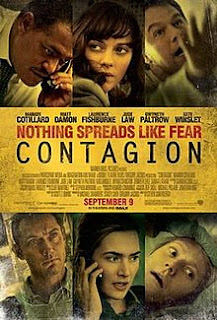 It’s a fear that has gripped the world several times this century: the pandemic that will wipe us all out. It’s the theme of Steven Soderbergh’s impressively mounted epidemic drama, which mixes in an astute commentary on how the modern world is likely to respond to an event that could herald the end of times.

Beth Emhoff (Gwyneth Paltrow) is a businesswoman flying back to Minneapolis from Hong Kong (with a stopover in Chicago for a bit of rumpy-pumpy with an ex-boyfriend) who becomes Patient Zero for an outbreak of a virulent strain of swine and bat flu that proves near fatal for the immune system. While her stunned husband Mitch (Matt Damon) is immune, most of the population aren’t. Across the world, health organisations swing to action – from Dr Ellis Cheever (Laurence Fishburne) and Dr Ally Hextall (Jennifer Ehle) at the CDC, to Dr Erin Mears (Kate Winslet) running things on the ground in Minneapolis to Dr Leonara Orantes (Marion Cotillard) investigating for the WHO in Switzerland and Hong Kong. As populations panic, conspiracy-theorist blogger Alan Krumwiede (Jude Law) sees this as an opportunity for personal promotion and enrichment.

Soderbergh’s clinical filming approach makes for a chillingly realistic piece of cinema realitie, possibly one of the director’s finest films in his oddly-uneven career. Soderbergh presents events as they are, laying out the film like a giant Pandemic board. Captions regularly tell us what day we are on from initial outbreak, as well as the populations of the various cities the plot lands us in. The film is shot with a documentary lack of fussiness, and largely avoids either sensationalism or the sort of Hollywood virus clichés of films like Outbreak. It also succeeds in largely avoiding heroes or villains (even the usual baddies for this sort of film, Big Phama companies, are shown as part of a potential solution not the problem) – even the outbreak is largely an act of chance, prompted by mankind’s actions, but there is no reveal that shady suits or military types are behind it all.

Watching the film today in the light of Brexit and Trump it actually appears strikingly profound and prescient in its depiction of the knee-jerk paranoia and wilful blindness of internet and media pundits who believe every opinion is equal and valid regardless of expertise. Alan Krumwiede (a slightly pantomime performance from Jude Law, complete with bad hair, bad teeth and an Aussie accent perhaps intended to echo Julian Assange) all but denounces the views of experts as “fake news”, claims his opinions on the causes and treatment of the disease are as valid as the expert professionals (all but saying “I think we have had enough of so-called experts”), uses his unique hit count as evidence for the validity of his (bogus) conspiracy theories and makes a fortune peddling a snake-oil natural cure which he claims saved his life (and leads to millions of people ignoring the proper precautions and treatments recommended by the WHO and CDC). 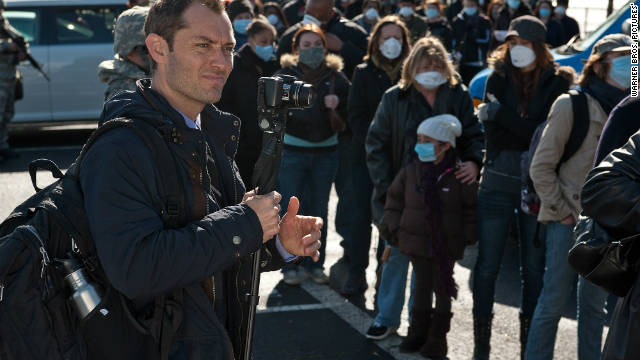 Soderbergh shows that this sort of crap is as much a dangerous pandemic as the disease itself, encouraging an atmosphere of fear and hostility. At the time it just seemed a bit snide to say “a blog is not writing, it’s graffiti with punctuation”, but today, as websites spout up presenting all sorts of horseshit as legitimate fact, this film looks more and more ahead of the curve in its analysis of a public disillusioned and untrusting of authorities can turn their attention and trust to a venal liar who claims to be a tribune of the people, but is interested only in lining his own pocket.

But then that’s one of this film’s interesting psychological points. If there is an antagonist in this film, it’s human nature itself. The “wisdom of crowds” is continuously a dangerous thing, as areas devolve into rioting and looting. The bureaucracy of local and international governments causes as many problems as the disease: even as bodies pile up in Minneapolis, Kate Winslet’s on-site CDC crisis manager must bat away furious lackeys of the State Governor, demanding to know if the federal government will cover the extra medical precautions. Announcements of public danger are pushed back until after Thanksgiving, so as not to have a negative impact on the holiday. The decent Dr Cheever, who unwisely leaks news of a lockdown of Chicago to his fiancée, is thrown to the dogs by the government who need some sort of scapegoat they can blame the whole mess on.

If our enemies are red tape and the selfish rumour-mongering of the unqualified and the self-important, acts of heroism here are generally rogue moments of rule-benders. A scientist at a private pharmaceutical company continues his work after being ordered to destroy his samples (and then shares his crucial findings about the disease with the world, free of charge). CDC scientist Ally Hextall tests a crucial antibody on herself because there simply isn’t time to go through the lengthy trials needed (needless to say Krumwiede uses this as further evidence that the outbreak is a government stitch-up).

Alongside all this, Soderbergh’s detailed direction and editing chillingly chart the spread of the disease. Having explained carefully how it can be spread by touch, the camera details every move of infected people, carefully lingering for half a second on every touched item, with the implication clear that everyone else who will touch these objects soon (such as door handles) will themselves become infected. The film pulls no punches in showing the grim effects of the disease (poor Gwyneth Paltrow!) and the resulting chaos as the pandemic progresses, with social structure breaking down, chaos only held in check by mobilising army forces and imposing curfews and a national lottery for cure distribution, with areas off-limits for those not carrying a wristband barcode identifying them as inoculated.

Soderbergh assembles a fine cast for this drama, helping to put human faces to characters who often have to spout reams of scientific and medicinal dialogue. Fishburne is particularly good as a noble and reasonable head of the CDC, who succumbs only once to putting his loved ones first. Matt Damon is the face of “regular joes” as a father going to any lengths to protect his last surviving child. As one reviewer said the “undercard” of the cast is particularly strong, with Jennifer Ehle perhaps the outstanding performer as the eccentrically driven CDC research scientist. Cranston, Gould, Han, Hawkes and Colantoni are also equally fine.

Soderbergh’s film was a bit overlooked at the time, but rewatching it again, the more I think it might be strikingly intelligent analysis of our modern world, ahead of its time in understanding how new media and human nature can interact with government and society, and how this can lead to a spiralling in times of crisis. One of his best.
Email ThisBlogThis!Share to TwitterShare to FacebookShare to Pinterest
Labels: Bryan Cranston, Chin Han, Elliott Gould, Enrico Colantoni, Gwyneth Paltrow, Jennifer Ehle, John Hawkes, Jude Law, Kate Winslet, Laurence Fishburne, Marion Cotillard, Matt Damon, Social issues, Steven Soderbergh