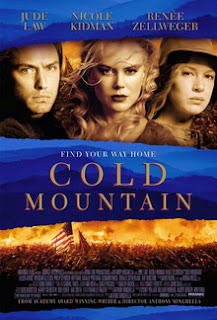 There was no difficult novel Anthony Minghella couldn’t adapt for the big screen. Cold Mountain is as beautiful and handsome a film as any he made, and his masterful scripting of a complex story is testament to his skill. So why is Cold Mountain not more loved? Is it because it’s almost too well made, too handsomely mounted, too literary and intelligent? Is it, actually, trying a little too hard? Is it a Cold Mountain itself, a giant structure of beauty but with an icy heart?

Based on Charles Frazier’s novel, set in the final days of the American Civil War, confederate soldier Inman (Jude Law), knowing the war is lost, deserts to return to the woman he loves, Ada Monroe (Nicole Kidman). The two of them have only spoken a few times but they feel a deep personal bond. During the years of war, poverty has hit preacher’s daughter Ada, although she has crafted a life-changing friendship with 18th century trailer trash Ruby Thewes (Renée Zellweger) which has helped her survive. As Inman’s odyssey home leads to him encountering a number of different vignettes that show the despair Civil War has brought to America, Ada struggles to survive and avoid the sinister attentions of home guard enforcer Teague (Ray Winstone).

There is so much to admire in Cold Mountain I want to start there. The photography is beautiful, and the film is assembled with a striking grace and skill. Walter Murch’s editing and sound design is perfect, with each shot of the film being fabulously composed and each carrying a specific message and purpose that contributes to the overall impact. The use of music – a collaboration between T Bone Burnett and Gabriel Yared – is perfect, a series of wonderful period compositions and impactful orchestral pieces.

Everything about how Minghella captures the feel of the time, the mood of the South heading into war, and the disintegration of social conventions as the war takes hold and lays waste to the land, rings completely true. From the celebrations of the young men at the film’s start, to the increasingly haunted, tragic look of Jude Law’s Inman as he discovers new horrors at every point in his journey, you know war is hell. Minghella ironically opens the film with a catastrophic defeat for the North – but the slaughter disgusts Inman, and his burial under mounds of rubble during an explosion leads to a spiritual rebirths with Inman deciding senseless killing isn’t worth the candle any more. In a war of willing volunteers, how do we respond when these volunteers don’t want to keep fighting?

And why should they, as each of the various vignettes Inman walks through is a wasteland of moral collapse? From a sex-obsessed preacher (an amusing performance by Philip Seymour Hoffman) who has lost his morals to a tragic widow desperately trying to feed her baby (Natalie Portman, effectively stealing the whole show with an intense performance of utter desolation), everything Inman sees shows that nothing is worth all this. The film gets a very good sense of the drive that pushes Inman forward: constantly moving, he’s rarely seen sitting or resting. Each of the Odyssey-inspired stories gives him something to reflect on, or another opportunity for moral and emotional torment , from dragging bodies in a chain gang to avoiding the lustful advances of a group of hillbilly sirens who trap deserters for money.

Meanwhile, things ain’t much better on the homefront, where corrupt bullies like Teague (a slightly too obvious Ray Winstone) are enforcing their own law at the expense of justice. Poverty is also the impact of war, and poor Ada suffers hugely from this, as supplies run low and eventually out. Minghella’s swift and skilful establishment of character shows from the start how Ada is a stranger in a strange land, a middle-class town girl who is completely unsuited for country life and utterly unready to fend for herself when the chips are down without support.

Is it any wonder in this world, that Inman and Ada cling to memories? Part of the film’s effect depends on how you respond to the romantic bond between these two clinging to a few brief moments (a few exchanges and one immensely passionate kiss on the day of Inman’s departure). It’s an old-fashioned, sweeping, love story and it depends on you relating to that old-fashioned mythic love story. I’m not sure that the film quite sells this as effectively as it could do. Somehow, perhaps because Inman is so insular and Ada a little too difficult to relate to, the passion between them can’t quite carry the sweep that the film demands, even as Minghella skilfully intercuts between them.

Nicole Kidman in particular feels miscast as Ada. Kidman is too intelligent, too determined and strong a performer to convince as a woman who is unable to look after herself and nearly succumbs to fear – she’s just not an actress I can picture cowering in fear in front of an angry rooster. Kidman does her best, but the character never really wins the sympathy that we need for the performance to work. Jude Law has much more to work with as Inman, brilliantly communication a whole world of feeling with very little dialogue. 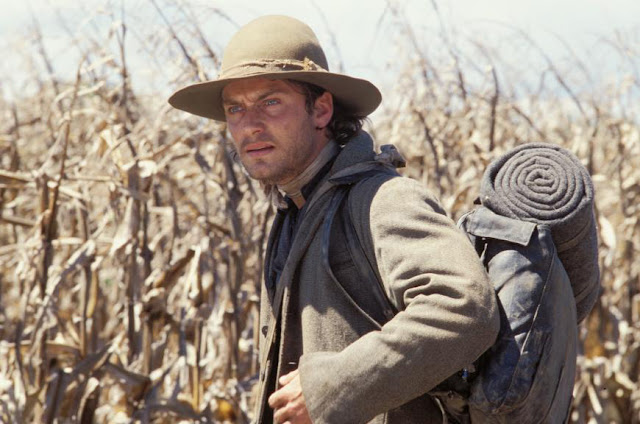 What works less well with Law is that his plotline just doesn’t quite grip enough. The vignettes are often entertaining, but feel like episodic sketches, and the sense of a building picture of the despair of the South doesn’t quite come into shape as much in practice as it does in theory. Frankly, after a while, you are ready for Inman’s journey to come to an end and for him to intersect with Ada’s plotline back at Cold Mountain (which is built around a consistent group of characters who engage our interest).

In the home front storyline you’ll be relieved with the entrance (almost an hour into the film) of Renée Zellweger’s blowsy Ruby, a loud-mouthed, trailer-trash woman with a heart of gold and a mastery of farming who effectively saves Ada’s life. It’s a loud, big, Oscar-winning performance from Zellweger that plays with being a little broad, but is skilfully balanced by the slow reveal that this personality is a cover that Ruby uses to hide her own pain. Added to this depth, her heart-warming presence carries such simple pleasure and colour compared to the more muted performances from the leads that you welcome it.

Because Inman and Ada don’t quite work as a romantic couple. There is something slightly cold about them, slightly hard to relate to. And for all the intense and brilliant construction and filming of the film – and the mastery of Minghella’s writing and direction – it never makes them into the sort of classic romantic couple you care for. You want to connect with it more than you ever really do, and whether that is down to miscasting or the lack of intense chemistry between them I’m not sure, but it means Cold Mountain never becomes the great romantic tragedy it should be. You want a film this good to be as good as it feels – and it never quite is.
Email ThisBlogThis!Share to TwitterShare to FacebookShare to Pinterest
Labels: American Civil War, Anthony Minghella, Charlie Hunnam, Cillian Murphy, Donald Sutherland, Eileen Atkins, Giovani Ribisi, Jude Law, Kathy Baker, Natalie Portman, Nicole Kidman, Ray Winstone, Renée Zellweger