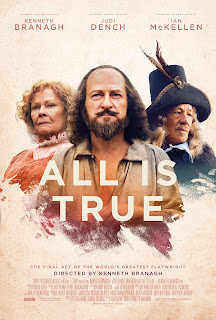 There are few actors alive associated as much with Shakespeare as Kenneth Branagh. So it was probably only a matter of time before he played the man himself. Returning to smaller, more intimate projects after some colossal Hollywood epics, Branagh’s film is a beautifully shot, gentle and elegiac drama about loss and family life.

After the burning down of the Globe Theatre in June 1613 during a production of Shakespeare’s final play Henry VIII (otherwise known as All is True), William Shakespeare (Kenneth Branagh) returns home to Stratford-upon-Avon. There he must confront long-existing tensions with his wife Anne (Judi Dench) and daughters Judith (Kathryn Wilder) and Susannah (Lydia Wilson), and face the raw grief of the loss of his son Hamnet 18 years ago.
The script is intelligent and well thought out by Ben Elton, weaving a bit of fiction and sensitive theorising between the lines of what we know about Shakespeare’s final days. It makes for something that I will admit is not always awash with pace or events, but does have a quiet, magnetic emotional force that eventually casts a sort of spell.

It’s a film that gently explores the dynamics and tensions of family, and the all-pervading power of grief and how it can colour the relations between those left behind. Made worse of course by the patriarch of this family having effectively lived on another planet for the last 30 years, coming back so rarely from London that he now hardly knows the people he left behind (a sense of isolation that several skilful shots at the start establish). Especially when that patriarch is a genius, who is out of place and uncertain about where he lies in relation to the family. Nearing the end of his career, Shakespeare wants to know what it has been for and who will inherit whatever legacy he has left.

And that is particularly complex in the sense that he has no son to continue the family name, and no-one in his family (most of whom are illiterate) who can continue his artistic legacy. In death, young Hamnet has been sanctified by Shakespeare, made into a young proto-genius, a perfect son who was has set to continue his legacy. It’s blinded him to the qualities or depths of his other children, and powered an obsession in many of his later works with the loss of children. While the rest of the family have learned to set Hamnet aside, Shakespeare still mourns him as if he died yesterday – griefs that seem as tied in with the lack of future he sees ahead for his heirless family.

So we get a series of heart-felt and universal vignettes as Shakespeare channels his loss into building a garden for Hamnet, and is eventually forced into confronting deep-rooted truths about himself and his family. The film is punctuated with his speaking to the ghost of his lost son, but he seems as unable to understand him still as he is to understand his family. His conversations with them are based around lost memories, faded past and a total inability to see the people they have become. He seems equally lost in the petty dynamics of the town, so alien to him from the larger concerns of London.

Much of this works so well as the film is so beautifully played by an exceptionally assembled cast. Branagh leads the film superbly with a restrained, quiet, contemplative performance with elements of comedy in among the sensitive touches. The make-up job takes a few beats to get used to, but once you are past that, the film focuses in on “the truth” below the surface with Shakespeare. Branagh gives Shakespeare a rich, sad inner life, a life that faces two traumas – the loss of the theatre he built, leading on to finally confronting the truths behind the loss of his son and the damage it has caused his family. Proud, intelligent, sensitive but also blind to so much, Branagh’s Shakespeare is an exquisite performance of great intellect, married to very everyday concerns.

It’s a balance that is explored in one of the film’s finest scenes, in which Shakespeare meets with the Earl of Southampton, played with scene-stealing charisma by Ian McKellen. Southampton for his part questions the Bard’s obsession with such middle-class concerns as status and money (from his comfortable position of being loaded) and clearly understands the greatness of Shakespeare in the way no one else really can. Shakespeare can’t feel in the same way that he has led a small life, and the film clearly addresses head-on his own sexual attraction to Southampton, present from the start in his giddy excitement at the Earl’s arrival. Southampton, aged, seems surprised and almost touched by Shakespeare’s continued love – gently turning him down. It’s part of the complex interior world that film explores around the poet – a man obsessed with social position and concerns of others, who was still willing to express his love for another man.

The film draws superb performances from the rest of the cast as well, with Judi Dench extremely good as the sensible, dedicated, long-suffering Anne. Kathryn Wilder is superb as Shakespeare’s overlooked daughter Judith with Lydia Wilson also fine as the more conventional Susannah. The rest of the cast are equally strong.

The film is beautifully shot, with the interiors lit with candles and the outside shots showing a marvellous inspiration from paintings that mount the film with a handsome beauty. While the film is not always blessed with pace, and has a feel at time of a sort of heritage-laced Bergman film, it carries without a certain emotional force that really ends up delivering a tender picture of difficult family dynamics and a man who has spent his life telling stories beginning to understand the story of his own life. Directed with a real measured passion from Branagh, and very well acted, there is a richness and depth to this that makes it one of Branagh’s finest films.
Email ThisBlogThis!Share to TwitterShare to FacebookShare to Pinterest
Labels: Biography, Ian McKellen, Judi Dench, Kathryn Wilder, Kenneth Branagh, Lydia Wilson, Shakespeare