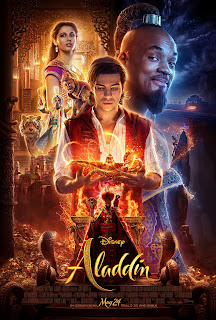 Disney’s passion for converting their vast animation back catalogue into life-action cash registers continues with Aladdin. And it won’t stop after this film blockbustered its way to a huge international cash haul. Why did it do so well? Probably because it reassuringly offers you exactly the same film as the animated original, bar a few extra sub plots to beef up the runtime. I mean this. This is the same film almost completely as the first one, but without Robin Williams. Which is a bit like saying it’s a Shakespeare remake without the language.

Anyway, everyone knows the story. Evil Jafar (Marwan Kenzari) wants the powerful lamp, it’s trapped in the Cave of Wonders and only “a diamond in the rough” can get it out. Aladdin (Mena Massoud) is that diamond, and wouldn’t you know he’s in prison after sneaking into the palace to meet Princess Jasmine (Naomi Scott) with whom he has unknowingly fallen in love during her visit incognito onto the streets of Agrabah. Aladdin gets the lamp, but events mean he’s the guy who rubs it and gets the three wishes (and the friendship) of the Genie (Will Smith, using every inch of his personality to replace Robin Williams).

Do people only see these films because they know exactly what they are going to get? Do the directors only make these films under tight instruction to deviate as little as possible from the animated original? What is there creatively in this sort of karaoke, where the biggest praise seems to be “it’s just like the cartoon”? I mean why not just watch the cartoon? As is invariably the case, it’s got far more wit, invention and energy. And it’s half an hour shorter.
This is one of the biggest photocopies I think they’ve done so far. I sat in the cinema genuinely puzzled and dumbfounded as to why this film exists. For much of the first hour, all the lines, the beats, the songs, some of the shots, much of the physical business – it was all the same. All of it.

It does have some new bits and pieces. Jasmine has been given a decent plotline about her dream of becoming the new Sultan being constantly restricted by her father not being able to imagine a girl ruling (she even gets a couple of new songs, which are decent in themselves but so tonally different to the rest of the film they feel crow-barred in). Jasmine also has a new handmaid who can serve as a love interest of the Genie. Iago the parrot has much of his scheming moved over to Jafar (who is made an expert pickpocket), while the film walks a confusing line between making Iago more sentient than a normal parrot, but less so than a human being. The ending has been tweaked into a chase around the streets of Agrabah to grab the lamp. But otherwise it’s basically all the same.

Guy Ritchie stamps no personality on it at all, but then that’s not what he’s been hired for. Instead he mounts the whole thing with a brash Broadway confidence. In fact that’s what the whole film feels like, a massive Broadway extravaganza that plays off the nostalgia felt towards the original by parents of the kids seeing this film. Perhaps that’s why so much is shot-for-shot the same, but at least I guess you can commend his attention to detail.
Casting wise, Naomi Scott is good as Jasmine (given by far and away the most new stuff to do compared to anyone else) and Mena Massoud does a decent job as Aladdin, although the character is as much of a bland pretty boy as he was in the original. Nasim Pedred has some very entertaining moments as the handmaid who attracts the Genie’s eye and supplies some good additional comic relief.

The real thing you want to know though is whether Will Smith is any good as the Genie. The part has been remixed for Will Smith’s skills and style as an actor (the songs have a notable different beat to them), and Smith plays it with a sense of comfy street cool, the fresh prince of the lamp. He does his absolute best here, and his charm and comic timing work as well as ever. But you watch him carefully recreate moments from the original that were flashes of Robin Williams improvisational brilliance, and your heart sinks. He never escapes from the shadow of that master of improvisation. And little moments here and there don’t stop you thinking “I bet if they could have digitally recreated Robin Williams they would have put him in here as well”.

That’s the whole film though. Never quite enough to justify its existence. Its big, it’s pretty, it’s got some lovely song and dance bits in it, it’s all jolly good fun, there is nothing wrong with it – but it’s never, ever, ever anything more than a straight remake of a tighter, funnier, smarter film. Why does it exist? To make Disney money. And on that score it’s a huge success. And it means this is never, ever, ever going to stop.
Email ThisBlogThis!Share to TwitterShare to FacebookShare to Pinterest
Labels: Alan Tudyk, Billy Magnussen, Disney, Marwan Kenzari, Mena Massoud, Naomi Scott, Navid Negahban, Remakes, Will Smith