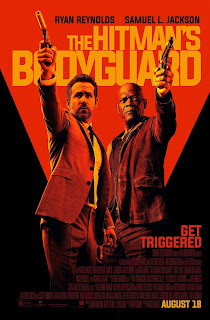 The buddy movie. Two mismatched people from two very different walks of life – ideally opposing ones – are thrown together to do something or, better yet, go somewhere and along the way (guess what!) they slowly put all their initial hostility behind each other and found out that, hey, perhaps they have more in common than they thought becoming mismatched pals for life. I’d love to say The Hitman’s Bodyguard does something different. But no, it doubles down on this plot. And doubles down hard.

Michael Bryce (Ryan Reynolds) is an elite UK-based private bodyguard – but after the sudden assassination of one of his clients (and if you can’t guess who the assassin turns out to be, you’ve clearly never seen a movie) his career falls apart and he ends up guarding drug fuelled corporate executives in London (a frankly demeaning cameo for Richard E Grant). All this changes when he is brought in – of course! – by his ex-Girlfriend Amelia (Elodie Yung), an Interpol agent charged with delivering to the Hague notorious hitman Darius Kincaid (Samuel L Jackson). Turns out Kincaid has agreed to testify against Slobodan-Milosevic-style-dictator Vladislav Dukhovich (Gary Oldman, clearly using his recent Oscar to pick up a big pay cheque). But Dukhovich’s men are out to stop them, helped by turncoats in Interpol, so Bryce and Kincaid must hit the road together to get to the Hague – not helped by their obvious loathing for each other. Let the sparks fly!

If you didn’t notice just from that plot description that this is as familiar and overworn a plot as a moth eaten old coat, let me confirm for you. This film does literally nothing new, original, different and interesting than a hundred films before it. In fact it’s almost a work of art to make something so completely and utterly lacking in any form of originality. The entire film plays out, almost beat for beat, as a straight knock off of Midnight Run, but lacking its charm, comic chops, absurdity and heart.

Instead The Hitman’s Bodyguard is exactly the sort of film actors take on when they have a bit of a loose end and want to pick up a healthy cheque so that they can consider popping off afterwards to do something a little more interesting. To say the actors could play these roles standing on their head is an understatement: they could play them in a coma.

Reynolds is charming as always, but the part barely stretches him. Jackson sprays swear words around like confetti, essentially playing his public personae and looks like a man shooting a film in between trips to The Belfry for a few rounds of golf. Salma Hayek plays a sweary, sexualised “bad girl”, in a role that I think she is embracing as a lark but in fact feels demeaning as the camera leers over her body as she does bad ass things (the part also lacks any charm whatsoever). As mentioned, surely the only thing that attracted Gary Oldman to this totally bland villain role was a stonking pay cheque – and who can blame him for that.

I suppose it passes the time okay, but the film frequently mistakes vast amounts of swearing and moments of violence for actual wit. Just hearing characters drop f-bombs and shout isn’t actually in itself that funny. There is nothing actually smart about the film at any point what-so-ever. No wonder the actors coast through it effectively playing versions of their own public personaes.

The story line is so rammed full of ludicrous events and thumping clichés that, despite the enjoyment of a few bits of pieces, you can pretty much predict everything that will happen in the movie. If you can’t spot the second the Interpol characters appear on screen which of these guys is a mole for the baddies, then you’ve clearly never seen a movie. Every single beat and every single scene that this mismatched duo go through to get from enemies to frenemies is like reading a B-movie plot creation text book.

But then if you’ve never seen a film before this might all seem rather enjoyable. If you are thinking about watching this film, I’d urge you to watch Midnight Run. It’s like this – it’s exactly like this – but much, much better. But then I guess the stars of this film will say the same. Even as they limber up to make a sequel: but then they’ve got bills to pay.
Email ThisBlogThis!Share to TwitterShare to FacebookShare to Pinterest
Labels: Comedy, Elodie Yung, Gary Oldman, Patrick Hughes, Richard E. Grant, Ryan Reynolds, Salma Hayek, Samuel L. Jackson, Spy thrillers