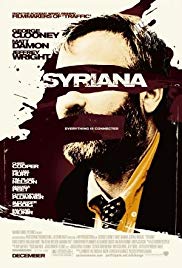 The more I think about Syriana the more I think Stephen Gaghan was unlucky. If he had made this story today, you can be sure this would have become a ten episode series on HBO or Netflix. Instead, Gaghan made it into a film in the early 2000s. This means the bloated, over expanded plot gets crammed into two short hours at the cost of much of the emotional and political complexity it needs. Without this Syriana is an angry lecture, something that throws some interesting observations at the viewer, but basically resorts more often to shouting at them about how shit the world is. With its interlinking storylines and “serious” content it looks like intelligent filmmaking, but it’s more like a misguided opportunity.

Gaghan’s film follows four plotlines. Bob Barnes (George Clooney) is a CIA field agent, and expert on the Middle East, coming to end of his effectiveness as a field agent, struggling to get his superiors in Washington to understand the complexities of Middle Eastern oil politics. He is ordered to arrange the assassination of the eldest son of the Emir of a Persian Oil Kingdom Prince Nasir Al-Subaai (Alexander Siddig). Nasir is suspected of the States of harbouring terrorist sympathies. In fact he is a passionate reformer, desperate to modernise his country. Nasir is working with Bryan Woodman (Matt Damon) a representative of an American energy company, whose son is tragically killed by an electrical fault at one of the Emir’s estates during a business trip. The Kingdom is also being courted by a newly merged US oil company Connex-Killen for exclusive drilling rights – with attorney Bennett Holiday (Jeffrey Wright) tasked to ensure that nothing stands in the way of the merger and the riches that will follow. As these three storylines of political and economic oil matters interweave, migrant oil worker Wasim (Mazhar Munir) struggles to find work in the kingdom, and is slowly wooed by extremists.

Gaghan directs his own script and that might be his first mistake, as he is not a confident or imaginative enough director to craft something truly dramatic and engaging out of this highly researched, technical script. Instead, the script – or rather the research behind the script – drives events at every turn and leads to scenes that feel like they should be intelligent but tend to be actors reciting reams of dialogue and stats at each other. Combined with that, the film has a slightly smug preachy tone to it, desperate to let us know how shady and corrupt the world is and how trapped we are on a continual downward spiral of greed and corruption preventing us from improving and changing the world. It doesn’t always make for compelling viewing.

On top of that the complexity of the narrative is often mistaken for smartness, but often feels rather more like rushed and sudden execution of a story that doesn’t really have time to breath. Frankly the story that Gaghan wants to tell needed 8-10 hours of screen time and he doesn’t get it. Instead he throws everything and the kitchen sink into this sprawling study of oil based corruption. From Washington, to private oil firms, to intelligence agencies, to the cash rich families sitting on top of these oil geysers everyone gets a kicking as part of the same sordid mess that has led to the world being dominated by the rich and the regular guys of the middle east being left adrift and easy picking for extremists.

It feels like it should carry real weight, but it never really does because it’s hard for us to get a handle on what is going on half the time and even less harder to care once you realise the film has sacrificed character and motivation for the drive of putting together its polemical view of the world. The film is stuffed with actors, but its striking how few of the characters they play make an impression. Every part is played by a star – except of course for the inexplicable casting of jobbing 1980s Brit TV actor Nicky Henson as an arrogant oil exec, a casting so outlandishly out of place for an actor you are more likely to see in One Foot in the Grave that I kind of love the film for it – but none of the roles is really much more than a cipher.

That’s not to say there isn’t decent work. Christopher Plummer brings great heft and menace to a law firm Washington bigwig. Jeffrey Wright nailed so well playing this sort of on-the-surface meek functionary who quietly learns (albeit reluctantly) to play the game as well as the loudmouths that he has played the same role several times afterwards. Alexander Siddig owes much of his post DS9 career to his exceptional thoughtful and sympathetic performance as an Arab Prince whose forward-thinking is a disaster for the governments who want to keep using his state as an ATM.

George Clooney won a generous Oscar (it was surely partly a compensation for not winning anything for Good Night, and Good Luck that year) but gets the meatiest role as Bob Barnes, the tired and cynical CIA agent who slowly begins to question the orders he is given and the world he has been working to build for his masters. His story contains the most actual drama, possibly why it stands out – poor George gets a rough ride here, tortured, arrested, bruised and blooded. It’s pretty straight forward stuff for an actor of his quality (Clooney plays it with a world weary outrage) but it’s also the most memorable storyline of a film straining at every moment to be important.

It’s quite telling actually that the film’s most memorable speech is put into the mouth of Tim Blake Nelson’s oil executive (“Corruption is why we win!”) a character so lightly sketched out he barely appears other than making that speech. It’s a sign of the weakness of the film: characters serve purposes to the narrative and then disappear. These lightly sketched characters act out a lecture on world politics and economic-energy-driven corruption. Syriana needed room to breath in order to become a drama rather than a lecture. Instead it’s a decent workmanlike movie with ideas that it never manages to really express in a way that will make you care. When it tells you rich businessmen love money and powerful politicians love power you’re likely to basically say “yeah. I know. Tell me something new…”
Email ThisBlogThis!Share to TwitterShare to FacebookShare to Pinterest
Labels: Alexander Siddig, Amanda Peet, Chris Cooper, Christopher Plummer, George Clooney, Jeffrey Wright, Mark Strong, Matt Damon, Political dramas, Social issues, Stephen Gaghan, Tim Blake Nelson, William Hurt