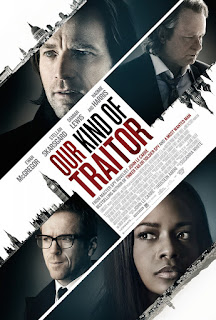 John Le Carré’s works often revolve around a dark, cynical view of government agencies as corrupt, indolent and focused on petty or personal concerns rather than doing what’s best for the country and its people. Is it any wonder that there has been such a burst of interest in adaptations on film and television of his work?

Our Kind of Traitor is straight out of the Le Carré wheelhouse. On a holiday to save their marriage (after his infidelity), Perry (Ewan McGregor) and Gail (Naomi Harris) bump into charismatic Russian gangster Dima (Stellan Skarsgård). Perry and he strike up a surprising friendship – and before he knows it Perry is agreeing to carry information from Dima to the British intelligence services. This attracts the attention of MI6 officer Hector (Damian Lewis) who sees this as an opportunity to expose the corrupt links between Russian criminals and high-level British bankers and politicians. Dima, however, will only hand over the goods if he is promised asylum for his family – something the British authorities, aware of the mess his revelations could cause, are not happy to allow…

Susanna White, veteran of some excellent television series of the last few years, puts together a confidently mounted and generally well-paced drama, with many of the expected Le Carré twists and turns. If she leans a little too heavily on the murk – the green and blue filters on the camera get a big workout here – it does at least mean that we get a real sense of the twilight world the characters operate in, meaning flashes of wide open space and bright daylight carry real impact. She also really understands how violence is often more shocking when we see the reaction of witnesses rather than the deed itself – all the most violent and tragic events in the film are seen at least partly from the perspective of the reactions of those witnessing them. The sense of danger on the edges of every action, stays with us while watching this unjust nightmare unravel.

It also works really well with one of the core themes of the movie: our ability to feel empathy for other people and how it affects our choices. Dima is driven towards defection because of his distaste for the increasing violence of the next generation of Russian criminals, and their lack of discrimination about who they harm. He’s all but adopted the orphaned children of a previous victim of violence, and his motivation at all points is to insure his family’s safety. Hector, our case officer, is motivated overwhelmingly by a sense of tragic, impotent fury about his rival ensuring Hector’s son is serving a long sentence in prison for drug smuggling.

And Perry is pulled into all this because he has a strong protective streak – something that eventually saves his marriage. Perry frequently throws himself forward to protect the weak, with no regard for his safety, from his unending efforts to protect Dima’s family to throwing himself in fury at a mobster roughing up a young woman. His intense empathy and protective streak motor all his actions and run through the whole movie.

It’s a shame then that his actual character isn’t quite interesting enough to hold the story together. Nothing wrong with McGregor’s performance, the character itself is rather sketchily written. Aside from his protectiveness we don’t get much of a sense of him and – naturally enough – he’s often a passenger or witness to events around him. Similarly, Naomie Harris does her best with a character that barely exists.

Instead the plaudits (and meaty parts) go to Skarsgård and Lewis. Skarsgård dominates the film with an exuberant, larger than life character who never feels like a caricature and reveals increasing depths of humanity and vulnerability beneath the surface. Lewis matches him just as well, at first seeming like a buttoned-up George Smiley type, but with his own tragic background motivating a long-term career man to slowly build his own conscience.

Our Kind of Traitor handles many of these personal themes very well, but it doesn’t quite manage to tie them into something that really feels special. Instead this feels a bit more like a Le Carré-by- numbers. We get the shady secret services, government greed, good people trapped in the middle – even some of the characters, from the foul-mouthed spook played by Mark Gatiss to Jeremy Northam’s jet black Aubrey, seem like they could have appeared in any number of his novels.

There is a film here that is wanting to be made about the invasion of the UK by dirty Russian money – but it never quite comes out as this Dante-esque, Miltonian spiral. Instead the film too often settles for more functional thrills, a more traditional or middle-brow approach that works very well while you watch it, but doesn’t go the extra mile to turn this into something you will really remember.
Email ThisBlogThis!Share to TwitterShare to FacebookShare to Pinterest
Labels: Damian Lewis, Ewan McGregor, Jeremy Northam, John Le Carre, Mark Gatiss, Mark Stanley, Naomie Harris, Spy thrillers, Stellan Skarsgård, Susanna White, Velibor Topic