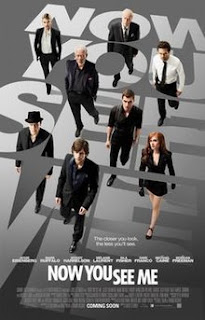 Sometimes the simplest tricks are the best. Remember David Blaine? All his huge illusions and stunts weren’t worth thruppence compared to the simple awe of watching him perform card tricks in front of stunned regular folks in the streets. This film is pretty much the same, a dazzlingly shot con-trick of a film that wants to reveal a stream of tricks that it was holding up its sleeves over its runtime, each twist being less and less impactful. The most magic thing in this is the sleight of hand card trick Jesse Eisenberg performs at the start of the film – after that it’s like watching your soul drain away over two hours under an onslaught of wham-bam twists.

Anyway, J Daniel Atlas (Jesse Eisenberg), Merritt McKinney (Woody Harrelson), Henley Reeves (Isla Fisher) and Jack Wilder (Dave Franco) are a ragtag bunch of professional magicians, hypnotists, stunt performers and conmen who are recruited by a shadowy magical organisation known only as The Eye for reasons unknown. One year later they are performing huge stadium gigs, with the support of millionaire insurance man Arthur Tressler (Michael Caine), as The Four Horseman. During their first show they magic millions of Euros out of a bank in Paris while performing in Las Vegas – a stunt that attracts the attention of the FBI and Interpol who send agents Dylan Rhodes (Mark Ruffalo) and Alma Dray (Mélanie Laurent) to investigate. Meanwhile, the Horsemen are on the run from the law, and still working towards ends unknown, while dodging magic debunker Thaddeus Bradley (Morgan Freeman). But is anything as it seems?

The answer of course is no. But then what do you expect from a film that proudly announces (frequently) “the closer you look, the less you will see”. It’s a pretty good message for the film – but not in a good way – as Now You See Me is as insubstantial as air, a puff of showmanship so pleased with its twists and tricks that it completely fails to have a heart. By the time we get to the end of the film and realise almost everything we saw over its runtime wasn’t real you’ll feel disconnected rather than engaged.

In fact, as a heist/con movie, this isn’t that good. The formula depends on you thinking you’ve got it worked out and then BOOM you realise you didn’t. It also by and large depends on charming, playful leads (think Newman and Redford in The Sting) and on a sort of consistent logic where you get the satisfaction of pieces you didn’t even notice falling into place as vital clues. Now You See Me does none of this.

In fact, it’s so pleased to tell you that it pulled the wool over your eyes that it rushes several of its reveals with an indecent haste. It largely fails to sprinkle clues throughout the film and basically plays unfair with the whole audience. There are things you can never hope to work out as they are based on not being shown vital clues early on. Characters and the film carefully never reveal any hints of true allegiances or motivations until the last possible minute.

In fact it’s one of those films where most of the characters are, for large chunks of time, really pretending to be someone else. This can work, but it doesn’t here as most of the Horsemen are basically rather unlikeable arrogant arseholes. The four actors mostly coast through basic set-ups, and you’ll be pleased when they fade into the background in the second half of the move (all four of them are basically decoy protagonists, and the film shelves them when it can no longer think of a way of hiding their true motivations in plain sight any more). The real lead is actually Mark Ruffalo’s FBI agent, and Ruffalo is a charming, likeable, schleppy presence that you can root for, even if the plot takes us on a character journey with him that makes no real sense (the clue for this is the film’s references to a magician who buried a card in a tree years earlier for one trick).

It’s flashy in its film making, and Leterrier has a workmanlike touch with making things look cool and putting the camera in interesting places. He has no real idea of character or pacing – the film is frequently quick, quick, slow – and he creates a film here that has nowhere near the brains it thinks it has. It’s all flash and no substance. Look too closely and you’ll see nothing there.
Email ThisBlogThis!Share to TwitterShare to FacebookShare to Pinterest
Labels: Common, Dave Franco, Isla Fisher, Jess Eisenberg, Louis Leterrier, Mark Ruffalo, Mélanie Laurent, Michael Caine, Michael Kelly, Morgan Freeman, Woody Harrelson