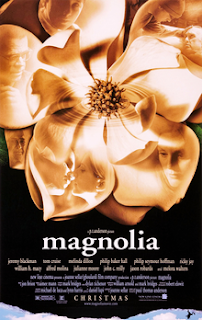 After the success of Boogie Nights, Paul Thomas Anderson landed a terrific deal: he could make what he wanted, about anything at all, at any length he liked. “I was in a position I will never ever be in again” is how Anderson remembers it. And thus was born Magnolia, a beautifully assembled labour of love, an imaginative remix of Robert Altman’s Short Cuts with biblical image. A sprawling collection of short stories, which leans into high tragedy and melodrama, Anderson’s Magnolia is the sort of film that is always going to find a special place on a film buff’s list of favourite films.

The film follows the lives of several people over a single day in LA. Legendary host of long running quiz show What Do Kids Know? Jimmy Gator (Philip Baker Hall) is dying of cancer and desperate to reconcile with his traumatised daughter Claudia (Melora Walters). Claudia is tentatively starting a relationship with devout and kindly police officer Jim Kurring (John C Reilly). Former champion of Gator’s show, “Quiz Kid” Donnie Smith’s (William H Macy) life is a disaster after his parents stole his winnings, and he’s struggling to hold down even the most basic of jobs. Former producer of the show Earl Partridge (Jason Robards) is also dying  of cancer, cared for by his dedicated nurse Phil (Philip Seymour Hoffman). Earl’s wife Linda (Julianne Moore) is wracked with guilt, while Earl himself is desperate to reconcile with his estranged son Frank Mackey (Tom Cruise), now a self-help guru who coaches men on how to pick up women.

If you can’t see the links between the works of Robert Altman here, then you clearly need to look again. But it’s well worth it, as Anderson is a worthy successor to the master. He directs with a fluid confidence that comes from a director making a picture to please himself. Magnolia is frequently self-indulgent in its style and quirks, but it doesn’t matter when the effect of watching the film is so rewarding. From long takes to having the characters (all of them in different locations) sing along with Aimee Mann’s “Wise Up” at a key moment in the film, there are flourishes here that will annoy some but will be precisely what others fall in love with the film for.

And that love is deserved as this is a thoughtful and intelligent film about the impact the past (and specifically our parents) can have on us. As the man said, “they fuck you up, your Mum and Dad”. Certainly the case here. From “Quiz Kid” Donnie Smith to Claudia Gator, the film is crammed at every level with children (young and old) who have had their lives negatively affected by their upbringings. The past is a heavy burden, and it’s near impossible to shake-off – and in the cases of Donnie and Claudia brings with it a heavy dose of self-loathing.

But what’s striking is that problems with the past don’t result in the same outcomes for people. Who would have thought that seemingly misogynistic motivational speaker Mackey’s beef with his dad is that Earl walked out on him and his dying mother when Mackey was a teenager? Part of the fascinating psychology of the film is how a son who loved and cared for his mother grew up to encourage men to treat women just as his father treated his mother. Is this some sort of perverse way to feel closer to the father who abandoned him? Perhaps Mackey has defined his life around hatred for his father, along with a deep longing for love – and perhaps his inability to deal with these feelings led to a professional career espousing the exact opposite? One of the neat things about Anderson’s film is that it largely avoids pat answers to this sort of thing. It’s left up to us to decide for ourselves – and perhaps reflect on how every person is an unanswerable riddle.

Whatever the answers are, it’s clear that parental problems are being paid-forward. The new Quiz Kid champion Stanley Spencer is a precocious child genius, being treated as an ATM by his father, who brags about his son while passive-aggressively demanding Stanley keep winning to continue funding his failing acting career. Stanley is a desperately unhappy child, more than smart enough to realise he is a performing monkey but unable to escape. And how can you get out of knots like that? After all, the film shows us one possible future for Stanley with Donnie – but walks a deft tightrope on whether the same life of loneliness and disappointment is inevitable for Stanley or not.

These familial clashes are introduced in the first hour and then simmer with exquisite timing during the film’s second hour. Anderson’s brilliant decision to build the film around a live recording of Gator’s quiz show means we are constantly reminded (as the show plays in the background throughout other scenes) that everything we are seeing is happening at the same time. The second hour of the film is a superbly deft cross-cutting from storyline to storyline, each building in tension. The desperation and entrapment in each scene beautifully spark off and contrast with each other. The sequence is at times marginally undermined by a slightly oppressive music score, but it’s beautifully assembled and shot and carries a real power – a superb balancing act of almost real time action that plays out for a nearly the whole of the second act.

And Anderson knows skilfully to balance the gloom with real sparks of humanity and decency. Two characters in the film – Reilly’s cop and Hoffman’s nurse – are decent, kind and generous souls who have an overwhelmingly positive impact on every character they encounter. Both characters – and both actors are superb in these roles – are quiet, low-key but humane people who offer a quiet absolution to a host of characters, and opportunities to move on from the burdens of the past. Hoffman’s Phil is a genuinely kind person, who puts others before himself while Reilly’s Jim (surely the best performance of the actor’s career) is such a sweet, well-meaning, honest guy, that you understand why so many people feel bound to unburden themselves to him. 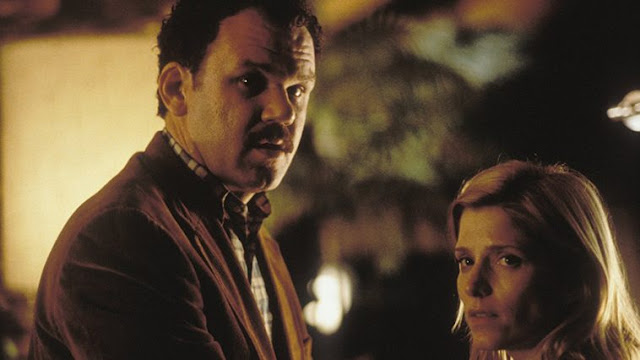 There is a lot to unburden in this film, and some of these moments tip over into melodrama at points. There are tear stained deathbed confessions, and angry, tearful moments of resentment and guilt bursting to the surface. At times, Magnolia is a little in love with these big moments, and indulges them too much, but it offers so many moments of quiet pain that you forgive it.

Not that the film is perfect. Today, even Anderson says it’s too long – and it really is. Unlike Altman, Anderson is less deft at pulling together all the threads in an overlapping story. This is effectively a series of short films intercut into one – the plot lines don’t overlap nearly as much as you might expect, with only Jim moving clearly from one plotline to another. It’s also a film that is driven largely by men. Of the few female characters, all are defined by their relationship to a man (and an older dying man at that), and not one of the female characters isn’t some form of victim.

Anderson’s failure to really wrap the stories together means you can imagine unpicking the threads and reducing the runtime. Julianne Moore’s role as Earl’s guilty, unfaithful trophy wife (is she unaware of Earl’s own past of infidelity?) could have been easily shed from the film. Moore, much as I like her, gives a rather hysterical, mannered performance that feels out of touch with some of the more naturalistic work happening elsewhere in the film. The most melodramatic of the plots (every scene features Moore shouting, weeping, shrieking or all three), it also ends with the most contrived pat “hopeful ending”. It’s a weaker story that lags whenever it appears on screen.

Magnolia starts with a discussion of coincidence, but it’s not really about that – and the coincidence of all these people seems largely in the film to be reduced to the fact that they are all living in the same city with similar problems. It’s a slightly odd note to hit, as if Anderson slightly shifted the focus away from lives moving into and out of each other, in favour of a series of more self-contained linear stories. (That opening montage discussion of three (fictional) moments of fate and chance, while beautifully done, could also easily be trimmed from the film). 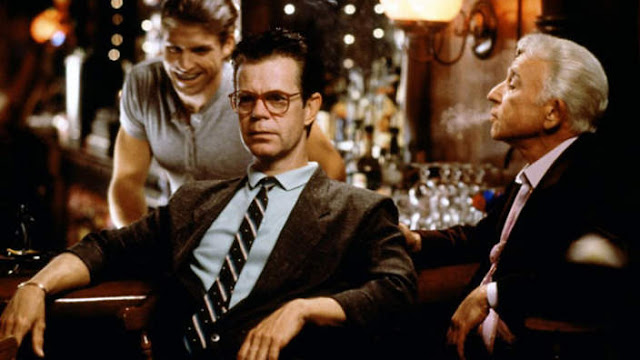 But then, these tweaks wouldn’t change the fact that Magnolia is a superbly made film, or that Anderson is a great filmmaker, even if he doesn’t quite manage to create the sprawling, interweaving, state of the nation piece he’s aiming for here. But as a collection of beautifully done short stories, it’s great. And the acting is superb. Tom Cruise drew most of the plaudits for an electric performance of egotism and triumphalism hiding pain and vulnerability near the surface, Anderson using Cruise’s physicality and intelligence as a performer better than perhaps any other director. Among the rest of the cast, Hall is superb as the guilt ridden Gator, Macy very moving as the desperate Donnie and Melora Walters heartrending as the film’s emotional centre, who ends the film breaking the fourth wall with a tender smile, that is perhaps one of the most beautiful final shots of modern cinema.