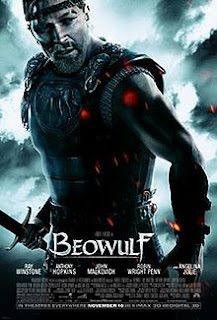 Around the turn of the century a new style of film-making (and I guess acting) burst into the world of Hollywood. There had been special effects and there had been animation. We’d seen actors transplanted by CGI into any number of settings and locations. But motion-capture was something else. Its leading pioneer is of course Andy Serkis, and the art involved essentially placing a load of dots on people’s faces to record every inch of their movements and then feed this physical performance into a computer to create a CGI personality that unified actor and special effect.

Zemeckis, always a pioneering film maker, was fascinated by the art and had used it on previous films – but Beowulf was his real push to create something that couldn’t have been done without motion capture. So Ray Winstone – a bulky middle aged actor – is here transformed through the computer into a slim, muscular man in his early thirties. Winstone plays Beowulf himself, and Zemeckis’ aim here was to bring to life in a way that had never been done before the ancient poem. And not only the humans would be motion captured: Grendel and his mother (played by Crispin Glover and Angelina Jolie) would also be powered by real-life human performances.

It makes a fascinating film visually to watch. Zemeckis’ camera work has the complete freedom to roam anywhere around the actors (every move they made was recorded into the computer from every angle). And he doesn’t hold back, with the camera swooping and sliding around every dimension and angle of the locations, often moving freely and swiftly with a series of engrossing tracking shots and fast moving sweeping panoramas.

It also means that having real performances behind every creature in the film adds a real human dimension to even the most vile monsters. Crispin Glover’s physical commitment – not to mention the searing, twisted pain in his every moment – humanises Grendel in a way his simple monstrous appearance never could. The later dragon has a real feeling of humanity behind it, for all its scales and arrogant cruelty. Angelina Jolie reported she felt surprisingly uncomfortable when she saw the final realisation of her performance as Grendel’s mother – imagined here as an extremely seductive succubus, permanently naked with perfectly formed curves – but the entire thing works because of the performance behind the animation.

Some of the motion capture isn’t always of course completely successful. There is something still slightly too shiny, slightly too polished about the faces – part of the film being a slightly strange halfway gap between animation and real acting. The eyes suffer most – for all the efforts of the animators there is something still slightly dead behind, something not quite of the human face about them. It’s something that you can’t help but spot, and can’t help but be disconcerted about.

But it largely comes second to some of the imagination that exists in this version of the story. Zemeckis’ film making is often visceral and bloody – and the action sequences are as involving as he manages to make the other sequences are engaging. Not everything works: Beowulf fights Grendel in the nude, and the decision to have Beowulf’s ‘bits’ constantly obstructed by a series of fortuously placed items smacks somewhat of Monty Python and seems tonally off from the rest of the film. But by and large it works.

It does this because the script from Neil Gaiman and Roger Avery mixes the original poem with something reminiscent of Macbeth. One of its key themes is the seduction of power and the inner guilt of heroes who know that they have feet of clay. Grendel is reimagined as the son of Hrothgar – seduced by Grendel’s mother with offers of power, he creates with her Grendel, the living embodiment of his flaws. Grendel’s mother represents the creeping temptation of greed, ambition and the “old ways” (the film plays up the Christianisation of the Vikings in the background throughout). She’s effectively all the witches rolled into one (but much hotter).

And Beowulf is ripe ground for our temptations as it’s made clear right from the start that – while clearly a great warrior – he is also a triumphalist blowhard who enjoys repeating and expanding his own myth. A story recounted about his fighting sea monsters during an epic sea swimming competition (‘It used to be just one’ comments best friend Wilfric) is a masterpiece of puffed up self-promotion on top of genuinely impressive deeds, Beowulf’s words diverging from the story we see on screen towards in the end is a neat foreshadowing of his eventual seduction by Grendel’s mother.

Beowulf isn’t an empty boaster though. He’s a sympathetic Macbeth who feels guilt about the “sound and fury” that his life story has become. The aged Beowulf in the second half of the film is weary, tired and full of self-loathing, his great name an oppressive weight he can’t live up to or escape from. He’s a man who knows all the time he has feet of clay, but the name of a God – and that the name is so important he can’t let anything puncture it. Wilfric twice refuses to allow Beowulf to divest his conscience: the legend is so important it’s been printed as fact.

Ray Winstone handles this all pretty well – even if a lot of this requires sorrow behind the eyes, that motion capture simply can’t provide – even if the transformation of his face makes him look more like Sean Bean than a younger version of himself. Hopkins and Malkovich embrace all the cavorting and expressive body movement of motion capture like the old hams they can be. The film’s real highlight is Robin Wright who makes a great deal of Hrothgar then Beowulf’s sad wife, unhappy, quietly aware of both her husband’s flaws and perhaps the only level headed person in the Kingdom.

Beowulf has some fine technical work, but its real lasting interest is the psychological depths it tries to explore in its hero. Far from the perfect warrior, he’s someone doubtful and doubting, whose insecurities and vulnerabilities grow throughout the film and finally – like a mix of Lear and Macbeth – only becomes fully sympathetic at the very end. It makes for an interesting remix of a story nearly older than any other in our culture.
Email ThisBlogThis!Share to TwitterShare to FacebookShare to Pinterest
Labels: Alison Lohman, Angelina Jolie, Anthony Hopkins, Brendan Gleeson, Crispin Glover, John Malkovich, Ray Winstone, Robert Zemeckis, Robin Wright