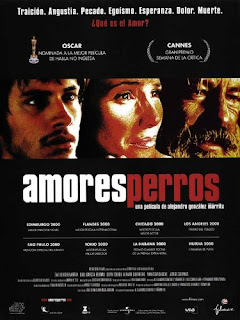 What links playboy kid Octavio (Gael García Bernal), model Valeria (Goya Toledo) whose career is so high it can only go downhill, and El Chivo (Emilio Echevarría) a hitman who lives like a scruffy hobo? Love of course! Well that and a near-fatal car accident that has life-changing effects for all three of them. And dogs too. They all love dogs. Iñárritu’s debut film plays like a mixture of Altman and Tarantino, throwing together three small-scale stories into something that feels electric and fast, but also strangely empty, as if it is skirting the surface of its characters without really delving into them.

Its interesting re-watching this film now, after Iñárritu has become a double Oscar winner and one of the world’s leading directors. The mastery of technique is all there in Amores Perros. Iñárritu’s style with the camera is fluid, intense and engrossing, and he uses a wide combination of fast-cut editing tricks, stylish camera work and handheld cameras that immerses the audience in the seedy underworld of Mexico City. As part of a wave of Latin American films made at the time, Amores Perros perhaps comes second only to City of God as an example of how to bring the danger and reality of the streets to the screen. Shot with a drained out style that makes everything feel even more grim, dirty and depressing than it probably is, Amores Perros is as sharp a dog bite of cinema as you could expect.

Within this brilliant evocation of urban cinema work, Iñárritu crafts a series of three morality tales so universal in their structure and themes that they could just as easily been pulled from Chaucer or Boccaccio. It works as well, these three short films linked by common themes, cleverly structured narratively so that we learn more about each story as the other two unfold. Iñárritu structures the pivot of the story being the car crash that opens the film. The causes leading up to it are covered in the first story, with the events of the second story hinging on its effect on model Valeria in the other car, and the third spinning out the change of lifestyle it helps push on hitman El Chivo. Each story starts at different places in relation to others and each expands and deepens the overall picture we get of Mexico.

And it’s a place with its own underworld economy, powered by everything from murder and robbery to dog fighting. Octavio is a low-rent criminal (as is his brother) who ends up sucked into pitching his vicious Rottweiler into dog fighting. El Chivo lives in filth and dirt and takes commissions from corrupt cops to knock off targets. Both these stories hinge on inequality and desperation: Octavio and his family are working-class and have remarkably little. El Chivo is literally a tramp, a man who has turned his back on his old affluent life in disgust. The people they deal with are hoodlums and criminals and the few middle-class people who intrude into their lives do so with contempt. It’s all particularly obvious when, in the middle chapter, we head into the world of model Valeria and her lover, magazine editor Daniel – although even they are struggling to make ends meet.

It’s this middle story that actually makes for a fascinating centre point in the story. Valeria is crippled in the car accident, bed-ridden and disabled in the very week that Daniel has finally left his wife and children to be with her. Daniel (well played with a growing frustration and disappointment by Álvaro Guerrero) increasingly finds it hard to keep his patience with the disappointed and increasingly despairing Valeria (affecting work by Goya Toledo). This story of romantic, illicit love turned far too quickly into a burdensome marriage filled with dependencies has a universal tragedy to it. Their problems hinge around the disappearance of Valeria’s beloved dog, which may or may not be trapped under the damaged floorboards of the flat, a despair that becomes an obsession for Valeria and a constant burden for Daniel. 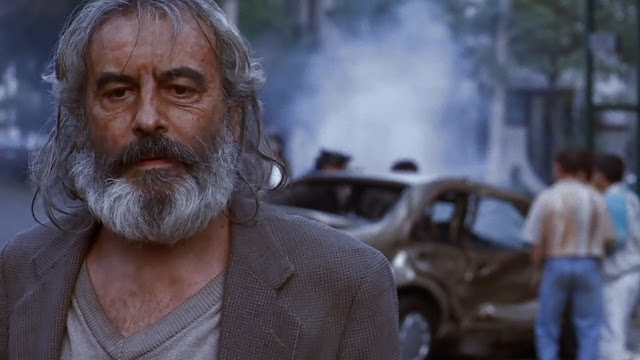 Valeria’s love for a dog becomes a substitute for the disappointing, passion-free relationship that she and Daniel find themselves locked into (Daniel even takes to calling his ex-wife to hear her voice). Dogs are more of a tool to Octavio. His vicious Rottweiler is his route to the money he needs to get his brother’s wife to elope with him. Gael Garcia Bernal plays Octavio with the edgy, simmering energy that powered so many Latin American films of the era, his face a mixture of surly resentment and romantic ambition. Octavio’s passionate flings with his sister-in-law have a youthful immaturity to them, that even she seems to recognise (his brother, while a somewhat absent husband, is clearly someone she relates to far more than the sexy Octavio). Discovering his dog’s capability for violence, he moves into the underworld of dog fighting, opening himself up to a world of trouble.

This use of dogs as a tool for greed and ambition perhaps reflects Octavio’s lack of emotional maturity and understanding of the impact of building a future with his sister-in-law, no matter how much he may wish to run away. For hitman El Chivo surprisingly, dogs are instead surrogate loves and emotional partners who have replaced the family (and indeed his regard for people in general) that he gave up long ago. Played with an expert anger masking deep sadness and self-loathing by Emilio Echevarría, El Chivo loves his dogs with all the intensity and care that is lacking from his relationship with humans. It’s this that gives El Chivo the self-regard that allows him to begin to change and rebuild his life.

Iñárritu’s primal film handles these universal themes of love and despair with intelligence and energy, even if it’s essentially three tales that play out more or less as you might expect. Because this film is essentially a collection of age-old morality tales, handsomely mounted but fundamentally predictable. What might you really learn about human nature from this film? I’m not sure. Because this is a pretty standard, even narratively safe drama, for all the minor tricks it plays with timelines. I’m not joking when I say this would not look out of place in The Canterbury Tales – and the moral issues it presents are lacking in shades of grey. Adulterers are punished, cheaters do not prosper, the “bad” are generally punished and for all that one of our characters is a hitman, he’s repeatedly shown to have more depth and hinterland than most of the rest of the characters in there.

It’s an interesting reflection on Iñárritu. He is without a doubt a major director of cinema, whose skills with the camera and editing are flawless. He creates here a film that is absolutely striking in its vibrancy and cinematic technique and its immediacy. But is it also a film that is a little too much about the mechanics of the stories rather than really invested in the stories themselves? I think it might be. Iñárritu is a master showman, but not necessarily a great storyteller and I think Amores Perros is a great example of that.
Email ThisBlogThis!Share to TwitterShare to FacebookShare to Pinterest
Labels: Alejandro González Iñárritu, Álvaro Guerrero, Crime drama, Emilio Echevarría, Gael Garcia Bernal, Goya Toledo, Mexican films, Vanessa Bauche