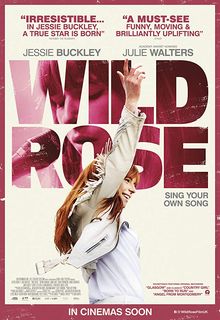 How do we find a balance between our dreams and the cold realities of our responsibilities? What do you do when your dream, what feels like the one thing you’ve been put on earth to do, never seems to come any nearer? And at what point does fixating on these dreams stop being naively exciting and start becoming selfish, as you ignore your children and others depending on you?

Rose-Lynn (Jessie Buckley) is released from prison back into her home in Glasgow. An immature screw-up, with a total lack of application but blessed with a blunt charm, Rose-Lynn has made a disaster of everything she has touched and has an almost non-existent relationship with her two young children who have effectively been raised by their grandmother Marion (Julie Walters). Rose-Lynn lands a job as a domestic cleaner thanks to a family friend, but her dream remains to go to Nashville and become a country singer. Her singing on the job is overheard by her wealthy employer Susannah (Sophie Okonedo) who decides to support her dream – but the temptation of her dream starts to sabotage her commitment to the relationship she is starting to build with her children.

Wild Rose on the surface (and in the marketing material) looks like an uplifting film about a young woman chasing her dream in the face of overwhelming odds. But it’s actually more like a 60s kitchen sink drama, spliced with country music. Rose-Lynn is a working-class single mother who had her two kids before the age of 18, who dreams of a better life but refuses to engage with her responsibilities in the real world. She basically is a dumb teenager who has never grown up, and has never given up on her fantasy of becoming a star. Like a sulky teenager, she rejects anything that feels like too much hard work – from learning a musical instrument to writing her own songs – and seems to believe just rocking up in Nashville with no plan and no contacts will magically land her a music career.

In actuality, Rose-Lynn is a rather selfish dreamer, with a self-destructive streak powered by laziness and a chippy resentment that cause her to frequently do her best to wreck opportunities. Pushing to get her security tag removed, she still heads out drinking until the last possible minutes of her curfew. Getting an opportunity to visit the BBC Radio studios, she prepares by getting drunk on the train. She miraculously escapes being fired the first day on her cleaning job, despite drinking from her employer’s drinks cabinet and dancing around her house not working the instant she is left alone. On top of which, she persistently lies or tells half-truths to everyone around her, and continually fails to deliver on commitments.

Your reaction to the film will be totally governed by your reaction to this character. So just as well she is played with such radiance and joie-de-vive by Jessie Buckley. A bombshell of a talent, Buckley manages to keep this character just the right side of charming. Her failures come not from cruelty or even conscious selfishness, but from a lack of maturity and just plain not growing up. She’s not ready to be a mother and not ready to deal with responsibility. But she’s still charming, she’s enthusiastic, she loves life and she wins friends easily. It just makes it all the more frustrating that she is such a screw-up.

And you can see why her mother (a marvellous performance of caring but long-suffering frustration by Julie Walters) still loves her, even while she is beyond disappointed about the mess Rose-Lynn seems determined to make of her life. Her two children – adorable little moppets – are frequently shunted to one side, and the film walks a fine line between Rose-Lynn’s obvious love for them and also her (unspoken) resentment that their very existence acts as an anchor on her following her dream (the dream she is manifestly unprepared for).

Into all this turmoil steps Sophie Okonedo as her middle-class wannabe bohemian employer Susannah. This is surely the oddest character seen in films for a while, a sort of middle-class saviour who offers a world of opportunity to Rose-Lynn (who has withheld the truth about everything from her background to her family). Rather than doing what a real person would do and fire Rose-Lynn on her first day, Susannah not only encourages her singing but milks her upper-middle-class uni contacts to land an Rose-Lynn an interview with BBC Radio 2 legend Bob Harris (making a bizarre cameo as himself) and then goes further by offering to throw a fundraiser for Rose-Lynn to go to Nashville. Why does she do all this? Who knows, it’s all required for the plot in order to artificially bring to head the clashes in Rose-Lynn’s life between her dream and her family.

But then that’s the nature of the film, which hinges on narrative contrivances and clichés delivered with a solid level of commitment from the cast. In truth, this clash between what we should do and what we want to do is something we’ve seen many times before. The film seems determined to have its cake and eat it by reaching a conclusion that both these things are equally important and that (I guess) we need to find a balance between them. It makes for a slightly odd ending, or series of endings – just when we think it’s going to wrap up, another scene follows giving us another coda.

But then I guess it’s not clean, just as life isn’t. The real focus anyway is less Rose-Lynn’s dream and more about whether she can grow up enough to look after her children and stop being such a screw-up. In that sense it’s a hopeful film – as you would expect of course – but it feels like the film should pick a side, not least in saying that sometimes your dreams of being a professional footballer, or actor, or singer might be something you need to put aside at some point when it’s clear they are never going to happen. But then who really wants to think that?
Email ThisBlogThis!Share to TwitterShare to FacebookShare to Pinterest
Labels: James Harkness, Jessie Buckley, Julie Walters, Social issues, Sophie Okonedo, Tom Harper