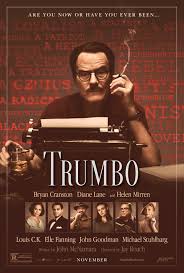 Hollywood loves to make movies about itself. It particularly loves to make movies where Hollywood is seen to be working on a higher moral plane. Trumbo is a film about the Hollywood Ten – the ten major screenwriters, directors and actors in Hollywood whom the industry blacklisted in the 1940s because of their sympathy for communism. Their leading light was Dalton Trumbo (Bryan Cranston), a rich screenwriter who finds himself imprisoned and unemployable. Trumbo encourages the writers to group together and write under pseudonyms for cheap film studios – although the right-wing in Hollywood continues to persecute them. Trumbo cannot reveal his identity as a writer – even after winning two Oscars – until 1960 when Kirk Douglas gives him a credit for Spartacus.

Trumbo is a very earnest, straightforward and rather bland re-tread of a key moment in Hollywood. It’s made with very little imagination, and remixes the world of 1940s politics into something that bears more resemblance to the political situation now than it does to the time. That’s not to defend the House Committee on Un American Activities (HUAC), the Congress Committee that led the campaign against communist subversion in Hollywood. Their persecution of communists flew in the face of American ideals of free speech, and their ruin of the lives of innumerable actors, writers and directors not found to be ideological pure is appalling.

But this is a film that simplifies its politics into a world of good and bad. It also works hard to try and whitewash Hollywood. Watch this film and you would believe it was Congress that had worked overtime in order to ban certain Hollywood creatives from working. Not so: the black list was put forward by the movie studios themselves and endorsed by the various guilds. Famous actors and directors, such as Humphrey Bogart and John Huston, furiously dropped their support for the Hollywood Ten after feeling they had been deceived by the Ten about their Communist associations. The film mentions none of this of course, running with a Hollywood-vs-Congress story line and crowbarring in people like McCarthy and Nixon who had very little to do with HUAC.

The main Hollywood figures campaigning against the Black List are either faceless Motion Picture Alliance for the Preservation of American Ideals types, or lip-smacking, practically mustachio-twirling gossip columnist Hedda Hopper (played with ludicrous OTT camp wickedness by Helen Mirren). John Wayne is the only recognisable Hollywood “legend” shown on the side of these guys – and, while he does get mocked for his non-war-record early on by Trumbo, he is quickly shown to be a moderate pushing for forgiveness for those who repent (and is noticeably absent from the villainy of the organisation later in the film) – Hollywood doesn’t want to be too harsh on one of its own.

Roach’s political simplicity also affects the actors who found themselves in an impossible position. As Michael Stuhlbarg’s Edward G Robinson points out, writers can work under a pseudonym, actors can’t. I was reminded of when Elia Kazan won an honorary Oscar and several famous Hollywood actors refused to applaud him, as Kazan had “named names” (or rather confirmed names HUAC already knew) when pulled before the committee. Robinson here is rammed into the same position, denounced as a snitch and a traitor for confirming the names of the Hollywood Ten when many of them are already in prison. As at the Oscars, I’m not sure it’s our place to judge. It’s cosy to assume “I would have told them no” but who can say if we would have or not? And can we really judge those who decided they didn’t want to go to the wall for a communist cause they didn’t believe in (as Kazan and Robinson didn’t, being more left-wing sympathisers than Stalinists like Trumbo)?

It’s another part of the film’s simplicity that Communism is not of course interrogated any further. Watch this film and the political views of Trumbo and his colleagues come across as nothing more than a more idealistic version of Obama-ism. In reality, Trumbo was a Stalinist who pushed for non-intervention in World War II until Russia was attacked by Hitler. This is not mentioned or explored in the film at all. In fact, the complexity of these idealists climbing into bed with a regime soaked red with blood that was suppressing freedom across large chunks of the globe isn’t even raised. Roach wants to tell a story about good-old-fashioned-Hollywood-democrats being persecuted by nasty right-wingers.

Away from the film’s simplicity it’s nothing special. Roach does competent work and there is the odd good scene. Trumbo himself is basically a rather selfish arsehole, who judges everyone around him and frequently ignores his put-upon family. Cranston does a decent job as Trumbo – but you can’t help but feel his generous Oscar nomination was in part a recognition for his work on Breaking Bad. Dean O’Gorman and Christian Berkel get some of the best scenes as Kirk Douglas and Otto Preminger working with Trumbo on Spartacus and Exodus. Bizarrely, the film totally avoids diving into the themes of Spartacus – or exploring what Trumbo was thinking about when he wrote “I’m Spartacus”, that paen to unity from the pen of a man abandoned by everyone, surely a hugely personal line not in the original source material – and instead skirts only on the surface, ticking off events. It kinda sums the film up: a solid enough to watch, but basically forgettable, that never engages with the inner lives of the men it claims to understand.
Email ThisBlogThis!Share to TwitterShare to FacebookShare to Pinterest
Labels: Adewale Akinnuoye-Agbaje, Alan Tudyk, Bryan Cranston, Christian Berkel, Diane Lane, Elle Fanning, Films about film, Helen Mirren, Jay Roach, John Goodman, Louis CK, Michael Stuhlberg