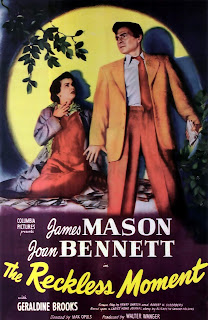 It’s a situation anyone could find themselves in: your daughter is infatuated with someone totally unsuitable, and despite all your efforts you can’t get her to shake him off. What’s perhaps more unusual is when the man turns up dead after an accident – but in such a way it looks like your daughter has bumped him off. What lengths will you go to, to save her from prison? That’s the problem faced by Lucia Harper (Joan Bennett) – and it’s made even more complex by the fact that the truth is out there and she’s being blackmailed by surprisingly sensitive small-time crook Martin Donnelly (James Mason), who finds himself developing feelings for Lucia.

Max Ophüls’ The Reckless Moment is an enjoyable enough noir-thriller, that mixes a wonderful sense of its locations with a perverted romanticism that first expresses itself through the daughter’s infatuation with a pathetic bent art dealer and then through the love blackmailer Martin Donnelly feels for his victim (and she for him). But it’s also a film about women, and how alone they can be when dealing with problems. Lucia’s husband is a never-seen presence on the end of a phone (busy building a bridge in Germany), her father-in-law is charming but useless and the two other men are criminals intruding into her life.

In fact this is quite ahead of its time with its thinking around women. Far from the usual tropes of a femme fatale, instead Mason takes on that role, while the mother turns out to be practical, brave and dedicated to keeping her family safe – while still more than a little open to illicit feelings of attraction. Lucia still has to balance all this with putting up a front of domestic business-as-usual with her family, not letting them see even a trace of the problems (including her daughter who is blissfully unaware of the situation she has landed her mother in).

Ophüls’ directs this with a moody intensity, with a wonderful use of the LA backgrounds, particularly of the boat landing where much of the crucial action takes place. His camera placement is impeccable, and he finds a number of interesting and striking angles to throw events into a sharp relief. It’s a beautifully shot film, with wonderful use of black and white, and hints of Ophüls’ background in German expressionist cinema. His camera constantly manages to put us in the shoes of Lucia with tracking shots (another Ophüls’ trademark) loyally following her actions and placing the viewers into her perspective of events to help build out bonds with her.

It’s a bond that obviously Donnelly ends up feeling very strongly tied to. James Mason enters the picture surprisingly late, and the film’s short length (less than 80 minutes) means many of the developments around the blackmail end up feeling rather rushed. Perhaps the plot didn’t even need the blackmail angle – there could have been more than enough tension of Lucia dodging the police case that surely should have built around her. Instead, the blackmail plot often feels rather forced, not least due to the build of a romantic subplot between the two characters.

It’s a romance that never quite rings true, partly because we never get the time for it to breathe. It seems forced and bolted onto the film because it is expected, rather than something that grows organically. It leads to sudden plot leaps, with Donnelly moving swiftly from business like to buying gifts and even offering to pay part of the blackmail for her to his shady boss. I’m not sure that the film ever earns this leap with its rushed runtime. It never pulls together into a romance that we can really believe in – and Lucia is such a carefully restrained and standoffish character that we don’t always get a sense of the emotions that she is carrying below the surface.

Despite this Joan Bennett does a decent job as the heroine, an intriguing and rather admirable character who gets caught up in wild and crazy events but never lets them overwhelm her. Indeed, Ophüls’ stresses her calmness and practicality at several points, never shaken by demands of events and responding with ingenuity and calm to a range of circumstances. Bennett might not be the most charismatic actress, but she does a very good job here. James Mason struggles slightly with his slightly incoherent character arc, but as a reluctant heavy he does a marvellous job here, while mastering the sense of ruffled, shabby charm Donnelly has. It does help believe that he might contribute to a reckless moment of attraction from Lucia.

The Reckless Moment is a well-made B movie, that Ophüls’ adds a great deal to with his empathy for Lucia and stylishly smooth film-making. It makes for a very polished film, which on its actual character and plot beats doesn’t really always make a great deal of sense – rushing us into relationships and feelings that it doesn’t always feel the film justifies. But despite that there is just enough style here, even if this is always a film destined for the second tier of classics.
Email ThisBlogThis!Share to TwitterShare to FacebookShare to Pinterest
Labels: Film noir, Henry O'Neil, James Mason, Joan Bennett, Max Ophüls, Thriller