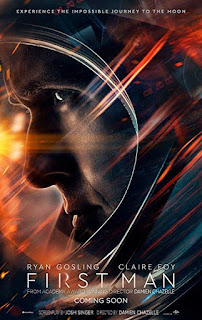 About halfway through this film, it struck me: Neil Armstrong is a not particularly interesting man who experienced the most interesting thing ever. It’s a problem that First Man, an otherwise exemplary film, struggles with: Armstrong himself, put bluntly, is unknowable, undefinable and, in the end, an enigma I’m not sure there is much to unwrap. Which is not to detract one iota from Armstrong’s amazing achievements, or his legendary calmness under pressure or his courage and perseverance. It just doesn’t always make for good storytelling.

First Man charts the years 1961-1969. During these years of professional triumph, Armstrong has success as test pilot, an astronaut on the Gemini programme (including command of Gemini 8, carrying out the first docking in space then saving his own life and the life of his pilot with his quick thinking when the mission nearly encounters disaster) and then the Apollo programme and his own first steps upon the moon. But Armstrong’s life is dogged by loss and tragedy, first his five-year old daughter to cancer, then a string of friends in accidents during the hazardous early days of the NASA space programme, including the deaths of Gus Grissom, Ed White and Roger Chaffee in the Apollo 1 fire. Armstrong becomes a man burdened with these losses.

There is very little to fault in the making of First Man – in fact it’s further evidence that Chazelle is a gifted filmmaker with a glittering future of great movies ahead. There are two things this film absolutely nails: the supreme majesty and awe of space and the terrifyingly rickety nature of the spacecraft we send men up into it in.

Helped hugely by a superb score by Justin Hurwitz, which makes extensive and beautiful use of a theremin, the film captures the sense of mankind’s smallness, our vulnerability, in the face of the overwhelming vastness of space. Mixing goose-bump inducing wailing solos with orchestral sweep, and encapsulating the feeling of how small and lonely man in space is, the score goes a long way to match up with the visuals in creating a sense of space. The Oscar-winning visual effects – mixing computer graphics with some ingenious practical effects – never intrude but bring out the gritty reality of tin cans in space.

Chazelle also really understands the impact of being so far beyond anything we can imagine, and his moon landing sequence is a thing of beauty. He expertly uses a number of close ups in the confined, claustrophobic campaign and largely eschews exterior shots (most of which only use the perspective of the crew’s view from the tiny windows, or of the cameras mounted on the side of the spacecraft). The moon landing follows suit, as we are thrown in alongside Armstrong and Aldrin as the lunar landing module takes its place on the moon – until the hatch opens with a whoosh of air (and sound) escaping the picture. And with that whoosh, the camera flies out of the hatch and switches – in an astonishing visual trick – from wide screen to IMAX shot to give us our first view of the vastness of space filling the frame. Suddenly, space fills the entire screen and the shocking beauty of the moon is a beautiful touch. We get as close as we can visually to experiencing the switch for Armstrong from confined spaces and beeping switches to vast panoramas and all-consuming silence.

And we really feel the switch, because Chazelle has so completely immersed us into the dangers and insecurities of the space programme. The spacecraft are repeatedly shown as alarmingly shaky, screwed together (the camera frequently pans along lines of bolts inside the cabins), thin, tiny, vulnerable capsules that shake, groan, whine and seem barely able to survive the stresses and strains they are put under. Any doubts about the risks the astronauts are under are dispelled in the opening sequence when Armstrong’s X-15 rocket twice bounces off the atmosphere and the internal cockpit around him glows orange under the extreme heat. But it’s the same on every flight we see – these craft don’t look safe enough for a short hop to the Isle of Wight, let alone hundreds of thousands of miles to the moon and back.

And that’s clear as well from the danger that lurks around every corner of the space programme. Death is a constant companion for these pilots and can come at any time. Armstrong himself escapes only due to a combination of luck and skill. When luck disappears, death follows swiftly for many of his co-pilots. Off-screen crashes claim the lives of three of his friends. Chazelle sensitively handles the horrifying Apollo 1 fire (news reaches Armstrong of the death of several friends, including his closest Ed White, while wining and dining politicians at the White House), and the terrible cost of this tragedy hangs over every single second of the moon programme. Fate or chance at any moment could claim lives. This grim air of mortality hangs over the whole film, a melancholic reminder of the cost of going further and faster to expand mankind’s horizons.

This grief also runs through Armstrong’s life and shapes him into the man he becomes. The death of Armstrong’s daughter at the start of the film sets the tone – the shocking loss of a child at such a young age is tangible – and it seems (in the film) as if this was the moment that led to Armstrong hardening himself against the world. He weeps uncontrollably at the death of his daughter, but later deaths are met with stoic coolness. Armstrong in this film is a cool enigma, who by the end of the film treats concerned questions from his children about whether he will return alive from the moon mission with the same detachment he shows at the official NASA press conference. “We have every confidence in the mission” he tells these two pre-teens, “Any further questions?” 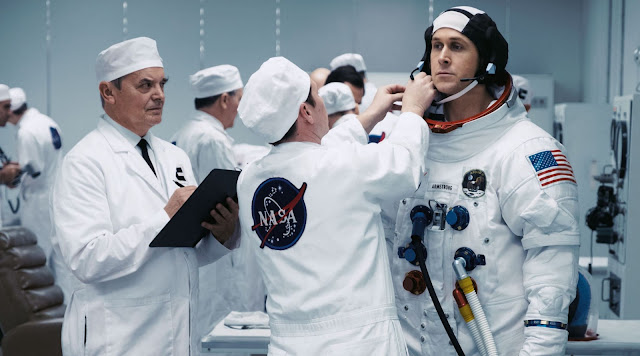 It’s the film’s main problem that in making Armstrong such an unreadable man, who buttons up and represses all emotion, that it also drains some of the drama and human interest from the story. While you can respect Armstrong’s professionalism and coolness under pressure, his icy unrelatability makes him hard to really root for over the course of two hours. The film also strangely only sketches in the vaguest of personalities for the other astronauts (Aldrin gets the most screentime, but is presented as an arrogant, insensitive blowhard) so we hardly feel the loss of the deaths. Its part of the attitude towards Armstrong as a man chiselled from marble, so lofty that the film doesn’t dare to really delve inside his own inner world or feelings but builds a careful front around him to avoid analysis.

It’s not helped by Ryan Gosling, whose skill for blankness makes him somewhat miscast here. Try as he might, he can’t suggest a deeper world of emotional torment below the calm surface, no matter how soulful his eyes. It’s a role you feel needed a British actor, who could really understand this culture of repressed stiff-upper-lipness. Indeed Claire Foy fares much better as his patient, loyal wife who holds her composure (more or less) for the whole film under the same pressures of grief as Armstrong. Gosling just can’t communicate this inner depth, and his blankness eventually begins to crush the film and our investment in its lead character.

First Man in almost every other respect is a great piece of film-making and another sign of Chazelle’s brilliance. But it’s never as dramatic as you feel it should be. Armstrong’s life doesn’t carry enough event outside his moon landing experience, and the film can’t make an emotional connection with the man, for all the loss and suffering it shows for him. For a film that is so close to so perfect on space and the Apollo programme it’s a shame – but makes this more a brilliant dramatized documentary than perhaps a drama.
Email ThisBlogThis!Share to TwitterShare to FacebookShare to Pinterest
Labels: Biography, Brian d'Arcy James, Ciarán Hinds, Claire Foy, Corey Stoll, Damien Chazelle, Jason Clarke, Kyle Chandler, Lukas Haas, Pablo Scheiber, Ryan Gosling, Space programme