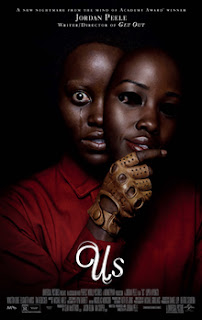 Jordan Peele’s Get Out is a tough film to follow. Smart, socially aware, funny, scary and haunting, it’s both one of the best horror films in years, and also one of the finest films made about modern America. It means his follow-up has some tough shoes to fill. Us perhaps doesn’t quite fill them as well, but judged on its own terms it’s another example of what a witty, skilled and intelligent film-maker Jordan Peele is and how skilfully he is able to both defy and define genre tropes.

The less you know about the plot the better, but Lupita Nyong’o plays Adelaide Wilson, a woman returning with her family to spend a holiday at Santa Cruz beach. While her husband Gabe (Winston Duke) and children Zora (Shahadi Wright Joseph) and Evan (Jason Wilson) are filled with excitement about the trip away, Adelaide fears returning to the location where she traumatically got lost one night in a hall of mirrors and encountered what felt like a doppelganger of herself. But as strange coincidences begin to mount up on their holiday, Adelaide begins to fear her whole family may in fact be in great danger…

Us mixes moments of unbearable tension with beats of almost slapstick humour. But, like Get Out, it’s also a film that leaves you grasping at the implications of its setting and ideas and opens up an ocean of possible interpretations and meanings. There is no chance at all Jordan Peele is a one-hit wonder, because this film is a blindingly good, brilliantly made chiller/thriller that stays with you once you leave the cinema.

It has such an impact largely because Peele is such an immersive and mesmerising director. His mastery of the tricks and turns of the genre are obvious, but what really makes this go the extra mile in effectiveness is his brilliant understanding of cinema. The camera work here is superb: he knows exactly how long to let a shot linger, exactly how a slow zoom or pull out can build tension and fear to such excellent effect, how the right choice of music can give a scene anything from an ominous Omen­-like terror to a streak of black comedy (there is one musical choice that is so perfectly hilarious and yet bleakly dark that it will have you laughing out loud despite the horror of the scene it accompanies). Us is a superbly made film by a master movie-maker, with every moment giving some imaginative flourish or striking image.

Us is also a film that works because of its depth and the humanity of its characters. Each character is given establishing moments – big and small – that immediately ring true and allow you to understand and relate to that person in seconds. Peele’s horror comes not from blood and guts – which is present but never exploitative (this is a million miles away from a mindless slasher) – but from watching people we have grown to care for and like going through ghastly events. A prolonged home invasion sequence is almost unbearable to watch in the chilling hopelessness of the family caught up in it: and it works because the empathy we have built up for these people allows us to put ourselves immediately into their shoes. The film has a brilliant understanding of our universal fears, from not being safe in our homes to being powerless to protect our children, and uses these for great effect.

The second half of the film (thankfully!) doesn’t continue this unbearable, stomach pulling dread (if it did you wouldn’t be able to watch it) and probably segues more into science-fiction-thriller territory. Not that that’s a problem as the film remains gripping and compelling throughout. It also delves further into the fascinating themes that Peele is confident enough to place on the table without feeling the need to hammer home an interpretation or meaning for the viewer. There are questions here throughout about the underbelly of America, the unspoken questions of class that run through the country. “We are Americans” the ‘villains’ of the film proudly state at one point – and the more we learn about them, the more we understand about why they cling to this idea of belonging. And of course why they feel the way they feel about their country.

What is class in America? How is this nation divided by the haves and the have nots - and how does it affect the decisions people make about their lives? What impact does commercialisation and the need to both have things and to be part of something have on us? What in modern America can both bring us together and drive us further apart? These are questions that run throughout the film - without clear cut answers - but challenge you to think for yourself.

The performances in amongst all this are brilliant. Lupita Nyong’o probably won’t get the awards recognition she deserves here for an extraordinary performance of empathetic gentleness and distress hardening into a grim determination to do whatever is necessary to protect her family. Nyong’o has a double role in the film, and this second performance is equally wonderful, a triumph not only of physical acting but also of tortured psyche. Winston Duke is equally good as a lovable doofus of a husband, while Wright Joseph and Evan Alex give exceptional performances as their children.

Peele throws in a late narrative twist – effectively signposted throughout – which challenges many of our assumptions about what we have been watching, but doesn’t distract from the social questions he has been tackling throughout the film in a subtle way. Once again his narrative control is flawless and the depth he can suggest behind horror tropes is staggering. Us is perhaps more of a fairground ride than Get Out, more about the terror of being chased and the black comedy of ordinary people fighting back with extreme violence, but it’s a damn entertaining one and leaves you with more to think about the longer you reflect on it.
Email ThisBlogThis!Share to TwitterShare to FacebookShare to Pinterest
Labels: Anna Diop, Elisabeth Moss, Horror film, Jordan Peele, Lupita Nyong'o, Social issues, Winston Duke, Yahya Abdul-Mateen II