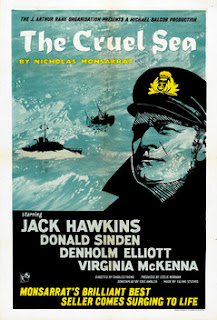 In 1953, The Cruel Sea was a colossal hit at the UK box office. With only a few years separating viewers from the sacrifices and struggles of war, it’s not hard to see why. The Cruel Sea is all about those struggles and sacrifices, about carrying on and doing your duty despite it all. But it’s also a film that understands the impact these have, and that that stiff upper lip is often covering a trembling bottom one. That stoic front is sometimes just that: a front.

Jack Hawkins plays Lt Commander George Ericson, commanding a corvette on convoy duty in the Atlantic ocean. His mission? Make sure those ships make it through and destroy U-boats wherever possible – and everything else is secondary to that. But of course the real battle is against the cruel sea itself: and everyone sailing on her is at threat at any moment from losing their life. In the mid of this the men deal with losses at sea, losses at home, and the constant pressure of always being ready to do-one’s-duty.

On the surface, The Cruel Sea is pretty much the quintessential 50s British war movie. The upper lips are stiff, the accents are super clipped. Everyone is pulling together, regardless of class. Duty, king and country come before everything. But actually, this is a more complex film than all that. The Cruel Sea drills down into the psychological cost of war, and the impact of putting duty to the war above and beyond the needs of the regular sailor. Protecting the convoys and taking out these u-boats come first, and if that means sacrificing lives then it’s got to be done, regardless of the psychological impact that might have on the guy who makes the call.

Jack Hawkins is that guy, and this role pretty much cemented his niche in mainstream as the gruff, duty bound, slightly distant, quintessential officer type. But Hawkins performance here is that entire impression as a front, hiding his own doubt and guilt. During this film Ericson not only has to deal with his first ship sinking – with a huge loss of men – but also his decision to prioritise sinking a u-boat over saving men from a downed convoy ship trapped in the water. The depth charges he orders lead to the deaths of those men in the water: “bloody murderer!” screams an outraged crewman under his command.

And bloody murderer is exactly what Ericson thinks he is. Its’ the tough – and probably right – decision but the deaths of those sailors don’t sit easy with him. He’s the tough captain who can make the call – but his next shore leave sees him getting guiltily drunk and then tearfully expressing his doubts and guilt to his second-in-command. It’s clear that the pressure of making these calls, of sacrificing lives is something Ericson cannot wear lightly – and Hawkins performance in these moments breaks through the reserve of the 1940s to show a real depth of post-traumatic stress and guilt. Hawkins’ performance is raw, touching and above all real – and you feel he is expressing the survivor guilt of a generation who had all made tough calls during nearly a decade of war.

And The Cruel Sea is all about those tough choices, and learning to deal with them. It’s also about that difficult balance between life at sea and life at home. Some families suffer terrible losses, some sailors come home to find loved ones have been killed in the blitz, others find that their wives have failed to stay loyal in the long months they have been away. At sea, there are more than enough pressures and threats, and that cruel sea takes a continuous toll, which is hard to forget.

The scenes shot at sea have a professional tension and to them, and a really capture that sense that the most noble thing to do is to get on with doing your duty. The officers and men keep a reserve and a determination, as well as aiming to keep their spirits up as much as they can. There is very little patience for those who can’t or won’t put the good of the many first. Stanley Baker’s braggart second-in-command – an insecure stickler for rules, who is clearly both incompetent and cowardly – is treated with contempt and swiftly persuaded to jack it in for a spurious health reasons.

Meanwhile, the rest of the officers are decent, hard-working, determined and put duty and the lives of others in front of their own. Donald Sinden, underplaying (and a world away from the larger than life characters he would go on to play) is excellent as the young officer who grows in statue and authority, as well as having a very sweet romance with Virginia McKenna’s WRNS officer. John Warner and a young Denholm Elliott are equally good as young officers who have to deal with tragedy.

Because dealing with tragedy is what this film is about. The war at sea is long, often boring and punctuated with danger and loss. The opponent is hard to see, and the clashes with them never clean cut or open. For years of campaigning, you can count on one hand the number of direct clashes Ericson and his crew have with visible u-boats. Despite this, each of these attacks carries huge costs. The war at sea is unrelenting, tough and terrible: but also calls for men who are able to put themselves second, no matter the cost. It’s a great look at the mentality of a whole generation: no wonder it was such a hit.
Email ThisBlogThis!Share to TwitterShare to FacebookShare to Pinterest
Labels: British Films, Charles Frend, Denholm Elliott, Donald Sinden, Jack Hawkins, John Stratton, John Warner, Stanley Baker, Virginia McKenna, War film, World War Two