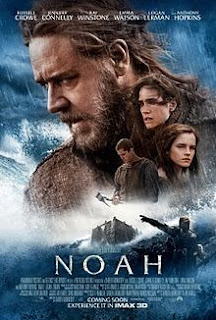 Everyone kind of understands what they are going to get when watching a Biblical epic right? A lot of “thous” and “thees”, sandals and swords, priests with long beards, sweeping musical scores and an actor like Charlton Heston (ideally just Charlton Heston) at the centre, standing tall with the word of God behind him. Obviously Darren Aronofsky must have been unfamiliar with this formula as he put together Noah, without a shadow of a doubt the weirdest Biblical epic you are ever going to see.

Set at a time that could be thousands of years either in the future or the past (with a steam-punk aesthetic and timeless mix of ancient and medieval technology with hints at modern ruins), God has had enough of man wrecking the world. He sends a cryptic vision to Noah (Russell Crowe), last descendent of Abel, telling him that a flood will take out the world. Noah will build an ark to protect the animals – but Noah also becomes convinced that God’s will is that mankind will not survive the flood. After Noah and his children die that’s it. This fanaticism is met with concern by his family, but also with fury from the rest of mankind led by descendant of Cain, Tubal-Cain (Ray Winstone).

And that’s only scratching the surface of the film’s trippy eccentricity. The story of the ark is familiar to generations of children, and the image of Noah as a jolly bearded fella saving the animals like some sort of nautical Doctor Doolittle is one we all share. Aronofsky remixes this into a more adult mood by reminding us that this bloke was also happy to stand by and watch the rest of mankind drown, and followed the word of God with a fanatical monomania. Noah is, for large chunks of this film, not a nice bloke. As he tells son Shem “He chose me because he knew I would finish the job”. No hugs on this boat.

It makes sense that Noah is embodied by Russell Crowe at his most gritty. Going through a series of haircuts that reflect his journey from nature lover to chosen man of God to fanatical cult leader through to reborn family man, Crowe gives the role a blunt determination and earthiness ­– so much so you half expect him to address everyone as “mate”. But it’s essential for Aronofsky’s reimagining of the role as part environmentalist part cult leader. Noah is uncompromising, unshakeable and totally certain that all his decisions come direct from God, ergo they are unquestionable. As he shows time and time again in the film, he is willing to commit actions that are at best morally questionable, at worst down right bad, to do what needs to be done.

He’s the man who is willing to watch his crapsack world burn (or rather drown) and feel that, yes, it is good. Aronofsky’s vision of this wasteland of a world fits this perfectly. Resources are low, mankind has turned (it is heavily implied) partly cannibal, industry has destroyed nature, the law of man has become the law of the strong. There is a clear modern parallel here with environmentalism, and Noah himself is strongly reimagined as a man with a deep respect for nature – and the balance mankind must make with it; and the danger of us burning through our resources with no regard for the future is a major theme throughout the film.

Evil mankind is represented by Ray Winstone as Tubal-Cain. Greedy, selfish, ambitious and a demagogue, Winstone is at his most physically imposing and dangerous here, a fitting obstacle for this reimagined muscular Noah. Aronofsky does however acknowledge that, for all his faults – and his unashamed embracing of violence – Tubal-Cain does have a point: it’s not fair for all of mankind to be sentenced to oblivion with no chance to save itself, regardless of their personal morality.

This uncomfortable darkness behind the story of Noah – and the destruction of mankind by their creator – is one of many things that made some Christians uncomfortable with the film. The Creator (as he is referred to throughout the film) is noticeable by his silence, speaking only to Noah through dreams and everyone else, not at all. Noah’s hardline interpretation of God’s plans (extinction) is enforced by him with all the obsession of a fanatic (a large chunk of the second half of the film is given over to the danger of an expectant mother sharing a boat with a man who has stated his intention to end the race with his immediate family). Of course the film shows Noah eventually changing his mind (and getting royally pissed in self-disgust at his lack of will), but it’s a way darker tone to take for a story more familiar to people through children’s playsets. 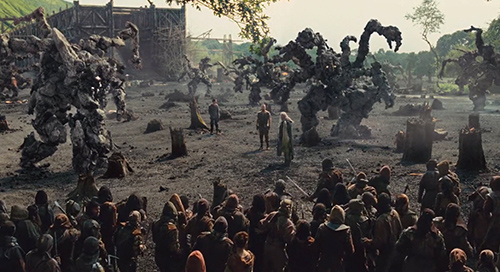 Aronofsky places this film at a hinge point of what sort of race are we. It’s expressed in several scenes that mankind is still fighting the struggle between Cain and Abel. Is it violence and strength that wins out? Or are there better qualities in man that can end the cycle of destruction? What sort of world has man built – and what sort of world does Noah believe could emerge from the floods? Striking imagery accompanies this musing throughout, not least a flashback to Cain killing Abel in silhouette against a blue dappled starry night sky – an image that shifts and changes at one point to replace the brothers with antagonists from our entire history of warfare.

There are miracles and divine power in this film, but its actions seem to be based around inspiring fear and obedience rather than devotion. Forests spring from the ground for Noah to build from. Geysers of water take out mankind. Fires take out armies. There are moments of gentleness – a woman given back her ability to have children, rainbows etc. – but the Creator is a hard taskmaster. Noah is assisted by a gang of fallen angels – the Watchers – who, as punishment for siding with mankind when Adam and Eve were expelled from Eden, were thrown to the ground and encased in stone, turning them into freakish, gangly, giant rock monsters. Despite this, they retain their devotion to their creator – and their assistance is essential for the construction of the ark.

The inclusion of Giant Rock Monsters shows you again how far off the Biblical beaten track Aronofsky goes. This same embracing of unconventional oddness is seen throughout the film’s aesthetic – dirty clothes that have been cobbled together from several different eras, hints of metalwork and industrial ruins throughout Tubal-Cain’s kingdom, blasted wastelands – it’s miles away from The Ten Commandments. But it all sort of works because, regardless of his eccentricity, Aronofsky is a unique and intelligent director of visuals and his work is full of striking images and staging that draws inspirations from all over the shop, from old films to classical children’s story book images from Biblical tales.

Noah ain’t perfect. It’s overlong and its genre defying oddness occasionally feels a little too much. It suffers from the fact that the visuals and themes are so overwhelming that they crush most of the characters: Jennifer Connolly has little to do as Noah’s wife, while Emma Watson et al playing various Noah family members are left with just crusts to chew on. But embrace its bizarreness and the points it wants to make and you are left with a film that is quite unlike anything else you are likely to see. Aronofsky has made a Biblical epic unlike any that has ever, or will ever, be made. And that at least is worth some praise.
Email ThisBlogThis!Share to TwitterShare to FacebookShare to Pinterest
Labels: Anthony Hopkins, Biblical epic, Darren Aronofsky, Douglas Booth, Emma Watson, Frank Langella, Jennifer Connelly, Logan Lerman, Marton Csorkas, Nick Nolte, Ray Winstone, Russell Crowe