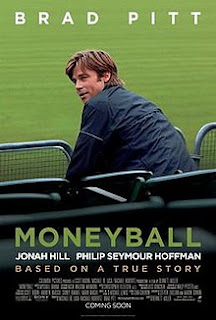 Chances are, if I tell you this is a film (a) about baseball and (b) also about sabermetric economics, I’ll lose a lot of you before a single second of the film has rolled. Which would be a shame in this case, as Moneyball is an entertaining, rather affecting yarn that manages to turn subjects that really feel like they should be impossibly dull into a sprightly against-the-odds drama.

In 2002, Oakland A’s general manager Billy Beane (Brad Pitt) has a problem. The As are struggling to pull together a competitive team for the new season, with their best players having been cherry picked away by the larger (and crucially richer) teams, and the money to buy replacements proving incredibly sparse. But after a chance meeting at the Cleveland Indians with young Harvard economics graduate Peter Brand (Jonah Hill), Beane stumbles across another way of building a team. Realising that if he tries to compete on finances with the bigger teams he will always lose, Beane is persuaded by Brand to research player statistics to unearth players undervalued by the big teams. By focusing on specific playing statistics – crucially their on-base percentage – rather than more showy skills, Beane starts to build a successful team, despite the push-back from the more conservative scouts and coaches at the club.

Yes it’s the backroom side of sports, the boardroom politics and business dealings, that come to the fore in this film. But rather than bore, it actually zings along very effectively due, in no small part, to some cracking trademark rat-a-tat dialogue from Aaron Sorkin (polishing a script by Steven Zallian), which elevates conversations about percentages and statistics into something so entertaining you don’t even notice you barely see any actual playing of baseball.

But then the film comes into shape because who hasn’t wanted to be the visionary, to be the one who tells a stuffy room of old-timers that they are out of date and hell fire I don’t care what you say we’re going to do it the new way or be damned? Based on Michael Lewis’ book, written in heavy collaboration with Billy Beane, the film may well (as some have claimed) play up the conservative prejudices of the follow-your-gut scout and coaches (in particular its portrayal of coach Art Howe as some sort of lumbering dinosaur) but it does make for some damn fine scenes.

And there is a point in there that these coaches feel – perhaps slightly justifiably – that their experience is being disregarded in favour of burying your nose into an online almanac. Crucially, they are proved right (although the film plays it down) when they identify one of the Beane’s signings in advance as a party-hard troublemaker. The film also shows that, while numbers help recruit the players, what actually makes them perform is Beane’s reluctantly taking on the mantle of man-management: talking to the players, explaining what he is doing and motivating them personally. While it’s a film about pushing the boundaries, it also takes moments to show that we can’t junk everything that’s past to build our future.

A lot of this comes out of Beane’s own personality. It’s a gift of a part for Brad Pitt, who is excellent, mining the deep vein of loneliness and isolation in Beane, whose past is littered with regrets and mistakes. His own baseball career flamed out after early promise, due to his inability to adapt to a higher level of play (Brand wins Beane’s trust by telling him that, based on statistics, he would have picked him very late in the draft not first). It’s an experience that gives Beane a ready-made scepticism for “gut instinct”, but also explains his own unwillingness to get to know the players who (if he needs to) he’ll need to trade in an instant for the good of the club.

Pitt gives Beane this inner sadness, but also a level of warmth fired by competitive zeal. He’s unable to watch the games (so driven is he to win) and he treats his negotiations with other teams and managers with the sort of no-holds barred testosterone that you’d expect he played with. He’s a passionate man who loses his temper and has no time for fools. But he has a deep love for his daughter (of course!), keeps on good terms with his ex-wife and understands deep down that making life decisions is based on a lot more than money.

This also adds a level of bravery to his decision to fly in the face of decades of baseball knowledge – get this wrong and his head will be on the block. This brings added tensions to heated discussions with scouts, frenzied phone calls to secure at the right price the most statistically advantageous players, and clashes with coaches about how to pick a team that has been selected for very specific skills. It adds a human element and guts to the drama.

With super dialogue, a fine performance from Brad Pitt and some good supporting work from Jonah Hill as the (semi-fictionalised) numbers-guy slowly building in confidence, Moneyball has more than enough to recommend it. Sure not much concession is made to baseball muggles, but there’s more than enough heart and drama here to overcome the lack of explanation of how baseball works and what these percentages actually mean – the fact is it works.
Email ThisBlogThis!Share to TwitterShare to FacebookShare to Pinterest
Labels: Baseball films, Bennett Miller, Biography, Brad Pitt, Chris Pratt, Jonah Hill, Philip Seymour Hoffman, Robin Wright, Sports films