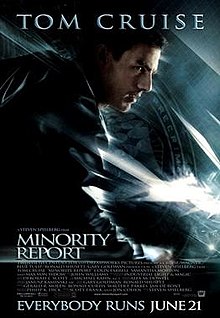 If you could see what lies ahead for you in your future would you change it? Or would you accept what fate has clearly already decided? It’s one of many questions that Minority Report, Spielberg’s bulky, brainy sci-fi chase movie slash film noir, tackles. And the answer it suggests is: everybody runs.

It’s the year 2054, and murder in the District of Columbia is a thing of the past thanks to the Pre-Crime Division. Using three psychics, known as “pre-cogs”, permanently hooked-up to a machine that can visualise their visions of violent deaths and murders that will occur, the Pre-Crime team led by Chief John Anderton (Tom Cruise) arrest and imprison murderers hours, minutes and seconds before they even commit their crimes. Anderton believes passionately in the system – but his belief is shaken when the next murderer to be identified is none other than himself. Anderton is due to kill in a complete stranger in 36 hours – and immediately goes on the run to work out who this man is, why he would wish to kill him, and if there is any truth in the rumour that the pre-cogs don’t always agree, and that the most powerful pre-cog Agatha (Samantha Morton) can produce a “minority report”: an alternative vision that shows a different future.

Spielberg’s film is one that mixes searching discussion on fate, choice and destiny with the pumping, fast-moving action of a chase movie and the gritty, hard-boiled cynicism and intrigue of a classic film-noir. He frames all this in a brilliantly constructed, dystopian future where adverts and government surveillance can read our eyes wherever we go and identify us immediately (throwing personalised ads in the faces of people everywhere they step) and, in the interests of safety, people who have technically not done anything yet are imprisoned for life on the basis of things it has been determined they will do.

It makes for a pretty heady cocktail, and one which will have you questioning how much of what we decide is our choice and how much is destiny. If Anderton knows his destiny, can he change his fate? Will he have the willpower or the ability to avert his destiny? Or does knowing what will happen and where it will take place only drive him towards his fate? Put simply, does knowing the future in advance give you a chance to change or it or does it make that future even more likely (or perhaps even inevitable)? Spielberg’s film delves intelligently into these questions, throwing paradoxes and causality loops at the viewer with a genuine lightness of touch.

This works because the film balances these more philosophical questions with plenty of adventure and excitement. Several chase sequences – which make imaginative use of various pieces of future tech like driverless cars and jet packs – keep you on the edge of your seat. Spielberg tentpoles the film throughout with some brilliant set pieces, from Alderton’s race against the clock to stop a killer at the start to his own escape from the clutches of his former colleagues. 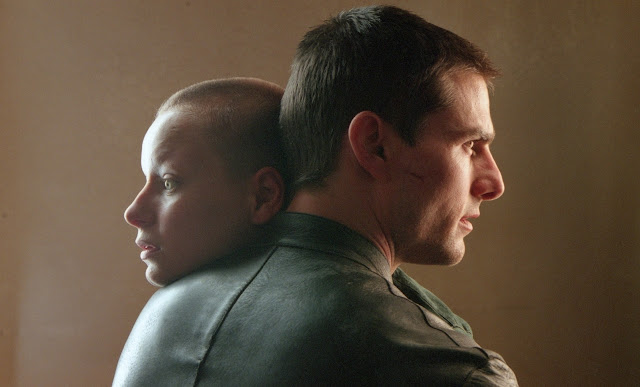 These set pieces also differ in styles. These more conventional action sequences are sandwiched between others that are a mix of darkness, comedy, horror and slapstick. In one sequence, Alderton must attempt to hide in a bath of icy water (Cruise holding his breath of course for a prolonged period on camera) to evade a series of body-heat seeking metallic spiders, with Alderton desperate to protect his freshly replaced eyes from being exposed too soon to daylight. Later, Alderton will evade the cops thanks to the advice of pre-cog Agatha whose simple instructions (Grab an umbrella! Stand still for five seconds behind the balloons! Drop coins for the tramp!) wittily use her fore-knowledge of events to guide Alderton through a gauntlet of perils.

The horror is in there as well from those creepy spiders, not to mention the ickyness of Cruise carrying out an operation to replace his eyes to evade that all-intrusive retinal scanning. The sequence – with Peter Storemare as a sinister doctor who delights in leaving unpleasant tricks for the temporarily blinded Alderton (rotten food and sour milk being the most gross) – is a brilliantly vile, uncomfortable piece of kooky surrealism in the middle of a wild chase. And also tees up the bizarre dark comedy of Cruise – attempting to use his old eyes to break back into his former office – dropping his eyes and desperately chasing them as they roll down a corridor towards a drain.

There are also darker themes in Alderton’s tragic background. Saddled with a drug addiction and a broken home, we learn Alderton is still struggling with the grief of losing a son to kidnappers – a loss he clearly holds himself personally responsible for. Getting tanked up at home and interacting with old home movies of his lost son, Alderton carries within a deep sadness and grief. It’s a challenge that Cruise rises to really well, his ability to bring commitment and depth to pulpy characters perfect for making Alderton a character you really invest in.

It also gives Alderton the tragic backstory and self-destructive problems so beloved of grimy, gumshoe cops of old noir films. That’s certainly also the inspiration for the drained out, greying look of the film that Spielberg shoots, with colours bleached and the future looking a confusing mix of clean, sleek machines and dirty, rain sodden streets. Alderton’s hunting down of his future victim has all the shoe leather and bitterness of classic Chandler. Meanwhile Federal Agent Witwer (a decent performance from Colin Farrell) chases him down with the determination of an obsessed cop, while also showing more than a few of the quirks of the maverick PI himself.

Minority Report is so good in so many places, it’s a shame that the final act so flies off the rails from the tone of what we have seen before, eventually stapling a happy ending onto a film that tonally has been building towards something very different. On a re-watch, there is just enough in the film to allow you to interpret this ending as a sort of fantasy or dream, but you’ll want the film to end the first time it crashes to black (you’ll know the point I mean). I prefer to believe the ending is a sort of dream – although Spielberg drops no hints to this effect in the film visually at all, in the way something like Inception does so well, to leave you questioning reality – because with that thought that final act betrays everything you have seen before in its simplicity and embracing of binary rights and wrongs.

But with that massive caveat, Minority Report is a very impressive film – and for at least the first hour and fifty minutes probably one of Spielberg’s best. It gets lost in the final act – and I know I said this but please let that be a fantasy – but until then this is a brilliant mix of genres and intelligence and Hollywood thrills with Cruise at his best. It’s exciting and its emotionally involving. Ignore that ending and it’s great. When you re-watch it, pretend you can’t see that future.
Email ThisBlogThis!Share to TwitterShare to FacebookShare to Pinterest
Labels: Colin Farrell, Detective story, Film noir, Max von Sydow, Neal McDonough, Peter Stormare, Samantha Morton, Science fiction, Steve Harris, Steven Spielberg, Tim Blake Nelson, Tom Cruise