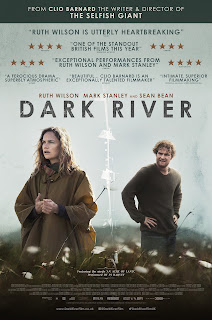 British Independent film can be a grim place. Clio Barnard is undoubtedly a gifted film-maker and visual stylist, and infuses her work with a striking poetic lyricism – but blimey Dark River is hard going. And not just because it’s a grim film about grim subject matter – it’s a film that feels likes it’s trying way too hard at almost every point.

Alice Bell (Ruth Wilson) returns to her family’s farm after 15 years, on the death of her father (Sean Bean). A victim of her father’s continued sexual abuse, Alice finds the farm still haunted by memories – and feels threatened by her violent, depressed brother Joe (Mark Stanley) who resents being left to care for the farm and their dying father alone. Both siblings make legal claims for ownership of the farm – and the dispute and tensions swiftly escalate.

Dark River makes no secret of its historic child abuse plotline. But this narrative development seems to have become so common in grounded, grim dramas like this that it’s hard not to view almost everything you see as a walking cliché. Appalling as Alice’s experience has been, this film doesn’t show us anything that we haven’t seen hundreds of times before in a storyline like this. All the expressions of trauma, the style of shooting, the silent dread – it’s all been done before. It already feels tired here and lacking any form of originality.

It doesn’t help that the film is slow-paced, and determined to create an arty atmosphere. For all the beauty of the gloomy Yorkshire dales and rain-drenched sheep, you can’t help but feel the film is wallowing in all its Bronte inspired poetic grimness. Every second of the film seems to be designed to hammer home the “grim up north” feeling, in an attempt to add an amount of poetic weight to a story that feels slight, predictable and all-too-familiar.

Meanwhile, the central conflict of Alice’s determination to turn the farm around and claim ownership of it never seems to ring true. Every second on the farm she feels uncomfortable and haunted by memories: her brother even says she can’t step foot inside the farm house. Why does she want to stay here? Why does she fight so hard to claim possession of it? It never really makes sense.

The struggle between the siblings feels equally forced, remarkable as the film’s understanding of Joe’s drunken inarticulacy and ill-expressed emotional turmoil can be. The true emotional reasons behind their fury never click, as we never get a sense of any real relationship between them either past or present. For all the haunting, ghost-like presence of Sean Bean as the dead father (who appears as a constant vision or half-memory) that sense of the past, and the unspoken tensions don’t quite click into place, leaving the film reliant on the language of cliché.

The film’s main asset is the extraordinary performances of the lead cast. For all the clichéd and familiar scenes and story structure they encounter, Ruth Wilson and Mark Stanley are both exceptional. Wilson’s Alice is a heartbroken, vulnerable and confused figure only just able to understand the emotional trauma her father has left her with. Mark Stanley matches her as an angry young man, furious at the world, prone to dangerous outbursts, an inarticulate mountain of rage with no direction. The scenes between these two throb with an emotional strength and truth that the rest of the film can hardly match.

Dark River is very well made and striking in its visual language with some very strong performances. But it’s also overly familiar and trying too hard to be both important and artistic. You’ll quickly find yourself drifting away from it as it goes on, admiring it but never truly engaging with it.
Email ThisBlogThis!Share to TwitterShare to FacebookShare to Pinterest
Labels: British Films, Clio Barnard, Family drama, Joe Dempsie, Mark Stanley, Ruth Wilson, Sean Bean