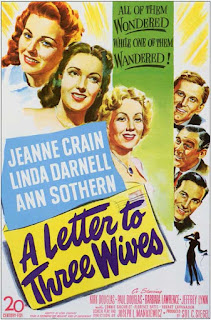 It’s strange to think that, back in 1949, this slight story of three women one of whose husbands might have run off with another woman (the film’s narrator, the omnipresent Addie Ross, coolly voiced by Celeste Holm) was garlanded with multiple Oscars. It’s the sort of material you half expect would make an episode of Desperate Housewives – although of course today the whole thing would have been sorted out in a few minutes with mobile phones (A WhatsApp to Three Wives?). What makes it work so well is Mankiewicz’s dialogue, which lifts this slight melodrama of suburban couples into something that feels like it has more weight and intelligence than it really does.

Anyway, our wives are a mixed bag living in a commuter town “just outside the city”, all from middle-class or lower upper-class backgrounds. Seconds before taking some underprivileged children for a boat trip and picnic, insecure Deborah Bishop (Jeanne Crain), blowsy Lora Mae Hollingsway (Linda Darnell) and ambitious Rita Phipps (Ann Sothern) receive a goodbye letter from their “friend” Addie Ross, who announces she has left town with one of their husbands. But which one? Is it Addie’s ex-boyfriend, privileged Brad Bishop (Jeffrey Lynn), her school-yard sweetheart, academic George (Kirk Douglas), or her admirer, businessman Porter Hollingsway (Paul Douglas)? As the poster says, “While they wondered, one of them wandered”!

If that sounds to you like a rather small-scale storm in a teacup – well you’d probably be right. To be honest, it’s pretty hard to care which of these husbands might have headed into the sunset with the arch Addie Ross, since most of the characters seem at first rather smug, self-centred or tiresome. It takes time to warm up to these guys, but eventually Mankiewicz’s sparkling dialogue starts to work some magic and you invest in a clichéd little story (based, bizarrely, on a glassy magazine short story).

At one point the film was entitled A Letter to Four Wives – until studio executives decided that was one too many (bad news for Anne Baxter who had been cast as the final wife). That speaks to the episodic nature of the film. It has a clear five act structure – the set up, an act establishing the backgrounds of each of the marriages, and a final act that reveals who went where and wrapping the plot up. It’s a simple structure, and today it’s hard to see what all the fuss was about.

Mankiewicz’s framing device for his flashbacks may be a bit contrived, but he puts it together with skill. Each flashback is cleverly introduced with an intriguing device where various mechanical items near the women slowly take on a voice of their own, echoing their inner dread back to them. It sounds a bit odd – and it is at first – but it sort of works as an unsettling reflection of the unease of the central characters.

Once we get into the flashbacks themselves they are a mixed bag. The weakest by far is the first, focusing on Jeannie Crain’s Deborah Bishop. Rather plodding and dated – and forced to also introduce all the characters – it’s a shapeless section of reflection in which Deborah comes across unengaging, sulky, insecure and tiresome. Mind you that’s as nothing compared to her husband Brad, played with utter forgettability by Jeffrey Lynn, who is nothing more than a self-important idiot. Frankly, you end up thinking Deborah might be better off without him. The sequence focuses on the possibility that Brad might think Deborah is a little beneath him – compared to his old love Addie – but basically serves as a teaser for the next two flashbacks and an intro to the more interesting couples we are going to spend time with.

Our second sequence offers several comic highlights as it follows Ann Southern and Kirk Douglas (both very good) as the Phipps, middle-class intellectuals. George is an academic, Rita a writer for radio soaps, and the flashback revolves around their dinner party for Rita’s bosses, two radio-and-advert obsessed moneybags who demand the meal is interrupted so they can listen to episodes of assorted radio shows (accompanied by a long discussion of their advertising slots). Plenty of comic mileage comes out of George’s irritation at their vulgarity, but also serves to demonstrate the tensions in the Phipps marriage – George believes his wife is wasting her talent, Rita thinks her husband isn’t taking her career seriously. But underneath that is a nice little commentary on the insecurity of men returning from the war to find their wives have made professional lives of their own – and in this case, even become the main breadwinner in the household.

Our final flashback is probably the finest, around white-goods factory owner Porter Hollingsway (a bombastic Paul Douglas, with a touch of self-loathing) and his secretary turned wife Lora Mae (Linda Darnell, brassy self-confidence hiding vulnerability). Largely set in Lora Mae’s family home, a house on the wrong end of the tracks which hilariously has a train track running past its window (which at frequent occurrences leads to the whole house shaking, an action the family responds to with a casual familiarity). The drama here revolves around the couple’s feelings for each other – Porter can’t believe Lora Mae isn’t a gold digger, Lora Mae can’t believe her husband genuinely loves her for herself – but it’s told with a real sense of comic vibe laced with emotional truth. It’s the finest – and funniest – sequence and leads to a pay-off that really works.

A Letter to Three Wives maybe a little too soapy and frothy to be much more than an entertainment, but it is at least a very entertaining one. At all times this is due to Mankiewicz’s witty, sparkling and truthful dialogue that hums in every scene and gives all the actors some of the best opportunities of their career. Linda Darnell in particular is outstanding – warm, witty, fragile – but each wife has her moments, and Kirk Douglas is charm itself as George with Paul Douglas’ fragility under the surface eventually quite moving despite his bullying exterior. There is also fine support from Thelma Ritter among others. It’s a fine film, handsomely mounted and offers more than enough laugh-out-loud moments and moments of sweetness to make it really work.
Email ThisBlogThis!Share to TwitterShare to FacebookShare to Pinterest
Labels: Ann Sothern, Celeste Holm, Family drama, Jeanne Crain, Jeffrey Lynn, Joseph L. Mankiewicz, Kirk Douglas, Linda Darnell, Paul Douglas, Thelma Ritter