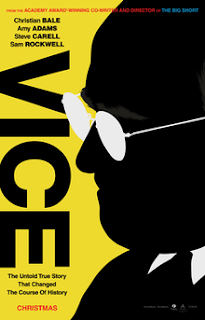 There is a film to be made about the turmoil of the Bush presidency. It’s not this film. Adam McKay’s flashy, clumsy, cartoonish, smug, tedious, overlong, arrogant and polemical film quickly outstays its welcome, drowning any legitimate ideas and theories it has under a wave of high-minded, angry shouting at the viewer, frequently mistaking flash and bombast for actual political insight and producing the sort of heavy-handed, angry political commentary that wouldn’t look out of place in a cheap student review. And flipping heck I’m on the liberal left!

Anyway, the film follows the career of Dick Cheney (Christian Bale under an impressive pile of make-up) from his early wash-out days. Told by his wife Lynne (Amy Adams) to buck his ideas up or lose her, Cheney becomes an intern for Congressman Donald Rumsfeld (Steve Carell), rising through the ranks due to his ruthless efficiency and loyalty, becoming Chief of Staff under Ford and Secretary of Defence under Bush. So he’s a natural choice for the inexperienced George W Bush (Sam Rockwell) to balance the presidential ticket. In return, though, Cheney wants control over a few areas – energy, foreign policy, defence etc. etc. – that the lazy Bush has no interest in overseeing. So a quiet, backroom politician changes the office of the Vice President to become the most powerful man in the world. Boo hiss.

McKay’s intention with this film is to reveal the hollowness, greed and utter lack of integrity in its subject. Well he never lets us forget this aim – I don’t think I’ve ever seen a film that so openly hated its lead character, which so completely refused to see any redeeming qualities in him whatsoever. Christ, even Downfall took a few minutes to show Hitler was generally kind to those who worked for him. The film is so unrelenting in its loathing for Cheney that it starts to feel like a being shouted out for over two hours by an “it’s the end of the world” fanatic on a street corner. This does not make for good entertainment.

The film has no subtlety whatsoever. Not for a single second does it even consider the remote possibility that anyone in the Republican party might, perhaps, just maybe, even if it was only some of the time, believe that they were doing something for a principled reason, even if it was a principle those on the left don’t agree with. Instead, all the characters are shown as selfish, greedy and corrupt, using ideology solely to gain power and then using power only to enrich themselves. It’s the sort of lazy political views that turn people off liberals – the idea that anyone who doesn’t share a liberal viewpoint is by definition evil. Some of us grew out of this kneejerk assumption that everyone who doesn’t agree with us is self-serving and cruel. Not McKay.

On top of which, McKay’s film is made with the overt flash and brio that is the hallmark of the hack director using the tools of cinema with no understanding of their proper use. Wonky camerawork, cutting between timelines, throwing in newsreel footage, breaking the fourth wall, using strange camera angles, chucking in cameo actors to amusingly comment on events (Alfred Molina and Naomi Watts principally) and editing it with flash don’t make you a great director. They make you someone who has seen a lot of films and lot of techniques, but has no understanding of how to use them to craft an overall effect, instead thinking that if you throw all of them at the wall at once, you’ll be a master craftsman.

The film is full of studenty bits of invention that must have seemed oh-so-clever on paper in McKay’s script. Forty minutes in, with Cheney’s career looking over with the end of the Bush presidency, McKay starts running the credits – only to snap back into the film with the fateful phone call from Dubya. It’s clever and raises a quick chuckle, but doesn’t add anything to a sense of turning point in Cheney’s life. It’s followed by a clumsy metaphor of moments being like tea cups balanced on top of each other (inevitably these are later shown tumbling down) to represent how key moments of history build on each other. The real nadir is a moment when Dick and Lynne fall back into cod-Shakespearean dialogue in the bedroom as they discuss a possible vice presidency. ‘We don’t have Shakespeare’s psychologically insightful dialogue’ (I paraphrase) says the voiceover, before this skin-crawling hand-in-mouth sequence that shows McKay knows as much about Shakespeare as he does subtle political commentary. 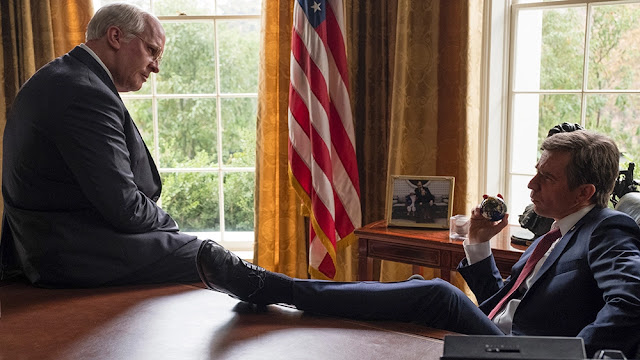 Ah yes the voiceover. Perhaps not knowing how to marshall his childish political points in actual scenes and dialogue, McKay uses a voiceover from Jesse Plemons’ ground-forces marine to spell out as bluntly and crudely as possible the basic and trivial points it wants to make. The damn film already feels like being hectored by a crank, so why not make it feel even more like a polemic by having a character bitterly explain why everything is wicked and evil at you? The narration bores – and joins the general feeling of the rest of the film, that it goes on forever and ever and ever and never, ever, ever says something really interesting or revealing.

The performances are a mixed bag. Bale gives a decent turn as Cheney, capturing his mannerisms and conveying a sense of dark ambition, but it’s a role he could play standing on his head. Amy Adams turns Lynne into a Lady Macbeth, in a reheat of her performance from Paul Thomas Anderson’s The Master. Every other performance is a crude cartoon – Carell’s Rumsfeld a putty-faced joke, Sam Rockwell’s Bush (an impossibly generous Oscar nomination) a cartoonish buffoon. Everyone else coasts through it, patting themselves on the back.

There is an argument to be made that Cheney’s legacy is far from good, and it’s certain that we are paying a heavy price for interventions in Iraq. Many of the policies were less than savoury and left a less than positive benefit. But this film hammers these points home with all the charm of a ranting, drunk politics student who has read one book and watched a lot of YouTube videos. With McKay’s soulless, clumsy, look-at-me direction layered on top, this is a flat out terrible film. Save yourself what feels like much more than its two hour run time. In fact I’ll summarise it for you: CHENEY IS EVIL AND HORRIBLE AND HE (LITERALLY) HAS NO HEART. There you go. You don’t need to see it now.
Email ThisBlogThis!Share to TwitterShare to FacebookShare to Pinterest
Labels: Adam McKay, Alison Pill, Amy Adams, Biography, Christian Bale, Eddie Marsan, Jesse Plemons, Justin Kirk, Lily Rabe, Political dramas, Political satire, Sam Rockwell, Steve Carell, Tyler Perry