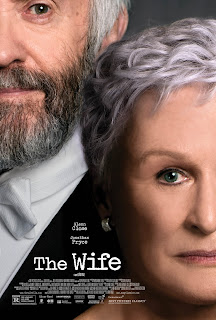 The old cliché used to be: behind every successful man, there’s a woman. The Wife explores just such a woman – and uses this story for a brilliantly structured, tightly written exploration of the tensions and sacrifices that underpin a partnership (and relationship) where the man is the sole public figure. In 1992, Joe Castleman (Jonathan Pryce) is a hugely successful novelist, being honoured with the Nobel Prize for Literature. Standing beside him at all times is his wife Joan (Glenn Close), silent, supportive, taking care of all her husband’s needs. But as her husband is surrounded by praise and flattery, has her patience finally begun to snap?

Much of the attention for The Wife has focused on Glenn Close’s performance as Joan. And while her performance is superb, there is much more to this film than that. This is a well written, brilliantly acted, carefully shot relationship drama that manages to explore interesting details about how sexism, gender expectations and the patriarchy turn some brilliant, intelligent and gifted women into ciphers who must hide their skills under a bushel. The Wife is an engrossing, small scale drama that leaves you with a lot to think about.

Runge’s camera is slow and subtle, carefully zooming into parts of the scene that don’t seem at first to be central, but are revealed to be so. Many of these moments centre around Joan, a woman quietly at the edge of scenes, ignored by people, responding only when required. She calmly follows her husband’s lead, while quietly tending his needs (reminding him of appointments, making sure he takes his medicine, apologising for his abruptness).

This sort of framing requires a lot of quiet, “reaction” acting from Close – and she excels at this. Close’s performance is a masterclass in subtlety, her face a mask of micro-reactions that leave the viewer guessing at all times exactly what she is feeling about all of the events she witnesses. No scene covers this better than when she listens in on the line as her husband is informed of his Nobel prize – her face slowly, carefully, unreadably changes from delight and pride to something far more equivocal, her face frozen in a look of – well is it anger, horror, frustration? It’s impossible to tell. After that, the entire film is a study in interpreting the exact feelings this woman has for the behaviour of, and praise for, her husband. What does she feel about this? What does she really think? How far does loyalty to her husband stretch?

Muck-raking, sensationalist would-be Castleman biographer Nathaniel Bone (a wonderfully sleazy Christian Slater) has a good idea that there is a lot of anger there – and gambles in a series of offers and interjections that Joan’s loyalty only stretches so far. How far is she responsible for the literary success of her husband? Flashbacks carefully woven into the film show in the early sixties the young Joan (played very well by Close’s real life daughter Annie Starke) as a promising literary writer who falls under the influence of her charismatic professor, young Joe (Harry Lloyd a slightly awkward fit as the arrogant bohemian writer). In the boorish, Mad Men-ish 60s, Joan feels her chance of being recognised as a writer in her own right is close to zero – indeed she’s told to forget it altogether by a bitter former alumna of her Ivy League college, played archly by Elizabeth McGovern – so decides hitching her star to Joe, a promising potential author, seems the best option.

But how much of that promise can Joe actively achieve? And how much of a literary as well as a personal partnership is this marriage? And has Joe lost all track of this? It’s easy to overlook how essential Jonathan Pryce is to the success of this film, but his Joe is a wonderful creation, a bombastic, larger-than-life, selfish even slightly childish figure, everyone’s idea of the great artist, living the cliché of constant praise and a series of seductions. Pryce’s Joe is a domineeringly unattractive figure who slowly reveals his own emotional fragility wrapped in dependency – and the scenes with him and Close (that take up much of the movie) first hum with unspoken tensions and then later throb with the cathartic release of these feelings.

Those scenes when they come – and you can tell they’re coming from the start – are fantastic. Close is on the top of her game here, utterly believable as a woman who over the course of a few days slowly begins to question every decision she has ever made in her life. What Close does so brilliantly though is to show the balance, the lack of certainty, the mixed feelings she has – that people who in some way infuriate her, also provoke great love in her. Pryce is just as fabulous as her equally aggrieved husband. There are moments in these late scenes that tip into melodrama and cliché – but the general thrust of the scenes is so strong, you feel it gets away with it.

Runge has directed a marvellous low-key piece of work that feels like it would make an excellent play. It raises questions on the place of women in the 20th century – and the film’s setting is crucial, as a Joan growing up 10 years later might well have had a very different life – and the film has a brilliant eye for the everyday sexism and patronising assumptions made by people about the wives of ‘great men’. Powered with two brilliant central performances, this film deserves to be seen as something much more than just Close’s vehicle to possible (but sadly not to be) Oscar glory.
Email ThisBlogThis!Share to TwitterShare to FacebookShare to Pinterest
Labels: Annie Starke, Björn Runge, Christian Slater, Elizabeth McGovern, Glenn Close, Harry Lloyd, Jonathan Pryce, Max Irons, Social issues