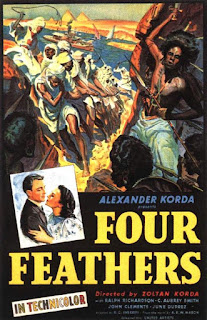 Who doesn’t love a sweeping boys own adventure? The Four Feathers is a prime example of a classic late Victorian adventure story by AEW Mason, where stiff-upper lipped British men do what must be done for honour, Queen and country in the face of hordes of dangerous ruthless natives. Okay, you can see typing that why some of these attitudes can be seen as “troubling today” – and the film’s occasional non-PC stumbles (John Laurie blacks up – as does every other actor playing a speaking African – as radical leader Khalifa, while his army is referred to by an on-screen caption as “fuzzy-wuzzies”). But it’s a product of its time, and its attitudes are really less racist, than the sort of patronising parental colonialism, where the Khalifa has to be stopped as much because he is a danger to his fellow natives as he is the British rulers.

Anyway, putting it’s “of its time” attitudes to one side, The Four Feathers is an endearing, enjoyable and wonderfully made adventure story. After the death of General Gordon (see Charlton Heston’s epic Khartoum) in 1885, war is declared on the Khalifa in the Sudan. However young Harry Faversham (John Clements) resigns his commission on the day of the announcement that his regiment will be shipped out, feeling his obligation to join the army has ended with his father’s death and worried that he will prove a coward. His friends Durrance (Ralph Richardson), Willoughby (Jack Allen), Burroughs (Donald Gray) and fiancée Ethne Burroughs (June Duprez) are singularly unimpressed and all send him white feathers of cowardice. Realising he has led down everyone, Faversham disguises himself as mute, Sangali native (including facial brand – ouch!) and heads out to the Sudan to help his friends and regain his honour: and do they need it, as Durrance is blinded and Willoughby and Burroughs captured by the Khalifa.

The Four Feathers was shot on a huge budget at the time, with extensive on-set location shooting, and it barrels along with an old-fashioned sense of adventure that is hard not to get a little bit swept in. Of course, it’s also easy to question some of the film’s colonialist, white-man’s burden attitudes and also its opinions on what constitutes bravery and nobility (leaving the army because you never wanted to be in it in the first place is seen as yellow-bellied nonsense, which I suppose makes sense for a film made just before World War Two).

But take it as a product of its own time, and the film works extremely well – easily the best version of the many that have been made of AEW Mason’s book. While epic, it gives us a low-key, dignified lead character who it’s easy to admire and relate to. John Clements plays the role with an expected upper-class stiffness in places, but he’s also a man bursting with desires to be something more than a soldier, then plagued with guilt and self-loathing when he believes he has betrayed all those he is closest to. Clements’ performance anchors the film extremely well, and makes Faversham into an admirable, very human protagonist, pushing himself to insane levels of deprivation and suffering to redeem himself in his own eyes, as much as in his friends.

Those friends are also not painted as arrogant buffoons or cruel, knee-jerk bullies. Ralph Richardson mines a great deal of sympathy from Durrance, a man determined to do his best but (its implied ) living under a deep sense of inadequacy and fear himself, who knows he is second best in most things, especially in love, and who accepts the ill fortunes that befall him with an eventual stoic good-nature. The film’s most successful sequence, features a wordless disguised Faversham, guiding the blind Durrance not only back to the British troops, but also helping him to find some will to carry on living. Its sterling work from Richardson, and his physical intelligence – his initial blindness is almost comically blundering, before the character trains himself to move and act almost as if he still had his sight – makes for further emotional connection.

All this is set in a sweeping, marvellously entertaining, grand-scale by Zoltan Korda. No expense was clearly spared, and the large scale sequences of battles and attacks – as well as the shots of armies moving across the desert wasteland – carry a great deal of scale and impact. The film barrels along with an impressive force, throwing events and actions at us throughout, all while juggling the personal stories of its lead characters. The technicolour shooting of the film has a classic gorgeousness about it, and the film has more than its fair share of decent lines. The film highlights a number of rather stirring battle set pieces, as red coated Englishman fight against overwhelming odds, the sort of thing that we are meant to frown at today but actually remains rather gripping.

The Four Feathers may be dated in places, but as a piece of classic entertainment from its era it’s hard to beat. The action adventure is full of bangs, shots and stiff-upper lipped Brits overcoming trials and tribulations. Faversham is a grounded and relatable character, and his doubts and fears make him admirable, not least because of the great lengths he goes to in order to overcome them. The Four Feathers still entertains today because it feels like exactly the sort of classic Sunday afternoon adventure story that appeals to boys of all ages.
Email ThisBlogThis!Share to TwitterShare to FacebookShare to Pinterest
Labels: Action Films, Adventure films, British Films, C Aubrey Smith, Jane Duprez, John Clements, John Laurie, Ralph Richardson, War film, Zoltan Korda