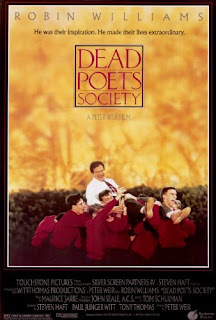 “Oh Captain, My Captain!” Your feelings for Dead Poet’s Society are probably directly linked to how you react to that desk-standing ending. A triumph of emotional film-making? Or garishly over-sentimentalised nonsense? I’ll go for the latter myself, as I found myself non-plussed and unengaged with this conventional “idealistic teacher changes lives of young boys” story. Seen it all before.

In 1959 at elite, all-male prep school Welton Academy, four young students (Robert Sean Leonard, Ethan Hawke, Josh Charles and Gale Hansen) are surprised by the unorthodox teaching methods of their new English teacher, Welton Academy old boy John Keating (Robin Williams). Rather than teach the stuffy, facts based curriculum, Keating encourages the boy to use their hearts and minds, to be creative and above all to carpe diem as much as they can. The boys start an illicit poetry club (?) and begin to explore their own artistic leanings – but their conservative parents and school won’t stand for this challenge of the orthodox and when tragedy strikes it’s Keating who gets the blame.

Dead Poet’s Society already feels a bit dated, and it’s story line treads all too familiar ground of fusty seniors struggling to understand the artistic stirrings of the youngsters inspired by the sort of maverick inspirational teacher that everyone at one time or another has dreamed of being. Naturally of course (as per the rules of films) all the other teachers are either cynical, disinterested or box tickers. For a genuine artist like Weir, I was struck by how plodding this film was in its story and construction and also its ideas and themes. It’s a struggle between generations played out at a point in history where the cultural revolution of the sixties was just about to happen. These ideas were already over twenty five years old when the film was made – and this adds nothing really too the mix.

Instead we get the standard tropes we might expect, as the students play out expected and predictable plots. Nervy Ethan Hawke, at first too shy to speak, finds the courage to express himself. Josh Charles sets out to woo the girl he loves (at times this is more than a little creepy). Proto-rebel (and no doubt soon to be sixties activist) Gale Hansen begins bucking authority and writing scurrilous articles for the School newspaper. And Robert Sean Leonard begins to defy his domineering father’s wishes to focus solely and exclusively on a medical career by landing the part of Puck in a local play and dreaming of a career in the theatre.

Despite the focus of much of the film’s promotion (and in people’s memories) on Robin Williams’ central performance, the story line is all about these boys. And I will say there are some fine performances from these four principles – three of whom went on to have notable careers. Particularly fine is Robert Sean Leonard, who gets a meaty pile to play with as a young adolescent who lacks the courage to tell his father what he really feels and carries all this with a confidence and assurance (even though his Puck performance is hardly the work of genius the film insists it is!).

It’s unfortunate that most of what they do is the totally expected collection of school yard clichés, which builds towards an inevitable and predictable, sad, sentimental, ending. Keating is the standard inspirational teacher, given to flights of fancy and eccentric touches (tearing pages from books, leading the boys in sports designed to build their poetry skills, encouraging the boys skilfully to recite their own poetry) that will either leave you wishing you had him as a teacher or leave you cold.

Watching it now, and seeing Keating interact with his students, you can’t help but feel his increasing closeness with the boys, his encouraging them to call him “Captain” (in one skincrawling moment he doesn’t even turn around when walking until one of them addresses him as this!), his taking them to plays, his obvious favouring of a few key students would all contribute to him struggling to get CRB cleared. I actually found his character rather grating, although the film does use a good few moments to underline how Keating rebukes the boys for their more thoughtless and pointless acts of rebellion and how he urges Neil to gain the support of his father before acting.

Nothing particularly wrong with Robin Williams performance though, even though the thing you feel impressed people the most was this most energetic of funny men restraining himself in a relatively straight and low-key part. It’s a role several actors could have taken on just as well, but Williams does a sound job.

It’s a shame that the film itself is so deeply bland. Its later sentimental touches become increasingly heavy handed and overbearing, and it’s parable of betrayal and corruption in a 1950s school hits its points equally hard. There is nothing really fresh or unique here, and the film itself never brings its story to life in a way that feels fresh or unique. It’s a film widely loved, but to be honest for the uninitiated has more than enough moments of weakness for you to want to check out of this class.
Email ThisBlogThis!Share to TwitterShare to FacebookShare to Pinterest
Labels: Ethan Hawke, Josh Charles, Peter Weir, Robert Sean Leonard, Robin Williams, School drama