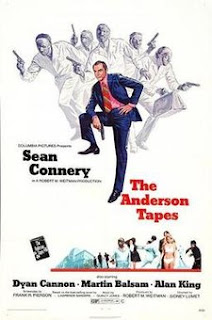 Everywhere we go now we kind of know that we are being watched. There are cameras everywhere. Satellite links build into our cars. Heck we all carry everywhere we go a portable tracking and recording device that can be listened into. So the idea of surveillance being ever present wouldn’t be a surprise to us. But in 1971, the idea that the government could be listening all the time, at any time was something that couldn’t cross anyone’s mind.

It certainly doesn’t occur to John “Duke” Anderson (Sean Connery) just out of chokey after a ten year stretch. He’s back into a world he hardly understands, but it doesn’t take longer than five minutes in the swanky apartment block of his girlfriend Ingrid (Dyan Cannon) for him to case the joint and plan to do it over – all the apartments at once. Putting a crew together, Duke plans to clean out all the whole block of all its valuable property in one go, with financial backing from the Mafia (who owe him for unspecified reasons). Problem is, Duke’s entire plan is being recorded and monitored by different government agencies from top to bottom who – even if they aren’t speaking to each other – are in position to wreck his plans the instant anyone puts the clues together…

The Anderson Tapes is part crime thriller, part black comedy caper. It generally plays it pretty light – with flashes of violence or danger – and throws in some satire on the surveillance age. The tapes in question are different levels of surveillance at every location Duke seems to stop at. His time in the apartment is recorded by a PI following his girlfriend. The feds bugging his mafia contacts. Most of his criminal gang are being watched by the cops. All this recording creates a load of trees which block the view of the forest. Not one of these agencies thinks about joining up their thinking, meaning the actual robbery comes as a complete surprise to all of them. It’s a neat satirical mark on the incompetence of administrative led organisations – when the robbery is finally being reported by a ham radio operator, the news almost doesn’t get through because of a refusal by the 911 operator to transfer a call without an agreement on who will pay the charges for the call.

In all this surveillance Duke is like a romantic hangover from a by-gone time. As played by Sean Connery he’s a romantic figure, like some sort of working-class Raffles, living by the principles of a gentleman thief. He abhors violence, gets on well with all races and creeds, respects his victims and protects them (so long as they don’t get in his way) and runs operations designed to be clean, quick and painless. He justifies his thievery with talk of how most of the property he nicks is just sitting pointlessly in safes, that the insurance will pay out and that in a way he’s giving a bit of excitement to bored middle-class people. Connery is rather good in this role, channelling this rogueishness and expertly maintaining Lumet’s light tone.

Lumet’s direction is competent, professional and assured. Lumet did not hold the film in high regard – it was one he did “for the money” – but he expertly constructs the film, keeps it tight and brings more than enough intriguing directorial flourishes to it. The action frequently pauses in the criminals conversation for a jump cut to the feds listening to the recordings, having paused the recordings themselves (the paused action even uses voiceover from the feds asking for confirmation of who they are listening to). Later, Lumet uses a similar device in the robbery interjecting flash forwards to the people in the apartment bloc being interviewed on site by the police, commenting on events we have often just seen while the aftermath plays out behind them, that throws in plenty of narrative curve balls and misdirects as the action pans out.

The film is dated in places. Quincy Jones’ score often uses a jarring series of electronic beeps that are meant to echo the surveillance of the piece, but actually sounds impossibly dated and jarring. An opening monologue of Connery on the thrill of safe cracking uncomfortably sounds like he is comparing it to non-consensual sex, Martin Balsam’s gang member is an impossibly limp-wristed antiques expert (although he is immediately believable as someone who wouldn’t be questioned surveying apartments for architectural improvements while he is actually casing the joint). There are other moments – but the film gets by because it never leans too hard on any of these attitudes. Indeed the apartment concierge, is depicted as inflatteringly racist and homophobic, in stark contrast to the multi-ethnic, un-prejudiced gang carrying out the robbery.

The Anderson Tapes is an enjoyable, is very 1970s, piece of work that has more than enough to entertain you. It has a clever structure and makes some sound points on surveillance which probably make it more relevant today than it even was then. Connery is very good in the lead role and there is some excellent support (Christopher Walken is strikingly charismatic in one of his first roles). It’s not in the first rank of its director’s film, but it’s still a very fine caper thriller.
Email ThisBlogThis!Share to TwitterShare to FacebookShare to Pinterest
Labels: Alan King, Christopher Walken, Crime drama, Dyan Cannon, Martin Balsam, Ralph Meeker, Sean Connery, Sidney Lumet