The history of the Tudors has been mined so often by film and theatre that there can hardly be any hidden stories left to tell, barely any twists that can be unveiled or reimaginings that haven’t already been imagined. Mary Queen of Scots certainly fails to find any new angles on its oh-so-familiar tale, and even its attempt to rework events and characters keeps banging its head on those damn, unchangeable real events that spoil the story it seems to want to tell.

And it’s a familiar story. Mary (Saoirse Ronan) returns to Scotland from France after the death of her husband. Naturally many people aren’t keen to see this Queen, not least her half-brother the Earl of Moray (James McArdle) who was running the country, and protestant firebrand anti-feminist John Knox (David Tennant). But Mary is plugged in, sharp and savvy and she’s going to rule the country her way – and also put forward her claim for the throne of England currently held by her cousin Elizabeth I (Margot Robbie). It seems all is set for Mary’s success – until fortune begins to turn with her marriage to drunken playboy Henry Darnley (Jack Lowden). Conspiracy, murder, exile and execution are on the cards.

Mary Queen of Scots is a mess. For starters, Beau Willmon’s script does the near impossible of turning one of the most electric periods of British history into something stodgy, dull and hard to follow. Perhaps wrapped up in his House of Cards background, a show where there is a never ending stream of betrayals, counter crosses and twists for twists’ sake, Mary Queen of Scots is the same. The film is a constant parade of betrayals in Scotland, as lords shift and move sides from scene to scene with such swiftness, such lack of explanation, such lack of exploration of character and motivation, that you end up not only confused by ceasing to care. Decent actors like James McArdle and Ian Hart struggle through with ciphers (Hart literally changes sides every single scene). Martin Compston is given a confused character design as Bothwell that makes Mary’s third husband a hero until he makes a left-field heel reversal and becomes a bullying rapist. What a mess. 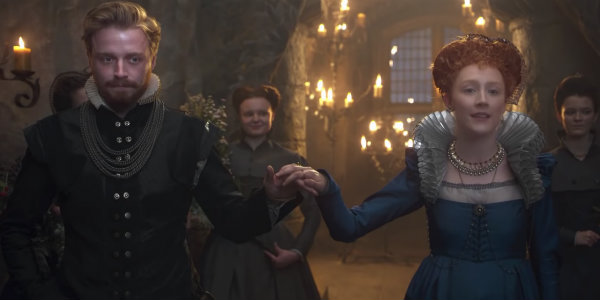 It’s even worse in England, where poor Guy Pearce’s every scene is a never-ending stream of exposition and historical context. Every single scene in England at the court drags and claws itself into nothingness, simply a load of dry, dense, uninvolving dialogue with characters whom we are never given any real reason to invest in. Just as the Scottish lords are ciphers who do whatever the plot requires them to do, with no time invested in developing their characters, so it’s the case with the English lords. There are many, many, many people to keep on top of but virtually no characters to invest in.

Willmon’s script also falls wildly in love with Mary herself, desperate to turn her into some genius politician and master of realpolitik, who we are frequently told is playing the game of courtly politics with aplomb and genius. “She’s out-manoeuvred us” one character constantly bemoans. However, the problem Willman has is that he eventually has to deal with the fact that the real life Mary made hideous, disastrous, stupid decisions. And since those decisions are basically the building blocks of the story (who she marries, who she trusts, who dies, where she goes, who she abandons etc etc.), there is no way around them. You are left with a film that tells you all the time how smart your lead character is, while most of the things she does are foolish.

Not least the marriage to Lord Darnley. Jack Lowdon gives a very good performance as a feckless, arrogant weakling. But surely only the densest woman alive could fail to see that Darnley is a hideously inappropriate husband? The film gets round this by stressing his charm and, in one hilariously misjudged scene, his intense skill at cunnilingus as being the thing that pulls the wool over her eyes. (After this first soft focus bit of oral play, Mary bashfully asks Darnley if he would like some “satisfaction” as well. No that’s fine he sweetly says – she really should be suspicious by then.) The film tries to course-correct by having Mary realise literally five minutes into the marriage that she has made a terrible mistake. But she doesn’t learn from it, as the rest of her life is a series of disastrous decisions, promoting the wrong people, snubbing others, leaving her son (the SINGLE MOST IMPORTANT PERSON IN THE COUNTRY) behind when she runs away… need I go on.

As well as trying to make Mary a genius, it also balances by trying to make Elizabeth an idiot. I swear there is not a single scene in this film where Elizabeth is not in tears about something. She shows no judgement whatsoever, struggles with her hormones, blindly follows the advice of her counsellors, spends half the movie making paper roses and stroking horses rather than running the kingdom. On top of which, this film which wants to make a point about the sexism women face dealing with a world of men, turns Elizabeth (the greatest queen England ever had) into a hormonal idiot, blindly led by men and obsessed with the idea of having children (even longingly trying to make her shadow appear pregnant) because, you know, deep down the ladies just be wanting babies.

Now Saoirse Ronan and Margot Robbie do decent jobs with the versions of these people they play, even if none of this rings true. Josie Rorke does a decent job directing the film visually, with its Game of Thrones inspired look and feel (Edinburgh castle is turned into some sort of bizarre Dragonstone structure, half hewn out of a mountain). But its story is, to put it bluntly, really, really BORING. You are never given any reason to care about most of these characters, so the constant stream of betrayals and side shifting eventually becomes utterly unengaging. Every time you get near to thinking Mary is smart, she has to do a terribly dumb historically inspired real event, that actually makes her look even more stupid than she was. Mary Queen of Scots is a stodgy, dense, dull mess of a film that ends up being drier and less interesting than the sort of high-Hollywood epics from the 1970s it’s trying to update.
Email ThisBlogThis!Share to TwitterShare to FacebookShare to Pinterest
Labels: Adrian Lester, Brendan Coyle, David Tennant, Gemma Chan, Guy Pearce, Ian Hart, Jack Lowden, James McArdle, Joe Alwyn, Josie Rourke, Margot Robbie, Martin Compston, Saoirse Ronan, Simon Russell Beale, Tudor history