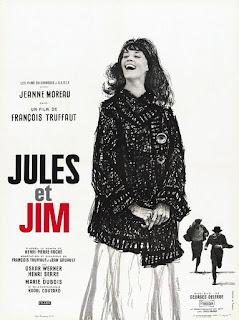 Of all the films of the French New Wave, Jules et Jim was the one that really captured the global imagination. Its success rode came not only from its embracing of the new French style, but also from the way it captured some of the mood starting to build across the world in the 1960s. Truffaut’s third film, it turned its then 29-year-old director into one of the most renowned directors in the world. Filmed with verve and imagination, it still holds up brilliantly today as well.

In Paris in the years before the First World War, French bohemian Jim (Henri Serre) and shy Austrian writer Jules (Oskar Werner) become best friends. They share everything – the arts, sport and occasionally women – and the bond between them is unshakeable. When both men meet Catherine (Jeanne Moreau), a free-spirited, extremely bohemian young woman, they both fall in love – although the infatuated Jules is the first to admit it. Both men fight for their countries in the Great War and return to civilian life: Jules marries Catherine and they have a daughter. But home life cannot keep Catherine bound down, and a visit to Jim throws the three of them into a curious but warm menage-a-trois. But can such bliss last forever?

Truffaut’s film is playful, vibrant and overflowing with style. While other French New Wave films prior to this had focused on sending the camera out into the streets and capturing the lives of everyday Parisians, Truffaut’s film mixes this with period trappings. Utilising the dynamic camera work of his peers, Truffaut throws in carefully selected newsreel footage and still photography. But all this material is edited with modern forcefulness, Truffaut using a range of freeze frames, wipes, dolly shots and several other editing and camera tricks to make this period story feel astonishingly fresh. The film is fast paced and brilliantly made, and Truffaut’s camera roves like an engaged but playful observer – a feeling added to by the use of a subtly wry narration.

According to legend, Truffaut found a copy of Henri-Pierre Roché’s semi-autobiographical novel in a charity bin and fell hard for the book. It’s a mark of Truffaut’s ability to judge the time he lived in, that he saw how clearly this story of bohemian free love in the 1920s would speak so strongly to the atmosphere of the 1960s. It’s a story that feels more dated today – and at times it’s hard not to feel a little bit annoyed by the very knowing, arty, exhibitionism of its characters, and the way they are very consciously living life as a performance – but it chimed like a bell back then. And the slight air of artificiality about many of the characters throughout gives even more of a jar of real emotion when they respond naturally to tragic and upsetting events.

Truffaut’s film – blessed with a simply sublime score from Georges Delerue, which captures the tone of the film perfectly – becomes a brilliant exploration of the freedom and imprisonment that comes from living your life for every new experience, and never settling. All three of the characters, to various degrees, refuse to settle for convention but are constantly striving for a marvellous new experience. Even the character least affected by these feelings, the more sensitive and weaker Jules, is willing to adapt and change his life constantly just so he can remain part of this circle and keep Catherine (with whom he is besotted) in his life. 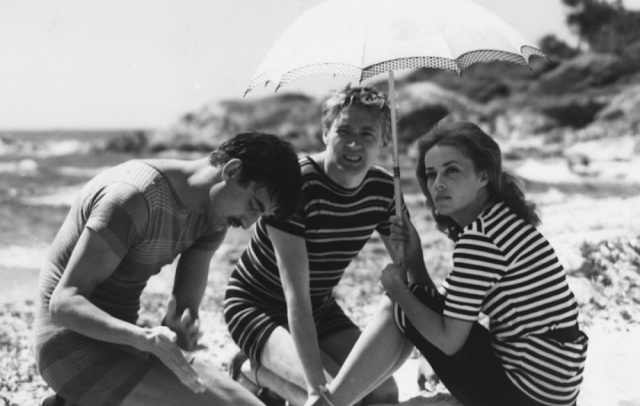 Ah yes Catherine. Jeanne Moreau gives the sort of performance here that seems to define an entire generation. Again, today, Catherine’s constant striving for new experiences and addiction to the buzz of infatuation comes across at times as (to be honest) selfish. But she is also an electric figure, overflowing with life and joie-de-vivre. Moreau’s every scene is breathtakingly eye-catching – and Truffaut recognises this with carefully timed freeze-frames where the camera seems to soak in her beauty and dynamism as much as Jules and Jim. Moreau’s performance is truly iconic, like a force of nature, almost impossible to categorise – she is loving, selfish, brave, scared, flirtatious, bashful – and impossible to repeat.

It’s also clear why someone as unpredictable and all-consuming as Catherine gains the ever-lasting devotion of two close friends. Truffaut brilliantly captures both the hopeless devotion of these two men to this woman, and also the slight tinge of unspoken sexual bond between each other. Both men delight early in the film in each other’s permanent company, of this fact being recognised by all, and write each other poetry and stories. The film implies the fascination and longing both men have for Catherine, but also suggests that the strongest, most lasting bond is the one between the two men. Perhaps it is this that makes them so willing to settling into their menage – and certainly why, as Catherine’s interest in first one then the other waxes and wanes, it is each other’s company that they start to long for.

Of course that doesn’t mean that Jules doesn’t stay devoted to Catherine, a woman who gives him days of sunshine mixed with weeks of polite warmth. Oskar Werner is brilliantly sweet, gently naïve and vulnerable as Jules, filled with wit and tenderness but one of life’s passengers. He’s a man who follows rather than leads, or moves between the two other people in his life following the lead of first one or the other. The stronger willed Jim, played with a hardness and worldly realism by Henri Serre, is the one who both has the strength of character to hold Catherine longer and the will to turn away from her (even if for a short time).

The first half of the film is a marvellous explosion of relaxed joy, of pre-war innocence and youthful exuberance. It’s truly a young person’s film – and Truffaut’s  dynamic filming, inventive framing and giddy editing really captures this – and the film progresses much as life does into a middle age still clinging to the freedom of youth (like Europe attempting to recapture the innocence before the Great War) before beginning the descent towards the horrors to come of the 1930s. The film’s tragic conclusion has the sadness of a world lost, touched with the ridiculousness that seems inevitable for its exhibitionist characters. It makes for a marvellous and breathtakingly giddy ride, that (even if it looks at time dated in its very 1960s vibe) still carries a great deal of delight, joy and above all fun. Truffaut’s greatest achievement and most famous film still makes for a quite a calling card.
Email ThisBlogThis!Share to TwitterShare to FacebookShare to Pinterest
Labels: François Truffaut, French cinema, Henri Serre, Jeanne Moreau, Marie Dubois, Oskar Werner