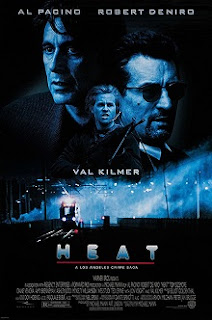 In the mid-90s, Heat was the cinematic event of the year. De Niro! Pacino! Together! In one scene! The two acting heavyweights – wildly proclaimed and popular since the 1970s – had of course made The Godfather Part II together but had shared no scenes. Here, however, we’d see them both at the same time riffing off each other. The great thing is that there is so much more to Heat than just that one scene. Heat is a sort of poetic cops and robbers flick, part stunning action adventure, part profound exploration of the internal souls of men chasing down leads, both good and bad.

Neil McCauley (Robert De Niro) is a skilled career criminal who lives his life with a monastic self-denial, saying you can have nothing in your life “that you cannot walk out on in 30 seconds flat if you spot the heat around the corner”. Vincent Hanna (Al Pacino) is a bombastic, egotistical, workaholic detective with a self-destructive family life. Naturally, these two men find themselves on opposite sides, as McCauley plans his next job and Hanna works to stop him. But the men, with their similar codes dedicated to their chosen career, find that they have an increasing mutual respect – not that that will stop either of them “putting the other one down” if push comes to shove.

Heat is the pinnacle of Michael Mann’s career, and his most triumphant exploration of the conflicted, complex, masculine personalities at the heart of the high-adrenalin worlds of crime and police work. Mann has a gift for giving the simple rush and tumble of cops and robbers a sort of epic poetry, like a metropolitan Beowulf, and he achieves this again here. Heat is a film that throbs with meaning, it's cool blue lensing and chilly, modern architecture serving as a perfect counterpoint to the cool, professional and focused personalities of its characters.

Heat also goes the extra mile by building this playground confrontation into a mythic battle of wills, a battle of principles and ways of living that seem separated only by a few degrees. Mann invests this with such sweep, such grandiosity (without pomposity), such scale that it becomes a sort of modern epic, a film where intense meaning can be mined by the viewer from every scene. Whether there is in fact any meaning there – avoid listening to Mann’s commentary which drills down so many of his elliptical character beats and open-ended scenes into the dullest, most predictable tropes that he had in mind while filming – is another issue, but Mann’s trick as always with his best work is to make something really quite small and everyday seem like a grand, timeless epic. 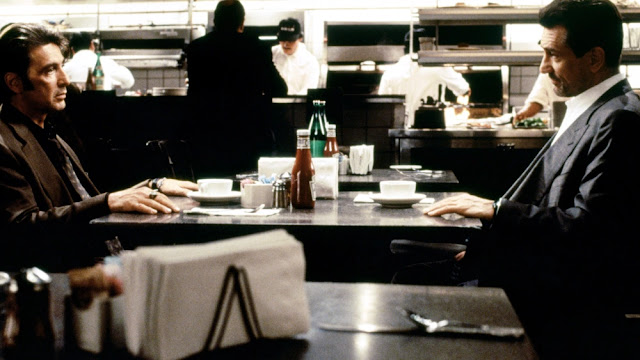 It all boils down to that famous coffee shop scene, where De Niro and Pacino for a few magic moments come together. It’s a scene that explicitly asks us to see cop and criminal and understand that there is in many ways very little to choose between them. It hinges on the gentle competitiveness of the actors, and the way they subtly play off each other. It also plays on our own histories of these two actors, of decades of seeing them as two sides of the same coin, both carrying so much cultural baggage for a string of iconic roles that saw them rule Hollywood for over a decade. It’s the sort of scene given extra investment, where you sense the mutual respect of the actors fuelling the strange bond that powers the scene.

It’s also the one scene of the film that Pacino underplays in. The rest of the film he goes way bigger, powering through each scene with an explosion of shouting and drama. It’s a performance ripe for parody, with more than an edge of ham, but it just about works. Pacino turns Hanna (hilariously the character shares a name with a BBC political journalist of the 1980s) into the purest form of adrenalin junkie, a larger-than-life personality who tears through people and cases with a focused determination that allows no room for a personal life. De Niro downplays far more by contrast, apeing a sort of 1940s noir cool, a monkish insularity that prevents anyone from getting close to him, mixed with a laser-guided determination to do whatever it takes to make his score.

Mann’s film throws these two characters into a series of stunning set pieces with the bank robbery at the centre (“the one last score” that McCauley can’t pass up no matter the danger). The robbery – and the shoot out that follows it – is a triumph of action cinema, brilliantly shot and edited. The gun play is stunning, with Andy McNab having served as a consultant for the actors on the use of automatic weapons. The scene rips through the screen, spewing bullets all over the place in a ruthless, no-onlooker-spared rampage that also really pushes the limits of effective sound design. That’s just the highlight of several scenes that – with guns or otherwise – hum with tension, danger and excitement.

Mann also has enough room in this film though to skilfully establish a number of supporting characters with compelling story lines of their own. Val Kilmer is a tad wooden as McCauley’s number two, but his storyline of troubled marriage is mined for unexpecting pathos (thanks also to Ashley Judd’s fine work as his wife). Kevin Gage is very good as a psychopathic criminal unwisely brought on board to fill a slot in an early robbery. Dennis Haysbert has his own tragic plotline as a criminal trying to turn straight. Diane Venora is excellent as Hanna’s neglected wife, as is Portman as his vulnerable daughter-in-law. This isn’t to mention excellent performances from a rogues gallery of character actors, from Jon Voight to William Fichtner.

Mann keeps all these plotlines perfectly balanced in a film that is very long but never drags for a minute. Crammed with exciting set pieces and brilliant sequences, it’s a film that manages to feel like it is about a very masculine crisis – the failures of men to balance the personal and their career, selfishly harming those around them because of their addiction to action. Mann’s film looks brilliantly at the essential emptiness and sadness this leads to – as well as the blinkered drive that never prevents men from stopping for a second and changing their lives, no matter how many reflective cups of coffee they have. Mann partners this existential, poetic feeling drama with the ultimate crash-bang cops and robbers and thriller, which will leave you on the edge of your seat no matter how many times you see it. Quite some film.
Email ThisBlogThis!Share to TwitterShare to FacebookShare to Pinterest
Labels: Al Pacino, Ashley Jedd, Crime drama, Dennis Haysbert, Diane Venora, Jon Voight, Michael Mann, Mykelti Williamson, Natalie Portman, Robert De Niro, Ted Levine, Tom Sizemore, Val Kilmer, Wes Studi, William Fichtner