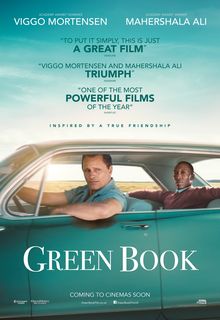 So here we are with a film that might as well be called Driving Dr Shirley. A gentle, ambling, Sunday-afternoon piece of film-making with a rudimentary message, a simplistic world-view and two very good performances at its heart doing all the lifting. Twenty years ago this would have swept the Oscars. As it is it had to settle for just three, including Best Picture, an award that already feels like a triumph of comfortable mediocrity, especially considering Spike Lee’s striking BlacKkKlansman takes such a profound and challenging view of the same issues.

Set in 1962, Green Book follows the “true-life” (heavily disputed by Shirley’s family) friendship between virtuoso classical pianist Don Shirley (Mahershala Ali) and the Italian American Copocabana bouncer Frank “Tony Lip” Vallelonga (Viggo Mortensen) he hires to be his driver for a tour around the deeply racist Deep South states. Can two such different people, over the course of a road trip, find they have more in common they think? You betcha.

Green Book is practically the definition of unchallenging viewing. It tells a lovely, gentle story about two lovely people who, while dealing with the problems of racism in 1960s America, basically have a lovely time bar a few scraps. The film coasts through with a Edward Hopperish nostalgia-tinged views of 60s America peppered with a dash of racist unpleasantness from the people they meet along the way. All this is told with an anecdotal casualness – you can totally tell that the film was inspired by Tony Lip’s son wanting to turn his Dad’s old stories into a film.

And he creates a film where Tony Lip is the hero, and the world of the racist South only truly comes into focus through this white man witnessing the prejudice his black friend must endure (with dignity). While it’s good to have an anti-racist film – however much this film largely focuses on the genteel, country club racism of the upper classes and never dares to go anywhere near the lynch mobs and murders of the Deep South – this is a film that never dives deep with anything and in the end wraps up the instinctive racism and suspicion of Tony’s family in a neat bow and a family dinner with the whole cast. To this film, progress is the name of the game and racism a problem that we are well on the way to solving (again the contrast between this and Spike Lee’s work is really, really striking).

Since the whole film is told from the perspective of Tony – and since the film makers never bothered to consult with Shirley’s family at all, basing all their research on only one side of the story – we never get a real feeling of knowing exactly how Don Shirley might have felt about the attitudes he dealt with, or the reasons behind why he chose to undertake a tour of the Deep South to deal with them, or what he hoped to gain from it. In what should be his own story, he’s a supporting character.

Worse than this, it’s Don who largely seems to need to learn lessons. A dignifed, rarified, dandyish, upper-middle-class near-snob, it’s Don who the film suggest doesn’t understand black culture. It falls to Tony to teach him about everything from black culture: Don’s never heard of Aretha Franklin or Little Richard, never eaten fried chicken, and is deeply uncomfortable around any other black person he meets (unlike Tony’s easy rapport with his fellow drivers, all black). There is a fascinating film to be made here about a man who was at multiple different junctions of minorities – an upper-class black man out of touch with his fellows, a gay man in 1960s America, a black man in the Deep South – but the film doesn’t want to tell that story. I’m also going to leave it out there that only very short shrift is given to black culture (defined by 3-4 things) or Don’s argument that not all black people ipso-facto should like the same things.

Tony on the other hand doesn’t really need to learn anything. An opening scene has him uncomfortably throwing away two glasses used by black-handymen working in his home. But this is literally the last racist action or thought he has in the film – and seems like something that comes completely out of left field. He has no objection to working for Shirley, gets on fine with black people, reacts with increasing anger to racially tinged threats and insults etc. I can understand a son writing a script about his father not wanting to show anything unsympathetic, but the glass scene clumsily sets up an obstacle in Tony’s character that never needs to be overcome.

Instead Tony’s real problems with Shirley are based around class. He thinks he’s a snob. As soon as Shirley lightens up a bit, Tony treats him fine. He even happily accepts his homosexuality and playfully accepts some tutoring to improve his gentility. Tony is an overwhelming force for good who rarely says or does anything remotely unsympathetic.

Farrelly’s film is simple and forgettable in the extreme, but it’s enjoyable enough and passes the time. This is largely because of the two leads. Mortensen’s performance skirts around parody but has such larger than life joie de vivre you hardly mind. He’s very funny and also rather endearing and utterly convincing. Ali mixes in some genuine emotion and loneliness in amongst the more obvious class-based imperiousness. It’s enough that you wish we had got to see that slightly more interesting story under the surface. Green Book is utterly unchallenging and totally gentle. Nothing wrong with that, but it will fade from your memory as soon as the credits roll. Except with its bizarre Best Picture win it’s now a permanent piece of film history.
Email ThisBlogThis!Share to TwitterShare to FacebookShare to Pinterest
Labels: Best Picture, Linda Cardellini, Mahershala Ali, Peter Farrelly, Road movie, Social issues, Viggo Mortensen