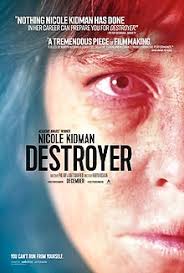 There are few things that pique the interest of reviewers and viewers more than a celebrated Hollywood star going well against type, looking rough, playing tough and letting those shades of grey flow freely. That’s the cheap interest in Destroyer, Karyn Kusama’s engaging, well-made thriller which showcases the sort of way-against-type performance by Nicole Kidman that practically demands the poster scream “Kidman as you’ve never seen her before!”. Of course this all serves to obscure that Kidman is a damn fine actress and a committed performer, and she gives it everything in this grimy, underworld thriller of compromised cops and ruthless robbers.

Erin Bell (Nicole Kidman) is a detective with a shady past: an undercover operation with an FBI Agent Chris (Sebastian Stan) which went wrong 15 years ago. In the present day, the body of a John Doe in Los Angeles opens up links to this case from the past, causing Erin to start a rogue investigation into her old undercover days and the gang members she knew back in the day, specifically her long-held grudge against the psychopathic Silas (Toby Kebbell).

Destroyer gives us a familiar story – the cop with the dodgy past, gone to seed, playing against the rules, tired of life, with a shattered family background, investigating what could be one last case that has devastating links to the past – but presents it from a slightly new angle by making the protagonist a woman. This calls for a terrific performance from Nicole Kidman, who is bashed up, run down, grouchy, seedy and above all immensely damaged. Kidman’s skill at a performer is evident in every scene, creating a character who cannot escape from the burdens of her past, who rejects all help and who is unable to live with the burden of some sort of unspecified guilt.

Much has been made of Kidman’s roughed up, broken nosed, run down, alcoholic appearance (the film gets a lot of mileage over close ups of her ravaged, aged, alcoholic’s hands), but her commitment to the role transcends any deliberate slumming. She is completely believable as the sort of rough-and-tumble, rule breaking cop. The make-up also means that the flashback scenes to a 15-years younger Erin are immediately clear – and give us a clear indication of how far she has fallen since her more hopeful days.

The film is all about the burden of the past, and the film constantly flashes back and forth between the present day and Erin’s time undercover. The film carefully and slowly unveils the exact reasons for Erin’s guilt and why she has become the person she is, but the burden of it hangs over every scene in the present and is visible in Kidman’s eyes in every scene. It brings these themes to life extremely well and weaves an engaging story, even if everything in it seems like a collection of familiar events from other films.

In fact that is the film’s biggest weakness, right there. Many of the events, characters and themes in it feel like they have been plucked from a range of noir thrillers, thrown up into the air, and then reassembled into a new patchwork. As impressive as Kidman’s character is, it’s familiar to us from any number of hard-boiled cops past. The film’s structure – of Kidman going from contact to contact to get closer to Silas – basically allows for a series of actors to give performances that, for all their skill, end up feeling like a random collection of stock characters. None more so than Silas himself who, despite Toby Kebbell’s best efforts, is a totally forgettable rent-a-psycho. But then you can say the same for Tatiana Maslany’s aged junkie and, for all his slimy excellence in the role, Bradley Whitford’s sleazy money launderer. Other characters feel the same as well, from Kidman’s troubled teenage daughter, her would-be gangster boyfriend, Erin’s put upon ex-partner or her wearily understanding partner. These people all seem, to various degrees, to be stock caricatures rather than characters.

What really makes the film work is the dynamic, often hand-held, kinetic energy of Karyn Kusama’s direction. Jittery, immediate and very real, Kusama makes a number of these stock situations – from shoot outs to roughing up suspects – look at least new and exciting. The two main shoot outs in the film are extremely excitingly done and make for gripping set pieces, with the added originality of seeing the main players being women.

But the film itself is just a little too obvious and stock for it to really stand by itself, for all the quality of the direction and the excellence of Kidman. There are some moments that work brilliantly with the unexpected twist of having a woman in the lead role and seeing Kidman throw herself into a gunfight with a heat-packing disregard for her own safety is all the more electric for it. But it’s still a little too predictable and familiar – for all the fact that there is a decent semi-twist towards the end that reveals not all is as we thought at the start – which perhaps doesn’t make it a film for all time.
Email ThisBlogThis!Share to TwitterShare to FacebookShare to Pinterest
Labels: Bradley Whitford, Karyn Kusama, Nicole Kidman, Scoot McNairy, Sebastian Stan, Tatiana Maslany, Thriller, Toby Kebbell