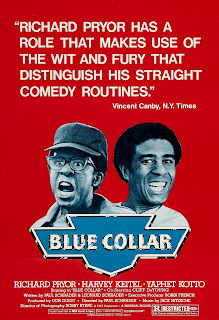 America doesn’t really have a director like Ken Loach. It’s one of the points raised on Indicator’s excellent (and essential) blu-ray release of Paul Schrader’s near Marxist drama about blue-collar car workers in Detriot. There aren’t many (or indeed nearly any) American films I can think of that take the stance of the working man like this one – or as angry, pissed off, furious and, in the end, as lacking in hope as this one. Which makes it sound like the sort of film you’d run a mile from actually seeing. Well you’d be wrong: this is a blistering, intelligent, witty drama crammed with brilliant scenes and great performances. On so many levels it’s something really quite special. It's a shame no one saw it (I blame the publicity campaign - I mean look at that rubbish poster that basically suggests you are in for Pryor stand up routine).

In a car factory in Detriot, our heroes work in varying jobs on the production line. All of them are unhappy with their lot and feel they get precious little support (or concern) from the union that runs the shop floor. Zeke (Richard Pryor) is furious at the lack of equality and opportunity, as well as defrauding the inland revenue with a (literally) childish scheme to try and make ends meet. Jerry (Harvey Keitel) is drifting through his life, unable to afford the dentistry bills to give his daughter the braces she needs. “Smokey” (Yaphet Kotto) is an angry proto-anarchist who just wants to stick it to the man. When the three of them realise there is a safe (probably) full of cash in the union office, they decide to steal it. However, rather than cash, they find the safe full of accountancy records of the union’s dodgy money laundering arrangements with organised crime. The men decide to offer to sell it back to the union – and open up for themselves a world of trouble…

Blue Collar is a hard to categorise film. It’s a brilliant hotch-potch of several genres. It opens like a workers film, crammed with an angry wit (the opening half hour is very funny) with several scenes that acutely skewer the petty clashes of working life as well as the corner-cutting financial desperation of men trying to make ends meet. The opening scenes have the edge of a raw black comedy to them, mixed with observational realism. Then the film subtly changes over, becoming first through near-caper (the hilariously bungled attempt to steal the safe), into politics as the union and the men begin to shift alliances, into a straight classic 1970s conspiracy thriller (complete with late car chase and an outre death for one of the characters) before finally wheeling back round into a tub-thumbing condemnation of the “divide and conquer” plans of the ruling classes.

That’s a lot for any one film to try and squeeze into a less-than-two-hour runtime, but Schrader manages it with aplomb, juggling this mix of styles and genres with such effective skill that you almost don’t even notice as the film grows increasingly darker and more dangerous as it progresses. The eye it has for the rhythms of factory life seems perfectly judged, and the mixture of hacks, place men, agitators and uncaring union men feels absolutely perfect. It also brilliantly captures, in his dialogue, the natural force (and crudeness!) of working men’s conversation, with a brilliant ear for the semi-articulate astuteness and poetry it can reveal.

Schrader builds the pressures up in the film subtly and brilliantly, so that it seems both sudden and perfectly natural as the three men begin to buckle and turn on each other. This is where the Marxist message of the film starts to come in: even when working men have the whip-hand, their superiors will find a way to make them turn on each other, to make them unable to throw off the shackles that bind them as they are unable to work together. On top of this Schrader throws in a brilliant analysis of everyday racism and racial tension (all the union reps and their foremen are of course white), and there is an unspoken edge of racial divide in every conversation – indeed racism is just one of many weapons, the film argues, used to turn working men against each other. This really comes out in the film’s final scene, where two characters who had only warmth and affection for each other at the start are driven to turn on each other with an onslaught of racist fury.

Of course that clash probably carries a lot of its force from the fact that the three leads couldn’t stand each other on set. Pryor, Keitel and Kotto were each told that they were effectively playing the lead in the film and were unaware until signing on of the presence of the other actors. This billing tension was fuelled by their incompatible working methods: in particular Keitel, a theatre trained actor, preferred multiple rehearsals before takes while Pryor, a stand up comedian, preferred minimal or no rehearsal – and usually peaked on the second or third take. Throw in the drugs (that Pryor certainly was indulging in) on set and the three actors reached the point where they could barely stand to be in the same room together (one of the film’s best sequences, a single shot where they sit on the sofa for a long take and plan their next move, was only filmed because the three actors arrived separately, didn’t speak until the camera rolled, and then immediately left). 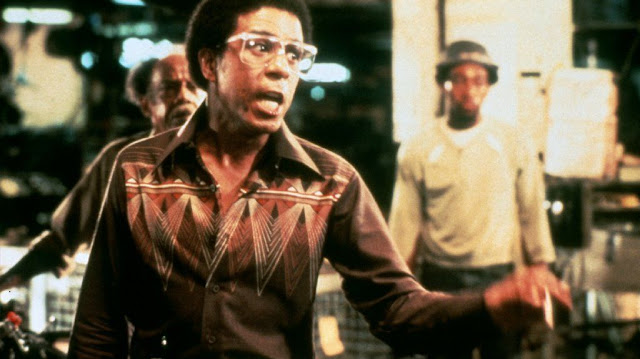 Did this edgy fury boil over into their performances and give them an extra fire? Certainly I don’t think any of them were better than they were here. Kotto has such an electric, bubbling fury to him, an anarchist’s delight at danger, that he feels like a force of nature. Keitel hadn’t been so gentle, reserved and bemused by the world for years, as an oppressed everyman. But the real electricity comes from Richard Pryor is a goddamn revelation as Zeke. What Schrader did so brilliantly here was to capture all the fire, energy and angry of a typical Pryor stand-up performance and channel it into a dramatic structure. An early Zeke rant against the unions is essentially a Pryor stand-up performance, and Pryor’s whole performance buzzes with an improvisational energy.

Zeke is the film’s key character. At first he seems the weakest and most desperate of the three men, the one most likely to fall into the role of victim. But as the events take hold of the three men, his character deepens and develops to reveal a shrewdness, a realism and even a coldness that the other men don’t possess. Unlike them, he sees events not as a chance to make a quick buck but as a genuine moment to change his life for the long term. And, underneath this, an understanding that as a black man opportunities for him are going to be few and far between. An electric confrontation between him and Jerry late in the film on Zeke’s porch hums with his fury driven realpolitik, Zeke’s understanding that opportunities are there to be seized and that sometimes the price paid is high.

Blue Collar gave Schrader a break-down when he made it. But its’ a masterpiece of political cinema, largely because it never really feels like a political film. Instead it feels above all like a domestic drama of friendship marred that explodes into a thriller., But it’s the understanding of the social situation of these men, of the reasons behind their actions and the intelligent analysis behind it, that makes it really work. It also gives you characters who feel real and in whom you invest, blessed as well (for all their clashes) with three career-best performances from the leads. It’s a brilliant film and in a just world should be seen as a landmark piece of film making.
Email ThisBlogThis!Share to TwitterShare to FacebookShare to Pinterest
Labels: Cliff DeYoung, Ed Begley Jnr, Harvey Keitel, Lane Smith, Paul Schrader, Richard Pryor, Social issues, Yaphet Kotto