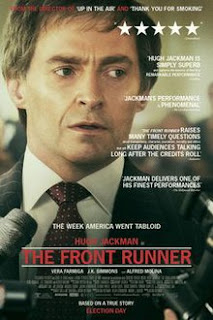 In the 1988 Democratic primaries, Gary Hart (Hugh Jackman) was the man to beat: a telegenic liberal with an attractive programme of policies and a forward-thinking vision for America. No one could beat Hart. Except for Hart himself. A man with a history of affairs, he became embroiledin a sex scandal after an ill-advised friendship (the film is coy on taking a stance on whether this friendship was sexual or not) with a young woman, Donna Rice (Sara Paxton). Angrily denying anything was going on, Hart unwisely challenged journalists to follow him: which the Miami Herald did, soon finding Hart had skipped campaign events to invite Rice to come and stay with him at his Washington home for a long weekend… Cue a media snowstorm and an imploded campaign.

Reitman’s film is a pretty decent chronicle of this early media sex scandal. I say pretty good because it does what it sets out to do with a solid observation of the facts and a general even handedness between Hart and the media. However it never really quite sparks into life, and Reitman’s attempt to make this story into something with huge relevance for how the modern media has developed, and how the world of politics has led us to Trump, just doesn’t really work.

What the film instead becomes is a slightly dry but enjoyable enough docu-drama, that covers a period of history that should feel tumultuous and should create a sense of setting the table for the future but doesn’t. The idea that it was only at this point that American politicians suddenly had interest from the press in their personal lives is nonsense for anyone who had even a passing knowledge of the careers of Kennedy and Nixon. The film’s attempt to make us sympathise with Hart is also undermined by the high-handed arrogance with which he treats even the slightest inquiry into his personal life from anyone, be it press to members of staff who simply want an explanation of why their leader consistently demonstrates such astonishing poor judgement.

This is despite a decent performance of charisma from Hugh Jackman, possibly better than Hart deserves. The film does demonstrate – amidst its general sympathy for Hart – his willingness to throw Donna Rice under the media bus and his stubborn refusal to acknowledge any wrong-doing on his own part. I can’t say I actually really felt much sympathy for him over the course of the film, which I’m not sure was the film’s intention.

Neither did I really feel the film really skewered journalism. I think it wants to lay a suggestion that this was the first descent on a slippery slope, where gutter press, personality led journalism led to only egotists of mediocre talent wanting to take on the challenge of running the country. Or rather, that we get the politicians we deserve. While you could say there is some merit in this, I’m not sure this film manages to present that fully (Hart’s behaviour is at least partly self-destructive and would have been in any era) or that it really establishes that we are living in the shadow of times like this. And the investigation into Hart's lies and evasions is hardly gutter press journalism. Neither does the film make a real case for Hart being some sort of potential great leader: while he has some decent, liberal, ideas he's also short-tempered, lacks focus and has a tendency to snap at or cold shoulder underlings.

A bit of spin in the movie is got out of Jack Kennedy’s numerous affairs not being covered by the press. And while that is true, this seems less because of a natural shyness of the press, but rather because Kennedy was more astute at making friends in the fourth estate, and more willing to share parts of his life outside politics with them for stories (essentially, he made news for the press, making them more willing to keep quiet about his adulteries, while Kennedy avoided doing anything too blatant that the press would find impossible to ignore). Hart’s real problem was less that he was in a more censorious or gutter press era, and more that he was inept at press (and people) management, treating those around him with high handed contempt, mixed with challenges and threats. The film could almost be a textbook on how not to use the media.

It’s telling Hart’s only real relationship with a reporter in the film is with a young, impressionable (and fictional) Washington Post journalist (played very well by Mamoudou Athie). Hart comforts him through a mild panic attack during a flight and they develop a friendship, which I think the film wants us to think the journalist betrays by asking Hart the difficult questions about his lack of faithfulness and proclivity for affairs (all pretty well documented historically). I’m not sure that is the case. Surely, by this stage almost any thinking human being in the States was asking these questions, and by putting them to the candidate, surely this journalist was simply doing their job? The “tragedy” of Hart was his incompetence at working with people, rather than his questionable private activities being brought to light.

The film struggles with all these themes and I don’t think it really successfully tackles any of them. The case it tries to set out doesn’t really work and, despite some fine observational moments of politics in action and a good performance from Jackman, it never really takes flight as it should. It’s a decent effort but a misfire.
Email ThisBlogThis!Share to TwitterShare to FacebookShare to Pinterest
Labels: Alfred Molina, Biography, Box office bombs, Hugh Jackman, Jason Reitman, JK Simmons, John Bedford Lloyd, Kevin Pollak, Mamoudou Athie, Political dramas, Sara Paxton, Vera Farmiga