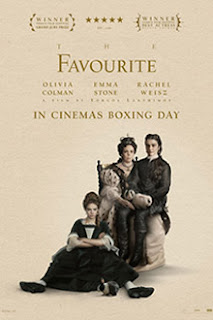 Looking around the cinema, I couldn’t help but wonder how many of the audience were expecting The Favourite to be a Sunday night-style costume drama about Queen Anne. Goodness only knows what they made of this skittishly filmed, acidic, sharp-tongued, very rude drama about squabbles in the court of Queen Anne. The Crown it ain’t.

In 1708, the court of Queen Anne (Olivia Colman) is dominated completely by her head of household, chief advisor, secret lover and domineering best friend Sarah Churchill, Duchess of Marlborough (Rachel Weisz). But Sarah’s control over Queen Anne is set to be challenged by the arrival in court of seemingly charming, but in fact ruthlessly ambitious, cousin Abigail Hill (Emma Stone), a former aristocrat who has fallen on hard times. Soon Sarah and Abigail find themselves in the middle of a bitter, ruthless clash for control over Anne – who, seemingly weak-willed and disinterested in government, in fact takes an eager pleasure from the rivalry of the two women.

The Favourite is a brilliant, acerbic, very dark comedy that treats its period setting with a hilarious lack of reverence. It’s a frequently laugh-out loud comedy, with its often foul-mouthed dialogue just on the edge of being anachronistic (a trait that also comes into the hilarious non-period dancing). It takes a moment to tune up, but leans just enough on the fourth wall to work. Lanthimos’ film doubles down on the insane pressure bowl of Anne’s courts, turning the court of the 1700s into a bizarre, semi-surreal state where you have no idea what insanity you might see around the corner – from racing ducks, to rabbits roaming free, to a naked man being pelted with oranges.

But then this is the sort of bizarreness that stems from the top, and Olivia Colman’s Queen Anne is a domineering eccentric. In a film-career-making performance from Colman, her Queen Anne is part infantalised puppet, part needy insecure lover, part bitter control freak. Anne will change from scene to scene from a furious, knee-jerk rage to a weeping vulnerability. Her interest in actually ruling the kingdom has been largely beaten out of her, but she still needs to feel that she holds the power. With her body raddled with gout, Anne alternates between demanding independence and being wheeled from place to place. Colman’s performance bravely skits between temper tantrums and a desperate, panicked loneliness and sadness – it’s a terrific performance.

A woman as uncertain and unhappy in herself as Anne is basically pretty ripe for control and manipulation. History has not been kind to Sarah Churchill, who is often seen as a ruthless, power-hungry manipulator only out for what she can get, obsessed with the power her role brings her. This film takes a different, more interesting slant, thanks in part to Rachel Weisz’s superb performance. Weisz plays Churchill as a strong-minded, hard to like woman, who has a genuine bond with Anne, but honestly believes she is better suited to execute the powers of royalty than her lover. But that doesn’t stop her having feelings for her – or priding herself on refusing to lie to Anne about anything (from her appearance to her behaviour). But this doesn’t stop Sarah from ruthlessly bullying Anne or threatening her – though she’s equally happy to climb into bed with her when required. 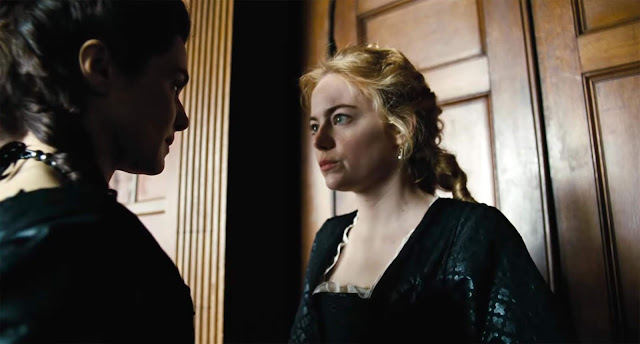 But Sarah Churchill here is doing the things she is doing because she honestly believes that it is what is best for the kingdom and (by extension) Anne, and the moments of shared remembrance between Anne and Sarah have a genuine warmth and feeling to them. Which makes her totally different from the ruthless Abigail, played with a stunning brilliance by Emma Stone. Abigail doesn’t give a damn about anything or anyone but herself: something the rest of the servants in the household seem to recognise instinctively as soon as she arrives, but a danger Sarah doesn’t detect until too late. Abigail’s every action is to promote her own wealth and prestige, and she’ll do whatever it takes to do that, from crawling through the mud for herbs to crawling between the sheets to pleasure Anne at night. Stone’s Abigail is ruthless, self-obsessed, uncaring and on the make in another terrific performance.

The film focuses in large part on the see-sawing fortunes of these two rivals for the role of favourite – with Anne as the fulcrum in the middle. The film is split into eight chapters, each of which is opened by a quirky quote from the chapter itself. It neatly structures the film, and also gives it a slight off-the-wall quality. The film is packed with electric scenes, as the women wear the trousers in the court (often literally, in Sarah Churchill’s case), riding and shooting in their spare time and slapping down the assorted politicians and lords desperately trying to promote their interests on the edge of the court. This battle of wits and wills is a fabulous, increasingly no-holds barred, rivalry that motors the film brilliantly.

Lanthimos loves every moment of scheming and double crossing the film supplies. He shoots the film with a selection of low-angle and fisheye lenses, which make the palace settings seem as imposing, large and domineering as possible – and also distorts the world just as the feud between the two women is doing. The film looks fabulous, with its intricate design and it's candle lit lighting. Lanthimos' court always looks gloomy and secretive, with only a few spots of orange warmth. 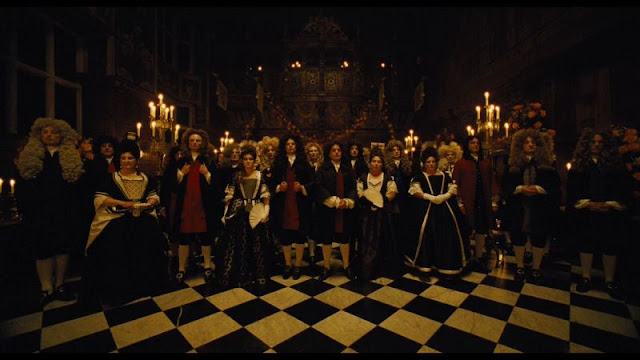 Lanthimos also understands that there is very little room for sentiment or feeling here, and the flashes of it we get are never allowed time to really grow. That's not a negative of course, as this sharp comic drama is also an arch commentary on some of the selfishness and distortion of events that lies under politics (sound familiar?), with the interests of the ordinary people of the realm raising very little interest from any side on the political divide. And Anne is such a bizarre character, so pulled between pillar and post, so desperately unhappy so much of the time, so utterly spoilt the rest, that you understand how she has become such a chew toy for court faction, and why she is happy to tacitly encourage this world where her every whim is played to for advantage.

I laughed out loud several times during The Favourite. It’s obvious to say that it feels like a film for the #metoo era – but it certainly has three fabulous, brilliant, hilarious and strangely heartfelt performances from its three female leads, three of the best actresses in the business. Wonderfully directed, beautifully written and fabulously designed, this is properly fantastic cinema.
Email ThisBlogThis!Share to TwitterShare to FacebookShare to Pinterest
Labels: Emma Stone, Historical epics, James Smith, Joe Alwyn, Mark Gatiss, Nicholas Hoult, Olivia Colman, Rachel Weisz, Yorgos Lanthimos