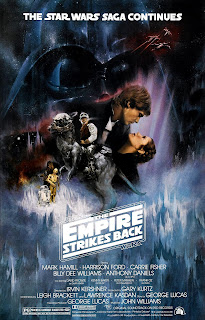 As Star Wars sprawls into a massive Disney money-spinning franchise, for both fans and producers alike the original trilogy is increasingly becoming like Holy Texts, the events and characters of which must guide all future films. And of all these, none of them is holier than The Empire Strikes Back. It’s odd to think that the initial reaction to this sequel was a bit mixed at the time, since this is not only the very finest of all the Star Wars films, but also one of the best genre films ever made, one of the greatest sequels ever made – in fact one of the best, most consistently rewarding films you are ever going to see. It’s going to be loved forever, any critical view is almost superfluous. And the reason for that is surely linked to the fact that I’ve seen it hundreds of times and I still love every frame of it.

Anyway, nearly everyone must know the story. Some time has passed since the rebels successfully took out that Death Star. Now they are secure in a new base on the ice planet Hoth, being hunted by the empire in an operation commanded by the feared Darth Vader. When the Empire locates the base, our heroes are separated in the ensuing escape: Luke (Mark Hamill) is guided by the force and the ghost of his mentor Obi-Wan (Alec Guinness) to seek out the legendary trainer of Jedi Yoda (Frank Oz). Meanwhile, Han (Harrison Ford) and Leia (Carrie Fisher) are on the run in a malfunctioning Millennium Falcon, dodging Star Destroyers and eventually taking refuge in the Cloud City of Bespin, run by an old friend of Han’s, Lando Calrissian (Billy Dee Williams). But is this a safe refuge? And what is the secret reason why Vader is so determined to hunt down Luke?

So what is it that makes The Empire Strikes Back so damn good? Well it takes everything from the first film and deepens and enriches all the characters and themes that that film explored. While you could say Star Wars is the quintessential romantic space opera – part Western, part fairy tale legend – it’s also a feel-good fun ride. Empire is a rich, complex and endlessly rewarding film that takes all its characters and turns them into fully rounded and intriguing personalities. When you think about the turmoil and struggles each of them goes through in this film – from Luke, through Vader even down to C-3PO – it’s not hard to see why these characters have worked their way into the hearts of every viewer. We see them all go through huge amounts and we learn and discover things about them in every frame. It’s fascinatingly well done storytelling and brilliantly structured character building. 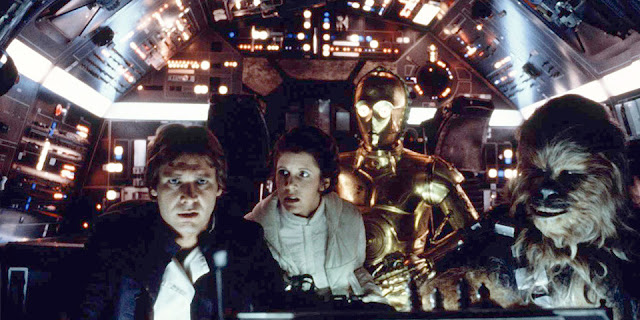 In fact the whole film is a triumph of investment. Even more than the first one, we get a real sense of the mighty ruthlessness of the Empire (staffed exclusively it seems by British character actors from 1970s TV), of its resources, its willingness to do anything. Even more than in the first film, the odds seem piled against the rebellion, with the limited ship, tiny fire power, the fact that our heroes spend virtually the entire film either running, hiding or captured – how can you not feel the pull of wanting to take up this romantic cause eh?

Perhaps it works so well as Lucas handed over much of the on-the-ground-floor creativity over to other people (you only have the watch The Phantom Menace to see what happened when he took all these reins back up again). The witty, energetic, fun script – packed full of lines that trip off the tongue, and character moments that feel real and human – is by Lawrence Kasdan. Directing meanwhile is handled by Irvin Kershner, a middle-of-the-road director who taught Lucas at film school but here seems to transcend his abilities to deliver a true masterpiece, with all the thrill of a teenager finally given the keys to the big car.

Kershner can handle all the spectacle, but like no other movie in the series Empire works because it’s rooted in the small-scale, in the reaction shot, in the camera soaking up the actors. There are so many shots of actors looking at things in this movie (I think they all have significant moments of this) while we see their thoughts and emotions play across their faces. Kershner never forgets that this is a story about people not about bangs and whizzes in space. In doing that, in making this a brilliant character drama, he really turned Star Wars into not just an adventure but a series where we invested heavily in these people. There is a reason why the modern films come back time and time to the characters from this film: Empire really made us care about them, turned them into family members, people we’d seen through highs and lows. We see them in a modern film and it's like greeting long lost friends. 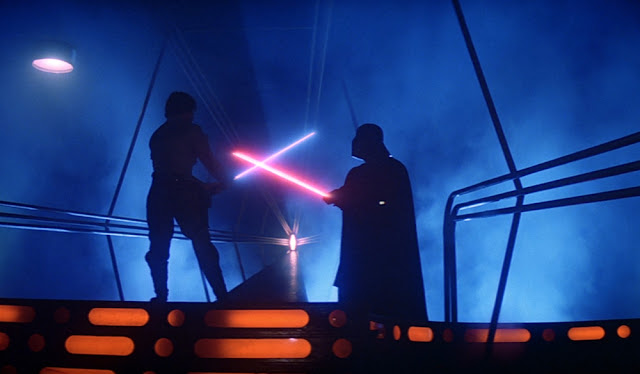 And it helps that the stars give their best work here. Harrison Ford may never have been so cocksure, so cool but also strangely vulnerable and lovable. While in Star Wars he was used to puncture the grandeur, here he’s got a put-upon vulnerability to him, a bravado in his courtship with Leia that hides his touchiness. Not to mention we are constantly reminded he’s a wanted man. Ford also gets massive comic mileage from his exasperation with the constantly malfunctioning Falcon. All this and he never looks flustered: “Never tell me the odds!” indeed! And he gets possibly the best loved line in the whole series with “I know”.

Fisher is equally good as a prickly Leia, who is afraid to let down the imperious commanding cool to let any hint of feeling and emotion show. Mark Hamill does a very easy to overlook job of emotional commitment as Luke Skywalker – particularly as he spends a large chunk of the film interacting only with a robot prop and a puppet. He sells the conflict Luke is feeling, the clash between doing action that feels right now and having the patience to build his skills. And of course, he sells the anguish of finding out that twist.

Ah yes the twist. Empire was perhaps one of the first films to impose such strict pre-production secrecy onto its key plot development. On set, only Irvin Kershner and Mark Hamill knew that Vader was Luke’s father (no spoiler warning – I think Lucasfilm have well and truly spoilt that one themselves). Dave Prowse, who was not trusted to keep it to himself, to was given a line around Obi-Wan killing Luke’s father (he must have been slightly surprised at Hamill’s reaction, which does seem a bit OTT to that news). But this moment again really, really, really works because it is both a surprise AND something that makes total sense. It doesn’t feel like hints have been dropped through the whole film in advance, but when you hear it you spot them all over the place. It’s also such a brilliant narrative rug pull it has also effectively powered the creation of the prequels and is still central to the new trilogy.

Away from all this, the film is also a masterpiece in pacing and action sequences. It took a lot of guts to put the major space battle at the start of the film, but it works an absolute treat – while also being something completely different from anything in the first film. It looks and feels really cool. And it contrasts perfectly with the smaller scale, more intimate desperation of the escape from Besbin that ends the film, matched with Luke’s battle with a never-more-imposing Vader. I’ll also mention as well that John Williams’ score for all these sequences is practically perfect in every way, adding no end of tension, emotion and excitement to all these sequences.

And it’s the fact that you get all this, mixed with a real, genuine investment in all the characters (good and bad), that really makes the film work in a way that no other Star Wars film has quite managed since, and that makes this the crown jewel in the franchise. It’s one of those serendipity projects where everything fell into place, everyone brought their best to it, and the stars aligned. It’s lightening in a bottle, and the franchise has used it ever since as its setter for everything from tone to plot developments. You will rarely find anything as fun, or widely loved, as this film.
Email ThisBlogThis!Share to TwitterShare to FacebookShare to Pinterest
Labels: Action Films, Alec Guinness, Billy Dee Williams, Carrie Fisher, George Lucas, Harrison Ford, Ian McDiarmid, Irvin Kershner, James Earl Jones, Mark Hamill, Science fiction, Star Wars