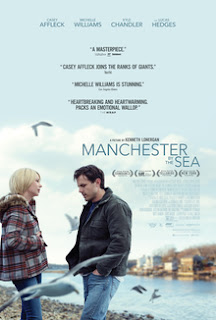 There are many films that front and centre the catharsis of overcoming grief. You know the sort of thing: the feel-good story of someone dealing with the impact of crushing events to emerge renewed and with a certain level of acceptance for the hand that life has dealt them. It’s rare to have a film that takes a very different approach – for it to tackle grief and the impact it has as a never-ending burden on your life, like a companion that will stay with you forever but which you must accept will colour every moment for the rest of your life.

Lee Chandler (Casey Affleck) is a quiet, inexpressive handyman in Boston who seems to be barely keeping under control a temper that explodes in the odd unprovoked barfight. Content to let his life drift away in a dead-end, poorly paid, job, Lee is summoned back to his family’s home in Manchester by the Sea, a coastal town in Massachusetts, after the death of his brother Joe (Kyle Chandler) from a heart condition. Much to his surprise, he discovers that Joe has named him as the guardian of Joe’s teenage son Patrick (Lucas Hedges). But Lee has no intention of remaining in this forced parental role – or of staying in Manchester by the Sea, his former home until he suffered an unbearably tragic loss for which he blames himself.

Manchester by the Sea seems ripe for setting up as a conventional tale of grief. All the ingredients are there: the man who is thrown together with a young teenager, the terrible tragic background event that he can never forget, the bottled up emotions that seem to be crying out for a big “cathartic” moment where all those emotions can be let out, a possible father-son relationship developing that can lead to Lee re-engaging fully with the world… It’s a testament the film’s courage that it avoids nearly all of these completely. Instead it offers a picture of life’s tragedy that feels human, studied, earned and above all real.

For starters, Lee is consumed with grief – and is unable to move on from it. This becomes much easier for the viewer to understand once we are introduced to the reason for his tragic mood halfway through – although hints have been dropped in flashbacks that are brilliantly woven (seemingly at random, but in fact with great thought and planning) throughout the film, where he has a wife and three young children. Saying that, the horror of what actually happened – and the gut wrenching sense of personal responsibility that Lee feels – are truly chilling. Is it any wonder with all of this that Lee can’t or won’t (or both) allow himself to move on?  That he clearly believes grief is his “sentence” for his “crime”, which has so shaped his entire life? No it really isn’t.

Lonergan’s film (and his brilliant script, one of the sharpest, tenderest and most humane modern film scripts you will read, with all the depth of a fabulous novel) explores wonderfully the contours of this human situation. There are no easy answers, no real relief and no simple emotional release. Instead this film shows that grief and guilt – certainly on this scale – never go away, that although you allow yourself moments of happiness, the shadow of the past never really leaves.

This makes the story sound incredibly bleak, when in fact it really isn’t. Among the many triumphs of Lonergan’s film is how funny this is. This humour is not always black (though it is tinged in places) but comes from Lonergan’s Mike Leigh or Alan Bennettish ability to neatly observe some of the absurdities of human interaction and everyday conversation. He understands that the mundanity of the everyday can carry huge emotional and comedic force for people, because it stems from situations we can all (to certain degrees) experience and understand. It’s those moments of recognition as Lee and Patrick struggle to get on, or when Lee is brought low by sudden memories that really speak to the viewer, which make this such a profound and often engaging viewing experience. Not to mention that Lee’s often blunt plain speaking frequently raises a chuckle, not least due to Patrick’s often exasperated plea as to why he can’t be “normal”.

But then Lee isn’t normal – he’s carefully suppressed his inner feelings as a protection measure to stop him from exploding in self-destructive guilt. It’s a performance from Casey Affleck that might just be one for the ages: a surly, buttoned-down man of low-key aggression and impatience which covers a deep and abiding sense of guilt and shame that he can’t seem to put behind him. He’s superb, and the performance is all the more admirable for the bravery of how Affleck does not fall back on actorly tricks and emoting. Instead his performance throbs with unspoken pain.

But then Affleck is one of several superb performances. Lucas Hedges is a revelation as a son who can’t articulate his feelings about his father’s death and his resentment and pain around it. Hedges and Affleck spark off each other with great effect, with scenes that alternate between hilarity and raw pain. Michelle Williams is also sublime in a carefully underused part as Lee’s ex-wife. Williams shares one particular beautiful scene with Affleck – one tinged with fabulous notes of sadness and regret – that is nearly worth the price of admission alone. But no one puts a foot wrong here.