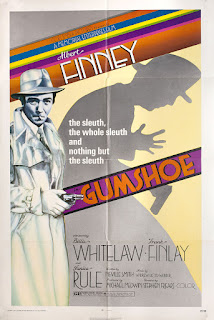 Film noir is a genre beloved by many, and – with its many conventions and, in particular, its hard-boiled Chanderlesque style – it’s also ripe for parody. That’s what Gumshoe does here, transplanting the rough, grimy mysteries of Philip Marlowe and Sam Spade to Liverpool in the 1970s. In doing so, it allows Albert Finney to let rip with the sort of hugely enjoyable personality performance that plays to his strengths.

Finney plays Eddie Ginley, a would-be comedian and entertainer in his thirties, obsessed with Chandler and Hammett. Placing an advert in the paper offering his services for private investigations in the spirit of a lark, he finds himself hired to look into a decidedly complex affair concerning a female lecturer, a fat South African, an occult bookshop, an unhappy South African political refugee and quite possibly his brother William (Frank Finlay) and his old flame and now sister-in-law Ellen (Billie Whitelaw).

Gumshoe is a an enjoyable, small-scale, cine-literate drama, with a playful script by Neville Smith that has a wonderful ear both for the style of Hollywood detective drama, and the streets of Liverpool – and knows how to mix them together. Shot simply by Stephen Frears (who rather sweetly claims on the blu-ray documentary to not have had a clue what he was doing), the film rattles along with a few good jokes, some decent set-ups and an actually rather good mystery. It largely falls just the right side of parody – not too smarmy, affectionate enough but never taking itself too seriously. It’s a very well judged pastiche - and it's also a pretty damn good mystery itself.

The film was somewhat of a passion project for Albert Finney (his production company put up much of the funding).  And you can see why, as Finney is excellent – relaxed, smart and funny. Eddie Ginley is part dreamer, part realist trying not to see the truth around him. He knows this world of detecting is partly a game, partly dangerous, partly a fantasy – but he wants to enjoy while it he can. Finney also clearly enjoys the sort of Marlowesque dialogue, just as he gives real emotional depth to a man who has always been looked down on by his brother, and jilted by his girlfriend for said brother. It’s one of his best performances, he’s outstanding – a charming, playful, warm and also super-smart and cunning performance.

The rest of the film gives playful highlight moments for a number of performers, wrapped up in the enjoyment of the material. Finlay does a decent job as a stuffed-shirt straight man, Billie Whitelaw enjoys a sly parody of any number of femme fatales from 1940s movies, and Janice Rule is intimidating as a very different type of suspicious female. The best supporting performance however comes from Fulton Mackay as a brusque but wry Scottish hitman, tailing Ginley throughout the film to reclaim money he feels is owed to him.

It’s a shame that a fun, playful and engaging film has in some places dated so badly. Not least in its language aimed at a black heavy Ginley gets into a scrap with. Intimidated and off-guard, Ginley falls back onto banter aimed to put the heavy off balance – but which listened to today is basically a string of vile racial slurs using words like jungle, bananas, trees etc. etc. etc. And the attitudes are repeated time and again in the film, with the character constantly referred to in the most derogatory and racialist terms. Mind you at least Oscar James as the butt of this gets a neat dig at Ginley hardly being "the Great White Hope" after a brief bout of fisitcuffs.

It’s an interesting sign of how dated the film is that the villains are racist apartheid South Africans, Finney was at the time a leading campaigner against Apartheid, but neither he nor the film clearly  put calling a black man a monkey into the same bracket as that bigoted system. No one involved really is a racist, not even the characters – it just wasn’t deemed a problem to say those things in the 1970s. (Even the booklet in Indicator’s excellent blu-ray dwells on this uncomfortable dated material).

But, bench that from your mind, and you’ve got a charming, fun pastiche that pokes a lot of fun at Bogart and Chandler. The make-believe fun of Eddie’s Marlowesque hard-boiled dialogue is constantly punctured by him having to explain what he’s trying to say. The film has a lot of fun with the details of a mystery, but still keeps that smart sense of tongue-in-cheek. It’s packed with some excellent lines and some sharp performances. Finney is superb. It’s a pastiche and an affectionate homage of a whole genre – and, although it is old-fashioned and feels a bit dated, it will I think stand up to re-watching.
Email ThisBlogThis!Share to TwitterShare to FacebookShare to Pinterest
Labels: Albert Finney, Billie Whitelaw, British Films, Comedy, Detective story, Frank Finlay, Fulton Mackay, Janice Rule, Murder mystery, Stephen Frears