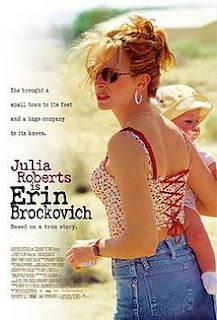 When Steven Soderbergh was being celebrated as the Great White Hope of arty American movie making back in the late 80s, it would probably have amazed his fans if you’d told them that 10 years later he would be directing a Julia Roberts star vehicle. But that’s what he pulled off to great effect in Erin Brockovich.

Telling the true story of Erin Brockovich (Julia Roberts), the film follows her life from 1993 when she is struggling to make ends meet while bringing up three small children. After losing a court case – largely due to her brassy foul-mouthedness – she pressures her lawyer Ed Masry (Albert Finney) to give her a clerical job at his law firm. There she finds herself engaged with a simple real estate case involving PG&E, a major gas and electric company. Discovering the company has been polluting the water of the town of Hinkley in California – and left many residents with crippling health problems – Brockovich works to uncover the truth and to gets Masry to agree to build a legal case. She also finds her mouthy down-to-earthness allows her to connect with the people of Hinkley, and she soon becomes determined to get them justice.

The big thing that Erin Brockovich was about when it was released was Julia Roberts. In 2000, it was hard for heads not to be turned by seeing America’s Sweetheart wearing clothing so revealing and provocative it made her Pretty Woman character look reserved. And she swears! Frequently! The film was a triumph for Roberts, turning her from a romantic comedy queen into a serious actress. Roberts won every single Best Actress award going, up to and including the Oscar. And Roberts is very good indeed in the role. Few films have used her effervescence and warmth as a performer so well. You can’t help but side with Julia Roberts when she is firing on all cylinders, no matter what the situation – whether she is a brassy, chippy working mother, a Hollywood actress or a New York City prostitute, you find yourself on her side.

But, looking back at the film now, this role essentially plays to all of Robert’s strengths. While it looks on the surface like a radical departure for Roberts, the film is basically very much in her wheelhouse. In fact, the whole film is almost a writ-large version of that shop scene in Pretty Woman (still one of the best scenes of modern cinema) stretched over the course of a whole movie. Julia Roberts is treated badly by snobby people, she doesn’t let it get her down, and then she returns with a triumphant flourish that puts the snobs in their place.

That’s the whole game from Roberts: this is very much the type of performance she gave in Pretty Woman, Notting Hill and My Best Friend’s Wedding repackaged and given a novel appearance by being placed in a drama rather than a comedy. But all the little acting touches that would be familiar to you from those movies are there. There is nothing wrong with any of this, but the film in fact reinforces rather than refutes the idea that Julia Roberts (like Cary Grant) is largely a personality actor. She has a very skilful and impressive collection of acting touches, but they are pretty consistently the same across films. She performs with brilliant, luminous presence here – and commits fully to the part – but it’s more like the ultimate expression of the roles she played in the 1990s. It’s not a surprise looking back that she’s not had a hit like it since.

The rest of the film is an enjoyable mix of comedy and touches of tragic sadness. Soderbergh packages the film as a very safe entertainment, and its’ entertaining. The real Erin Brockovich claims the film is 98% accurate to what happened to her – which perhaps just makes you think that the clichés of film hew closer to real life than you might expect. Soderbergh doesn’t really have much to say here beyond big corporations and snobbery being bad and to never judge books by their cover. But it doesn’t really matter as the whole thing is presented with a confident, brassy buzz as if it is channelling Brockovich straight into celluloid.

It works all the time because you care about Erin, and you enjoy her company. It touches on some issues around sexism in the work place – although Erin is looked down as much for her working class roots as her sex – but there are elements there showing she is clearly judged by her appearance, and even the big firm lawyer brought in help fund the case can’t resist saying when he sees her “I see what you mean about a secret weapon”. Not that Erin herself isn’t ashamed to use her assets – when Ed asks how she can get people to allow her access to such confidential papers, she deadpans “they’re called boobs, Ed”.

That gives you an idea of the general comedic tone of the movie. It’s matched with a fairly predictable domestic plot-line. I suspect Soderbergh was probably making a bit of a point by turning Aaron Eckhart’s (very good in a nothing role) gentle biker, next-door neighbour, childcare provider and boyfriend into the sort of pleading “Honey please come home for dinner” non-entity that the woman often plays in films like this while her husband crusades. The film does manage to mine a bit of quiet sexual agenda from its otherwise fairly bubbly surface. It also draws attention to the way the film basically sets up Erin’s primary romantic relationship being not with a boyfriend, but with herself as she discovers the sort of person she has the potential to be.

There’s that Pretty Woman parallel again. The film is basically a dreamy re-invention saga, presented with a cool flourish. Roberts is excellent in a role that has become a calling card. She’s also got quite the double act with Albert Finney, who is brilliant as the put-upon, slightly haggard, slightly twinkly Masry who finds his own passion for justice reignited. Finney tends to get overlooked in this film, but he is superb and gives the best pure performance in the film. Soderbergh directs with a professional glossiness, and supplies plenty of heart-tugging victims (Helgenberger is very good as the main victim we see) mixed with punch-in-the-air, she’s proving herself better than them moments from Julia Roberts. It’s a very fun film, and genuinely entertaining. But like Roberts’ performance, it’s presenting old tricks in a new way, not reinventing the show.
Email ThisBlogThis!Share to TwitterShare to FacebookShare to Pinterest
Labels: 2000, Aaron Eckhart, Albert Finney, Biography, Cherry Jones, Courtroom drama, Julia Roberts, Marg Helgenberger, Peter Coyote, Steven Soderbergh, Tracey Walter